Book Reviews (written when it was 40 years since Stuart Christie’s arrest)
Granny Made Me an Anarchist: General Franco, the Angry Brigade and Me by Stuart Christie. Scribner, London, 2004 [and later], 423pp.
A. Originally Published in: LSHG Newsletter Issue 22: Autumn 2004 [slightly edited]
Stuart Christie's memoir spans the third quarter of the twentieth century, and the subtitle alludes to the two episodes when he became spectacularly embroiled with its history: in 1964 he was caught carrying explosives into Spain to facilitate General Franco's assassination, and then, after serving three years of a 20-year sentence and trying to pick up the threads of his life back in Britain, he turned up at the wrong house on the wrong day and was framed as a participant in the Angry Brigade bombing campaign of the early 1970s, only to be acquitted along with three of seven fellow-accused (the Stoke Newington 8).
His Granny comes into it as a strong influence on his childhood, along with other features of working-class life in the west of Scotland which combined to inculcate a social conscience, historical awareness, and a capacity for strict adherence to principles. Not perhaps qualities that are popularly associated with anarchism, but Christie argues his case for adopting that position intelligently, making connections and explaining his political trajectory via CND, anti-war activism, and Labour Party Young Socialists, with a passing attraction to IS (International Socialists) and a more lingering admiration for the Solidarity group. He writes entertainingly, with ever-present humour and a wealth of keenly observed detail that conveys the spirit of the times, places and people, even managing to enliven the grim experiences of prison life, and emphasising throughout the values of comradeship and the will to resist. In a passage worthy of inclusion in "Porridge", he recounts his narrow escape, due to a liking for "The Navy Lark" on the radio, from being scooped up in a botched break-out. He gets the last word on Franco, describing his lingering demise in the last chapter - "Jesus clearly didn't want him as a sunbeam" (p. 422) - but concludes that it was just as well not to have been responsible for his death.
The (wilfully?) anarchically-typed blurb nevertheless states that Christie "still believes in anarchist princles [sic]" and he maintains a kind of defence of political violence as perpetrated historically by anarchists, contrasting their careful selection of individual targets with the mass indiscriminate violence of the state, and by implication differentiating them from the terrorist stereotype of today. At the same time he is ready to criticise the more lunatic manifestations of the libertarian left, as in a certain "mad-house" commune of early-1970s London, and points out the self-defeating impossibility of trying to impose anarchist principles by authoritarian means.
For those who wish to find out more about the background, whether political or cultural, there are numerous inserts in the text, variously supplying historical and biographical detail, theoretical references and extracts, photographs, and the words of protest songs. These stand instead of appendices and footnotes, and the appearance of a non-academic reader-friendly volume is likewise reinforced by the lack of an index or bibliography; while the trimmings may be missed by trained historians, there are chapter headings and marginal subtitles (in small print, like old-fashioned history textbooks) to highlight topics as they come up and guide the eye. All in all it comes over as being accessible without any dumbing down of style or compromise of intellectual content, an achievement which many other historians might envy.
It is not necessary to share all of Christie's views to find this an enjoyable read, to be glad the author survived everything two states tried to throw at him, and to wish it the success it deserves in exposing the machinations of those in power and expounding a radical alternative vision to a wider audience. 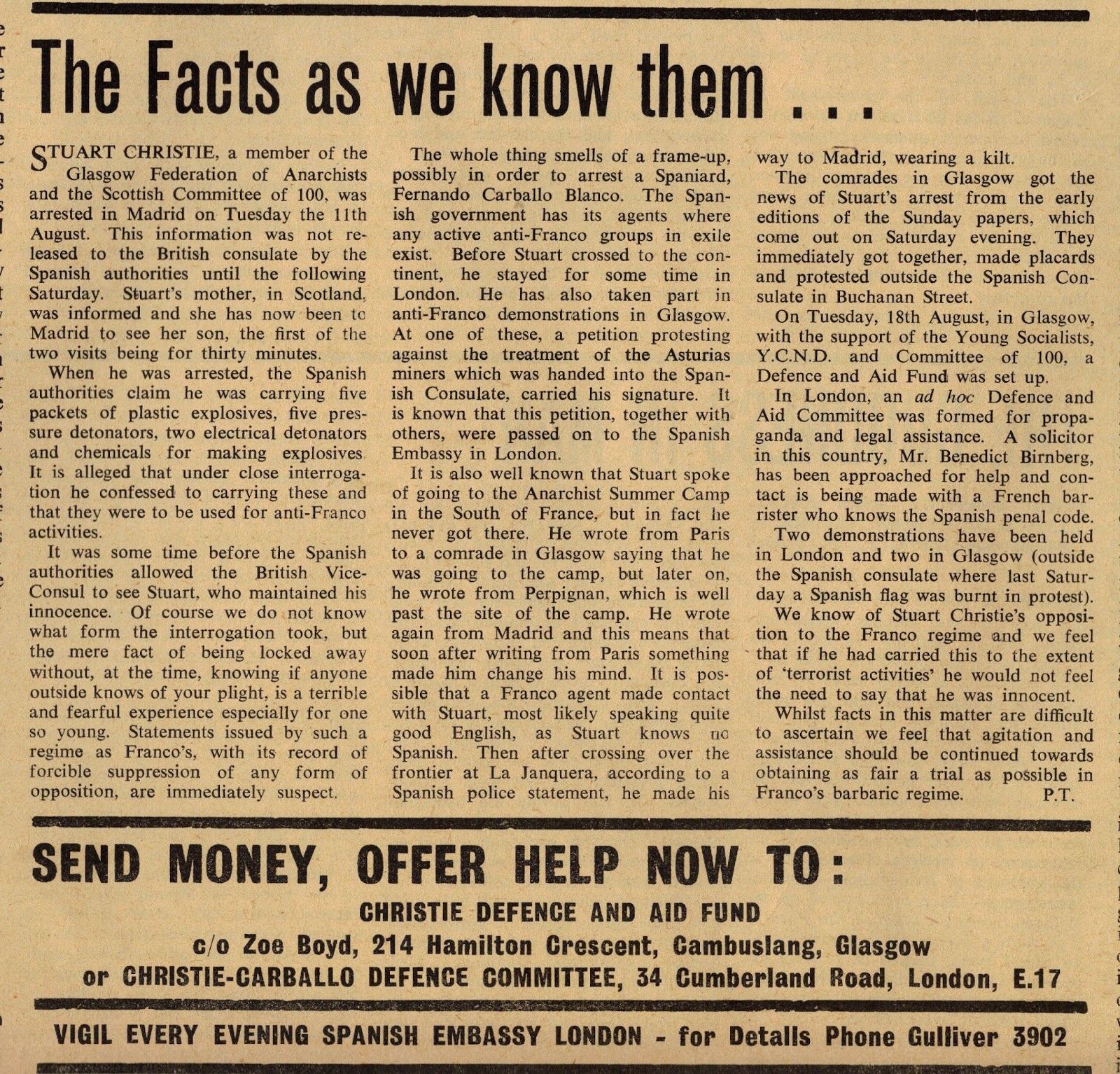 Freedom (Anarchist Weekly) 29-8-1964, p.1
{A professed (/willed) belief in the defendants’ innocence was clearly a matter of life and death at this time.}
This issue of Freedom was almost entirely devoted to the trial and what could be done about it, and the paper continued its support and publicity for Stuart, although a later leading article enjoined 'No More Martyrs'.


The three parts of Stuart Christie's memoir, entitled in this edition 'Scotland', 'Spain', and 'London', originally formed a trilogy comprising My Granny Made Me an Anarchist, General Franco Made Me a Terrorist, and Edward Heath Made Me Angry, published in a rather expensive limited edition between 2002 and 2004. The last two titles are reminders of the occasions when the author achieved notoriety, or celebrity. In 1964 at age 18 he was arrested and sentenced to 20 years' imprisonment, of which he served three, for doing his best to aid and abet, if not personally carry out, the assassination of the dictator Franco, by taking explosives into Spain. A few years later, evidently on more dubious grounds, he was arrested in London and eventually, after a long spell on remand in custody, acquitted of charges arising from the Angry Brigade bombing campaign. This book will not, however, fulfil any hope of gaining an insight into the mind of a terrorist, since although Christie in his youth may have done something to earn the label (and it was inevitably applied to him, often), he explicitly differentiates his position from that of adherents of those like 'say, ETA and Al Qaida today' who 'seek to terrorise the population into changing its ways' (p.123). What it does show is how strongly-held dissident principles can evolve and can then lead to extreme acts.


Two grand-maternal guiding maxims quoted as having helped to land Christie in Carabanchel prison were: 'If you want something doing, do it yourself' (p.120) and 'We are not bystanders to life' (p.122). Of course his particular course of action and choice of affiliation was not an inevitable conclusion from these precepts, nor one likely to have been envisaged or approved by his Granny. Clearly, there was much more to his development, traced here through multifarious contacts and events, with a wealth of cultural and sub-cultural allusion. Readers of a certain age or vintage will find familiar landmarks in his progress through the political landscape of the 1950s and 1960s - Sharpeville, CND,  the Committee of 100, Polaris, the Cuban missile crisis, Spies for Peace, even the words of H-Bomb's Thunder (p. 55). Anti-war activity loomed large; when the 'biggest issue of the day' was fear of nuclear attack (p.57). It had a long tradition; two of the working-class heroes of his childhood, James Maxton (p. 19) and John Maclean (p. 38), were renowned among other things for their opposition to the First World War. For Christie this attitude entailed a wider opposition to the state which he came to perceive as needing war, or at least enemies, and wielding a power which made it impossible to confine protest to single, compartmentalised issues: 'War is the health of the state' ran the slogan (p. 97).


One war was different: the Spanish Civil War, seen as 'the last purely idealistic cause of the twentieth century' (p.39), had a unique resonance for anarchists in its revolutionary phase of collectives and militias. In this cause he felt driven to enlist, impelled both by his 'Presbyterian conscience' (p. 107) and as a committed revolutionary anarchist who sought to 'get the people of Spain to withdraw their coerced consent for the government, and the international community to face up to the moral illegitimacy of the regime' (p.104). This decision and related questions on the nature of political violence, and whether it is ever justified, are analysed at length throughout, in a debate (interspersed with the often entertaining narrative of his experiences) which the author carries on with himself at the same time as with readers or critics, offering no easy answer. Certainly somewhat older and wiser, he approaches his younger self with understanding rather than condescension, condemnation or indulgence, with honesty about mixed motives that included a yen for excitement, and with a readiness to acknowledge flaws in reasoning, as when he admits fudging the issue of possible or likely harm to bystanders if the bomb had gone off. In the final analysis, as set out in the last chapter 'No One's Blood on my Conscience', he considers it fortuitous that his attempt on Franco's life failed, albeit partly for the rather Machiavellian reason that his imprisonment was a more effective way of exposing the nature of the regime.


In the later context of the 'urban guerrilla’ tactics of some alienated dissident factions in western society in the early 1970s, the argument is further pursued. Christie draws distinctions between what he contends is the very limited, selective use of violent means by anarchists, predominantly against property and symbols rather than people, and in order to resist the power of authority, and the habitual indiscriminate violence resorted to not only by such authority but by nationalists and religious zealots and those who erroneously believe that violence is an effective way to change society. While he entertains, briefly, the proposition that 'Perhaps violence is wrong under any circumstances' (p. 267), this is not the implicit conclusion. Readers are left finally to make up their own minds on the point. On the subject of anarchism more generally, some readers may be persuaded to open their minds somewhat, but it would be wrong to make the book sound like a polemical tract. Although the author's views are patently present on just about every page, his story is worth reading for enjoyment and interest. Even the prison episodes are recalled with some humour and a remarkable lack of bitterness, even as not wholly negative experience. Conditions in Spanish gaols were, he attests, more bearable than in Brixton; and gave him the opportunity to work as a medical orderly and dental assistant as well as studying history and politics. His fellow inmates are keenly observed, as are curious circumstances like the 'anthropometry room 'for determining 'criminality' (pp.204-5). He did not exactly mellow while inside but 'became ‘less judgemental of individuals and more committed to oppose a form of society that inclined individuals to commit crimes against each other' (p.202). And insofar as it would not have been produced without those years, this book may be counted as another substantial plus.
Dec. 2004
Posted by SmothPubs at 02:13