From Leyton to Stornoway to Dartmoor... A CO's journey.

The Middlesex Appeal Tribunal records, as noted previously, are a valuable resource for historians interested in the Conscientious Objectors (COs) of the First World War, often providing appellants' accounts of motivation, beliefs and political affinity in their own words. For the most part, however,  such material is not available for other parts of the country, including areas of London which were located in the county of  Essex.

Exceptionally, one CO from what is now the London Borough of Waltham Forest does have an appeal file, because by 1916 he  had moved to the Isle of Lewis. In Scotland, not only were the records for Lothain and Peebles pteserved as the example set (like Middlesex for England), those for Lewis also happened fortuitously to survive.

In 1911, according to the Census, Charles Record at 19 was a 'Servant In Training For Teacher', living with his parents and 18-year-old sister Gladys, an 'Elementary [Primary School] Student Teacher' at 58 Borthwick Road, Stratford. His parents were east-enders, father a 'Decorative Japanner' from Bethnal Green, mother from Stepney. Charles and Gladys were born in Wanstead Slip.

Leyton was a local government district in southwest Essex, England, from 1873 to 1965. It included the neighbourhoods of Leyton, Leytonstone and Cann Hall. It now forms the southernmost part of the London Borough of Waltham Forest [...] To the south, the parish of Wanstead formed a long protrusion known as the Wanstead Slip, which extended to the marshes of the River Lea and divided Leyton from West Ham.

Five years later he was a science teacher in the Nicolson Institute, Stornoway, Isle of Lewis, Scotland, living at 28 Point Street in the town. By then the school was well established and prestigious, producing high-achievers who went on to successful careers in the wider world. In 1914 the school magazine, according to a recent historian, reported that since 1898 nearly 100 (99) former pupils had graduated from Scottish universities. Science, though, was a comparatively recent addition to the curriculum, which may explain why at least one of its teachers came from so far away.


In January 1893, the then headmaster, Mr Forbes, was placed in charge of the new Secondary department which introduced the teaching of Latin, Greek, Mathematics, Geography, History, English, French, German, Music, Domestic Economy, Drawing and Needlework.
In 1907, with a school roll of more than 800, a decision was made to erect a new building. The new building was opened in 1910 - built with the aid of a £7,000 grant from the Scottish Education department - and incorporated five classrooms, a science laboratory, technical workshop and art room.
What Charles did and had done to him in the war has already been looked at in some detail, along with a very few other COs from the island. One of those, Murdo Macleod, had his appeal hearing heard on the same day as Charles, and was later sent to the same regiment (the Seaforth Highlanders) and court-martialled in the same place (Ripon). It would be interesting to know how those two young men, united in their determination but widely divergent in their beliefs and background, got along together in their shared adversity.

Charles Record, Stornoway, originally from Essex, is on the Pearce CO Register

His motivation is said to be 'religious', but his own words in the Appeal Tribunal file make it clear that he also saw himself as an Iinternationalist.

Appeal against Conscription, 1916 by Charles Record, Conscientious Objector
The file is prefaced by a handwritten 2-page dated 20th May 1916 protesting against the decision of the Appeal tribunal. 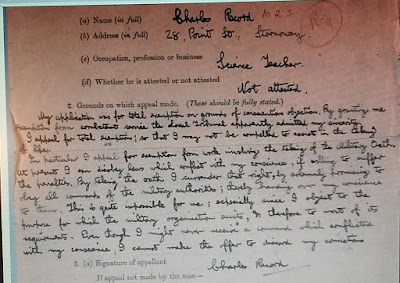 (2) Grounds on which appeal made: My application was for total exemption on grounds of conscientious objection. By granting me exemption from combatant service the Local Tribunal apparently admitted my sincerity.
I appeal for total exemption; so that I may not be compelled to assist in the taking of life.
In particular I appeal for exemption from work involving the taking of the Military Oath. At present I can disobey laws which conflict with my conscience, if willing to suffer the penalties. By taking the oath I surrender that right, by solemnly promising to obey all commands of the military authorities; thereby handing over my conscience to them. This is quite impossible for me; especially since I object to the purpose for which the military organisation exists, & therefore to most of its requirements. Even though I might never receive a command which conflicted with my conscience, I cannot make the offer to discard my convictions.
Charles Record
March 4th 1916
Reasons for the decision of the Local (Stornoway) Tribunal

For Appeal Tribunal (Ross & Cromarty and Sutherland, Lewis Section)
The Tribunal having heard the appellant refused the Appeal.
Leave to appeal [further, to Central Tribunal] was also refused, the appellant not having stated any grounds to justify persuasion.
Stornoway 31st March 1916.

Reasons in support of the [original] Application 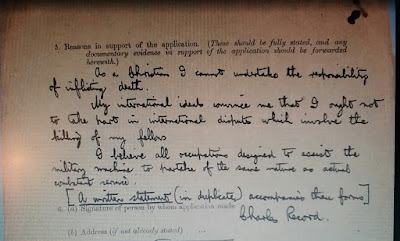 As a Christian I cannot undertake the responsibility of inflicting death.

My international ideals convince me that I ought not to take part in international disputes which involve the killing of my fellows.
I believe all occupations designed to assist the military authorities to partake of the same nature as actual combatant service.
[A written statement (in duplicate) [on file] accompanies the forms].
Charles Record

The penalties Charles duly underwent in accordance with his conscience included some of the most rigorous prisons and Work Centres but unlike some.COs he survived and was evidently able to resume a normal life and exercise his profession. In early 1919 he married Ethel Betts near his old home and birthplace in Lonodn (West Ham registration district).
1939
318 Almondbury Bank , Huddersfield C.B., Yorkshire (West Riding), England
Record Household of 6 people
Charles Physics Teacher, Tech.College  b.30-10-1891

The 1939 Register of Electors finds him living in Huddersfield and employed as a Physics Teacher in the Technical College. Others in the household are his wife Ethel, their daughter Kathleen, born in 1922, his widowed mother Annie and (probably) an unmarried paternal aunt, and someone else whose details are not (yet) available. According to the most likely death record, Crewe 1967, he lived to the age of 75.

Posted by SmothPubs at 15:34 No comments:

A search on the online database of First World War Conscientious Objectors (Pearce CO Register) using keyword 'Walthamstow' brings up 108 records. While not quite all of these include an address in the area - it was a location for enlistment in the RAMC - it is probably safe to say that about 100 men resident in or from present-day E17 (more or less) felt strongly enough about opposing the war to take a stand openly against it, with all the risks to freedom, health, livelihood and sanity that that entailed. (What happened to some of those who enlisted in Walthamstow is another story.)

Although transcripts of all the records are freely available, the amount of information given on each can vary from brief details of name and reported arrest to a thorough if shorthand account including age, address, occupation, motivation, courts martial, prison, work camp, date of discharge and occasionally subsequent career. Sources are supplied in all cases. A selecction has been made here, to give an impression of what may be found, picking out some who stand out in one or more ways as being out of the common even in this uncommon company, For example, we have several sets of brothers; a number who were politically motivated and/or proclaimed themselves without religion, knowing how this would prejudice the tribunals which considered their claims for exemption; and others who were sent to do alternativeservice at notorious work centres like Dyce camp, Dartmoor and Wakefield. These categories may overlap to a considerable extent.

"... approval of the discharge... of the men named... who have been convicted of offences against discipline which they pleaded were committed on the grounds of conscience."

Splett brothers: 'both parents German'. Another with German connections -

Note: Internment - "The British government was initially reluctant to impose widespread internment in the United Kingdom during the First World War, choosing instead to restrict the activities of nationals of enemy nations residing in the UK and interning only those suspected of being a threat to national security. Public anti-German sentiment peaked with the sinking of the RMS Lusitania on 7 May 1915, and the subsequent rioting forced the government to implement a general program of internment."

Note: "The Prisoners (Temporary Discharge for Ill Health) Act, commonly referred to as the Cat and Mouse Act, was an Act of Parliament passed in Britain ... in 1913."

Note: Conscience without relogion was a concept seldom recognsied by the tribunals.

Note: "The Non-Combatant Corps is one of the least-known parts of the Conscientious Objector story... Neither one thing nor the other, NCC men had to define their own labour and resistance according to their own moral compass.
The NCC arose from the Military Service Act which, in [its] provision for Conscientious Objectors to be granted “Exemption from Combatant Service Only”, created a new type of soldier by the thousand - the official non-combatant."

Reginald William Sorenson, 1891-1971. The Pioneers' Hostel, 23, Highbury Place Highbury  NCF (No-Conscription Fellowship); North London Herald League; ILP (Independent Labour Party); Minister of the Free Christian Church, Walthamstow  Labour Parliamentary Candidate, Southampton, 1923,1924, Elected, West Leyton, 1929. Writings in Liddle Sorenson CO/089 Typescript recollections; CO supporter and anti-war campaigner with NLHL. No evidence of his being called up and becoming a CO. Post-war: Labour MP West Leyton 1921-31, 1935-50, Leyton 1950-64; created life peer 1964.
(The database includes supporters of COs as well as those granted or claiming that status.)
"Reginald Sorenson was not a Conscientious Objector, as his work as a Minister of the Free Christian Church in Walthamstow granted him Absolute Exemption under the Military Service Act. Even though he was exempt, he still felt that Conscription was an injustice. Reginald became an active supporter and campaigner on behalf of Conscientious Objectors as part of the North London Herald League and the Independent Labour Party. As a prominent local pacifist who supported the work of the No-Conscription Fellowship he was often invited to speak at the Herald League's Anti-War meetings. After 1918 he would carry on his pacifism, working as both a peace campaigner and as an MP for seven full terms."

Note: For the North London Herald League and more opposition to the war, see 'Don't Be a Soldier' by Ken Weller (available online). Don't be a Soldier! The Radical Anti-war Movement in North London, 1914-18, Journeyman Press/London History Workshop Centre, 1985.

Sent to Dyce Camp (as well as others listed above) -

The house where Pfeil lived already has a blue plaque,
of Walthamstow's speciality 'ordinary people' type,
on window first-floor right in pictures

Note: Unlike Claybury, several asylums did accept COs on WNI; others had COs as patients.

Note: Questions were asked in Parliament about the apparently punitive use of 'alternative work' schemes, with professionally qualified COs often being assigned to manual labour.
Another optician, from Ealing, was assigned to the NCC (see above) and set to loading ammunition before being sent to a work camp. His protests about this, in his own words, can be read in the records of the Middlesex Appeals Tribunal. Unfortunately for researchers, the County Appeal Tribunal for Walthamstow seems to have been Essex, so that the files were destroyed (like almost all others apart from Middlesex and some in Scotland).

And finally, a short military career -