From a first-year student writing home to a small town in the Highlands:-
[omitting personal names]

Thanks for the letter & parcel. I’m replying at once so that you can send the enclosed form back to me completed as soon as possible – I matriculate on Thursday so I couldn’t send it off until then anyway, but there’s no sense in having unnecessary delays. I’ll probably start getting a guilt-complex about all this affluence, & give away vast sums to charity or something (this is where you point out that charity begins at home). As you say, I have no money worries.1 There has been no trouble about withdrawing money from the P.O. and anyway, as I omitted to inform you, most of my wealth is in an account I opened with the Clydesdale & North of Scotland Bank just after I got my grant, which was paid by crossed money-order. I can’t make cheque payments, but I can withdraw any amount without notice, paying 2½D if it’s over £2. Bursaries, by the way, are paid half at a time, and in cash – it was super walking about for a little while with 8 fivers in my note-case.
I’m not sure if I’ll be going tot the Autumn Ball – probably not, actually, unless my Fairy Godmother is working overtime, the big snag being a Partner. If not, I’ll probably go to the Marxist Society Hop in the Union instead (you don’t have to be a member, they just want money) and then sit up all night writing a History essay, or something. The silver 2-piece2 will probably come in handy anyway, for instance there’s a French Club party on Saturday.
To reassure you in case you think I’m neglecting the work bit: I got reasonable marks in my first French & German3 proses, and improved them in my second in both subjects; also we had a History essay exam in which I got 60% (not at all bad for a first time, they tell me) and was best in my tutorial group. My effort was described as “a good clear discussion of the document” and as I had been even more than usually pessimistic about the thing, I was very pleased. It’s funny how my whole attitude to my essays changes when I get them back with favourable comments. I nearly wrote to [the history teacher at school] to boast about it!

Tell [younger sister] to keep up the good work in tests etc., also not to turn aside to Geography or anything unspeakably ‘orrible like that.4 Thinking back to me on 2A, it’s extraordinary to hear of [the geography teacher] enquiring about me – just shows you (something or other), n’est-ce pas? And ask her what about the epistles she was threatening to write, unless one is in the post already. Has she had her hair cut?!
Delighted to hear about new little cousins. I’ll get something for [one of them] in the next day or two & send it with a card. How is wee [youngest sister] getting on these days? – {School friend] told me about her gloating over the election results, heh-heh.5
I must close now in order to get some sleep.
[Signed off]

P.S. The propagandists told all about it on Societies Morning. “You want to join the Historical Society?” they said. “A good move. The Prof gets a list of all new members and gives them 60 in their first essay”! 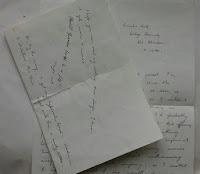 By the way, I got my typewriter6 back – broken in 2 directions this time. Must write them a nasty letter..

1. The writer had been awarded the maximum grant from the Scottish Education Department and had also won an Entrance Bursary from the University. Her "affluence" was relative.

2. The two-piece was home-made, of 'Lurex' material.

3. At Aberdeen the Honours MA had to include two 'outside' subjects in the first year as well as the main one (or one outside subject for Joint Honours).

4. Pupils in the academic stream going on to study for Highers (Scottish Higher Leaving Certificate) had to narrow their choice of subjects at the end of second year in the secondary school, as in Science or Languages, History or Geography. The writer was a partisan of history (and languages).

5. The Labour Party under Harold Wilson narrowly won the general election of October 1964.

6. The typewriter was a toy one.

Posted by SmothPubs at 03:09 No comments: