As a 24-year-old single man, Hector Welsman Smaldon of 37 Elers Road, West Ealing, became liable for military service in early 1916. He applied for absolute exemption in February, stating his reasons:
I have a distinct objection to Combatant military service, indeed to every form of military service, consequent upon holding certain views in relation to Christianity [... Biblical quotation, “My Kingdom is not of this world...”] This scripture shows clearly that, as a servant of Christ and a follower of Him, I cannot undertake Combatant service. Nor, as  belonging to the Kingdom of God, could I take up any service in support of a system, in which Violence, and the taking of human life, have place, without contravening my principles. (16th Feb. 1916)
When he failed to convince the Ealing Local Tribunal, he took his case to the Middlesex Appeal Tribunal (Case Number: M5513), restating his position:
As a Christian I have great objection to Combatant Military Service as contrary to the Spirit & teaching of Christ. I consider that to serve in the Army in any capacity would be a surrender  of Christian principles. (March 8. 1916)
The Local Tribunal explained its decision:
The appellant stated that he belonged to the Plymouth Brethren: that he could not undertake military service, either combatant or non combatant, for that would sacrifice his christian principles: that he felt it his duty to do all the good he could, but not as a part of any military system.
The Tribunal did not consider that there were any difficulties of conscience, particularly as two other members of the same religious body had expressed their willingness to undertake non combatant service, and the application was therefore refused.
The Military Representative made no observation on this case.
!3/3/16
By the time the Appeal Tribunal recorded its decision, after an adjournment of the hearing, Hector’s situation had changed.
Decision [1st May 1916].
Temporary exemption 6 mos. from today conditional upon his remaining in the position as an attendant at the City of London Lunatic Asylum, or in a similar position elsewhere.

The exemption was granted on the ground that “a conscientious objection to military service has been established”. His normal employment had been as a Traveller for a firm – the firm* – of Ostrich Feather Manufacturers, Botibol & Co., but he had been referred to the Committee on Work of National Importance which wrote to the Appeal Tribunal on 12th April stating they had been informed that the Medical Superintendent of the City of London Asylum located in Dartford, Kent, had “employment suitable for Mr. Smaldon” and that it was desirable he should take up his duties on the 17th. The arrangement evidently suited him; he asked for it to be made permanent rather than temporary. Instead he had to go through the process of applying for repeated extensions of his exemption throughout the war, resulting in a massive 80-page compilation of filed paperwork. 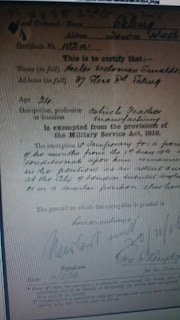 He was not usually required to attend the hearings, however. The Medical Superintendent testified to the quality of his work, and didn’t want to let him go A couple of attempts by the local Military Representative to have his exemption withdrawn got nowhere. He stayed in post at least until the end of the war, possibly longer – it was in Dartford that he married, in 1921.

Hector Smaldon was far from being the only CO directed to work in a “lunatic asylum” (there were upwards of 60 as recorded on the Pearce database) but must have been one of the first, and possibly least reluctant. Among his co-workers in 1916-19 were about a dozen overall, for varying lengths of time; Richard Thomas Shirley of Westminster found the work didn't suit him, while Robert William Miller of Islington complained that the strain 'of 14 hour days with lunatics' was making him ill. About 30 COs appear to have been recorded as ‘certified insane’ during the war, but there are few if any matches between the asylums to which they were committed (including Hanwell in at least 4 cases) and those to which their (to some extent) co-thinkers had been sent to do their 'work of national importance'.

Hector’s older brother William James was also a CO, whose objection was recognised by the Ealing Tribunal to the extent of granting him Exemption from Combatant Service only. Apparently without lodging an appeal, he was drafted into the Non-Combatant Corps, and within a few months was in France. He survived to be demobbed after the war, late in 1919.


The 1911 Census shows the Smaldon household: Hector Welsman (mistranscribed as Welsham on ‘Find my Past’) aged 19, a Clerk in a Drapery Warehouse, living at 37 Elers Road with his widowed mother, and 26-year-old brother William James, a Tramway Motor Man. Both brothers had been born in Hull. There were three boarders, William and Harold Lucas, probably father and son, and Harold Davies whose brother (probably) was also present on census night, visiting from Taunton. In 1901 Hector's and William's father, a ship's watchman, was still alive, and the family were living in Kingston upon Hull.
Hector eventually returned to his county of birth, Yorkshire, where he died in 1987.