14th (Nov. [1942], continued)           Parade with full kit at 0945 hours. We then march to Retreat Station and thence to Capetown docks by special train. There we board an antiquated looking ship of some 7000 tons called the Oscanius [Ascanius]. On going below we find that the accommodation is very bad. We are a little consoled, however, by the fact that we only have to stick it for five days. That’s the time it is going to take this hooker to get to Durban. Actually it takes three days.
On her last trip this ship had to make a run for it at full speed, to escape a U-boat, and damaged one of her engines. At 1015 we have set sail with remarkably little fuss and we are soon out of the harbour. I feel sad to be leaving Capetown and its many happy memories behind. Since we have no escort and speed is considerably reduced, we are hugging the coast. 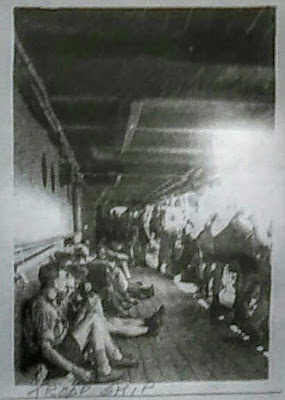 16th      We have drawn level with the Cape, and a destroyer has joined us. We are now heading out towards open sea. Already a huge queue has gathered for the canteen. As we round the Cape, Table Mountain and the Lion’s Head are again visible, this time from a different angle. We have now joined a convoy of 13 ships. They all appear to be cargo ships, showing the usual patchy colouring of the tramp. The nearest ship on our starboard side, which is about the same size as ours, is carrying four railway engines on her deck. For escort we have two destroyers and a Lockheed Hudson, which puts in intermittent appearance. Off to our starboard side (I imagine in case our engine breaks down) is a tug. The weather makes for pleasant sailing and, apart from the discomfort which troops must endure on a troopship, everything in the garden is lovely. All day we sail peacefully further and further into the Indian Ocean, all the time keeping well in to land. As night falls and land becomes less and less visible, the majority of the troops seek the dubious comfort of their hammocks. During the night a ship passed with all her lights ablaze, signifying that she was either neutral or a hospital ship. 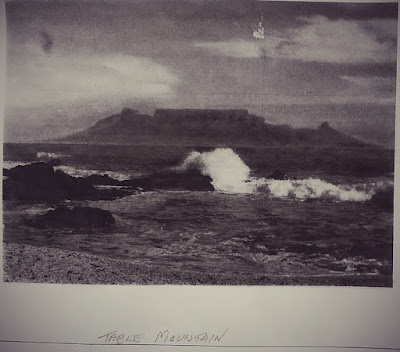 17th      Today the weather is much more stormy, and the ship is tossing about like a mad thing. Those who are not sea sick direct a hear-rending appeal to the Chief Engineer to keep the ship still. The canteen, to my surprise, is quite good, and in addition to those things which were available on the Andes they also sell tea. It’s amazing how a cup of tea helps to keep up the morale of the troops. They will put up with all sorts of discomfort if they can have a cup of tea and a cigarette.
[Probably still 17th although "18th" here in typescript] At 0900 passed a lonely lighthouse. To the crew that means that beyond that point of land on the shores of the bay is Port Elizabeth. It is a big naval base. Here we slowed down, and the tug drew closer, so that for a minute I thought we were going to put in there. The thought was soon dispelled when in a few minutes we picked up speed again and joined on to the port flank of the convoy. All the while the tug is having a rough time of it... She takes on board a lot of sea…
It is possible at times to see objects on the skyline. It may be houses or trees but the general opinion is that it is Zulu or tribal villages. The countryside, as far as is visible from the sea, is very desolate. It is now evening, the sun has gone down and it is quite chilly. We’re still sailing north… So to bed to be rocked to sleep in a swinging hammock while the lads sing softly as is their wont, when time hangs heavily. It’s funny how songs bring back memories or the atmosphere of the past It is very pleasant to drift off to sleep with these memories.


18th      [Second entry with "18th" in typescript; this one seems to be a new day.]
About 0730 we have reached East London. We’re still ploughing into quite a heavy swell and the tug is still having a hard time of it. The wind decreases a bit towards evening. All afternoon there were signs of habitation along the coast, sometimes scattered houses and now and then a small township.

19th      0600 hours. We’re in sight of Durban. This, unlike Capetown, is built on a fairly low stretch of land, sloping gently to the sea. It seems to stretch for miles but here the buildings are modern and high rise. The pilot boat comes alongside and we head slowly for the dock, hitherto hidden by a headland. As we passed through the narrow entrance to the dock, l was surprised to see such a number of large ships and about a dozen warships. On landing we were taken to a tented camp on Clairwood race course, about 7 miles from Durban. Bags of sand and ants! Went to Durban about 1700 but didn’t get a very favourable impression. The city was deserted.


20th      Went to the city again at about 1400 h. In the daytime it looked much more inviting. It is a more modern city than Capetown but the people are not so hospitable. We went to the open air baths at Marine Parade, then came back in to town and had tea at the YMCA.

21st      Went to the baths again and progressed a bit with the swimming. In the morning went to the baths again and managed a few more strokes before sinking. In the afternoon we went to see the Zulu dancing. “Shorty” took some photographs of it. Then we went to the snake park where we saw all kinds of snakes including pythons and cobras. I was surprised to learn that snakes can swim. In the evening we went to a concert at the Durban Jewish Club. A nice place and the concert was very good.

23rd – 25th At the baths. I can swim quite well now. The evenings were filled in by a picture show or a concert. There was a very good one by the Durban Municipal Orchestra. Very heavy rain in the morning, and everything is wet and soggy, including the blankets. In the afternoon we went to Sons of England Canteen then to the museum. In the evening we went to a City Hall concert.

29th      I was detailed to go with Jim Lowe and two w/ops (wireless operators) also another sgt. and f/sgt (sergeant and flight sergeant) to the RAF camp at Congella.