Another CO from Bedford Park: Imprisoned in two world wars

From the Pearce Register:

The above records appear separately on the online database of First World War Conscientious Objectors (COs) but can be taken to refer to the same person, supplementing each other's information as given in the Middlesex Appeal Tribunal file and Central Tribunal Minutes respectively. The different addresses cease to be a problem in view of the 1911 Census, which shows William Burgess Haines as an East-Ender, living with his parents, siblings and others in Leytonstone (often parental-home addresses are supplied for COs, rather than the latest residence at call-up). 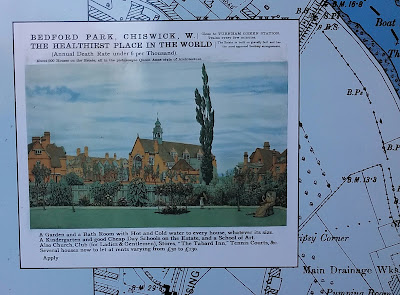 Appeal (Dismissed 28-3-16)
Haines lodged an appeal on 28th February 1916 against the Local Tribunal (LT) decision not to grant him exemption (Middlesex Appeal Case Number: M213. William Burgess Haines of 9 Addison Road, Bedford Park, Catalogue reference: MH 47/9/29). Abandoning the grounds of his occupation being important to the nation, he stood as a CO:
... on the single count of my deep conscientious conviction, entertained for years, that as a follower of the teachings of Jesus Christ I cannot take part in any military operations. This is purely an individual position, &I cannot accept the jurisdiction of the Tribunal with regard to it, - though I accept the consequences of their decision (i.e. in any punishment that might follow). This I think should be a sufficient evidence of my sincerity. In short, I ask for exemption, & quietly state that if it cannot be granted I would rather accept the alternative of punishment than service.


The LT based its decision on the unusual argument that his work had included paid research for the Admiralty which intended "to use the invention against the enemy", which would seem to be actually playing up his work's importance and using this to undermine his credibility as a CO.

His original claim (17-2-16) was on dual grounds: "For TOTAL EXEMPTION as CONSCIENTIOUS OBJECTOR DOING WORK OF NATIONAL IMPORTANCE." On the form, neatly typed, he gave his occupation as "Scientific Research (Physics) working as Beit Research Fellow  of the Imperial College of Science & Technology, Kensington." He stated " My main reason is that, as a Christian, I cannot take part in any military operations" before going on to explain the importance of his work.
The claim was supported in a letter dated Feb. 15th by Professor R J Strutt (pp.6-7), who described Haines as being one of "that comparatively small number of persons who can plan and carry out scientific investigations, and whose services the country cannot afford to do without."
The LT Notes on the case add little. "With regard to his conscientious objection, the only statement he could make was that he believed in the Sermon on the Mount, and as far as he understood it, he was not able to take part in the War."

The Military Representative brought out the matter of being useful for the Admiralty, Haines acknowledging that results of the work - electrical and "nearly always theoretical" - "might have good or evil uses". This is summed up in a careless final sentence (p.9, right).


The "W B Haines" record shows some of what happened after the appeal was rejected and he was "deemed to be enlisted":
It is not clear how long it was before he could resume his scientific career, although it was back on track by 1921 and when he did so his claim about its importance was justified by results. When he died in 1963 he rated an obituary in the leading science journal, Nature.
DR. WILLIAM BURGESS HAINES, who died suddenly last March, joined the Soil Physics Department, Rothamsted Experimental Station*, as one of its earliest members, in 1921. He was the first to show, by simple, but elegant, experiments that the moisture content in porous bodies like soil displays hysteresis... #This work… led to a clear understanding of water distribution and movement in soil, as affected by weather, cultivations, and vegetation. Nature 198, 434
*Rothamsted Research, previously known as the Rothamsted Experimental Station and then the Institute of Arable Crops Research, is one of the oldest agricultural research institutions in the world, having been founded in 1843.
#Hysteresis is the dependence of the state of a system on its history. For example, a magnet may have more than one possible magnetic moment in a given magnetic field, depending on how the field changed in the past.
Hysteresis: the phenomenon in which the value of a physical property lags behind changes in the effect causing it, as for instance when magnetic induction lags behind the magnetizing force. 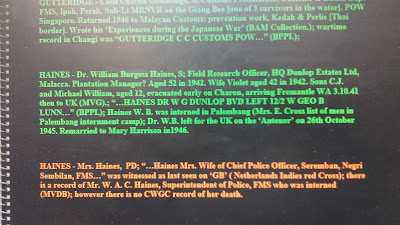 The Nature obituary is reticent about Haines experiences in the Second World War - when the question of being a CO did not arise for him - as well as silent about the First. It is not perfectly accurate in stating that he was in a Japanese prisoner-of-war camp throughout the Second. He was indeed interned, but only after another ordeal, having been a passenger on the HMS Giang Bee, which was sunk by a Japanese destroyer on 13th February 1942. There were 300 or more on board, mostly refugees escaping from Singapore towards Batavia; 104 people were listed as survivors in 1943 by the Netherlands-Indies Red Cross from information supplied by witnesses at Palembang internment camp. Almost all survivors had ended up in this "migratory" camp. Haines was among the minority who survived once again; the camp had a death rate of 55% for men.