Agatha and the Asylum: a fragment


Acknowledgement: This connection was drawn out by Dr Jonathan Oates in a Local History talk in Ealing Central Library a few years ago, about Agatha Christie and Ealing, where she spent quite a lot of time during her early years, in the home of a great-aunt.

Agatha Christie's The Big Four (1927) is, to put it mildly, not one of her best books. Not so much a crime novel as a portmanteau of preposterous plots tenuously linked in the rather leisurely attempts of Poirot and Hastings to combat a more than usually unbelievable world-domination mini-conspiracy. (Mind you, some aspects are less implausible than others, such as the arch-villains' motivation, "lust for power and personal supremacy" and the backing of "unlimited money".)

Published in the aftermath of its author's disappearance trauma and sensation, it may have been written partly as therapy, to get back on track, or under pressure from publishers to produce something before the publicity subsided, or to use up every idea she'd ever had (or borrowed) and see what she could get away with (while incidentally releasing some of her more cynical and exasperated feelings about her most famous character) - or perhaps a combination of such things might explain it.

In Chapter 2, 'The Man from the Asylum', it looks as though part of the plot may be the one about the good guy falsely certified insane. (This - spoiler alert - turns out not to be the case; the inference that it could happen in the real institution named might have led to some bother):


'A big burly man in uniform' turns up claiming to be "From 'Anwell - from the 'Sylum"  (thus establishing  his lower-class, uneducated and 'uncouth' persona) and to be seeking an escaped inmate who has been confined for two years: "'Armless enough", not homicidal, but suffering from "persecution mania". Of course "They all say they're sane", the keeper observes "callously".

It later transpires that the presentation of this character conforms exactly to Captain Hastings' mental picture of "what an asylum attendant should look like"; since his own personality is established as ultra-conventional and accepting of prevalent stereotypes, this may not be the view of his creator, but she says nothing to counteract it. The experience of no doubt having had anxieties about and aspersions recently cast on her own mental state could well have fostered lurking fears of incarceration. (From memory, Why Didn't They Ask Evans? - 1934 - also contains a plot-strand about confinement on supposedly spurious mental-health grounds, in a private nursing home, but that's another and rather better story.) 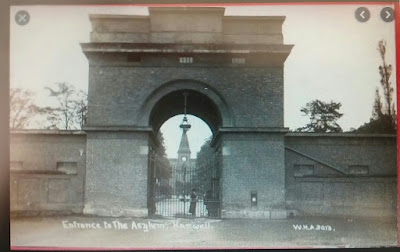 "Hanwell Asylum" - in the 1920s it was the London County Mental Hospital - in spite of its association with reforms in the treatment of mental patients, may have been an object of some awe, pity and terror for local residents, as such places tend to be. Anecdotally, its later incarnation "St. Bernard's" was something of a hissing and a byword among 1980s Hanwell schoolchildren, to the extent that the sight of a "St. Bernard" label on clothing from Northern Ireland was an occasion for taunts and embarrassment.