An Island Community and a World at War


Around the Peat-Fire, by Calum Smith (Edinburgh, Birlinn, 2001; "Anthology" Edition [with additional essays] 2010), is a memoir which crosses boundaries between personal, local and national history, illuminating all three. First published when its author was nearly 90, it is the story of and stories from the first three decades of his life, almost all of which he spent on the Isle of Lewis in the Outer Hebrides.
Obviously it was not only in the Western Isles that the early twentieth century brought massive changes in the way of life, but there were specific local features: transition in Calum's case linguistically and culturally as well as physically and geographically, from a Gaelic-speaking home and early environment in the west of the island, to the English-medium education system and the predominantly English-speaking town of Stornoway, and other zones of interaction with the wider world. Constrained by pressure on the land and the complications of tenure and inheritance, the crofting family moved to the outskirts of Stornoway, and eventually into it. He conveys the reality of rural poverty, along with the mitigating circumstances that made it bearable, such as the freedom of the open air, the network of mutual support, and the informal entertainments. For some education was the route to a different life, but after a spell at Glasgow University Calum, having turned down a chance to be a Labour candidate, returned to Lewis and spent some time doing odd jobs while 'unemployed' like so many of his contemporaries and fellow islanders - the depression hit hard, exacerbated by the post-war decline of the formerly flourishing herring fishing industry - ending up in the late 1930s as an employee of the local Labour Exchange, the 'Burroo' (Bureau of Employment).
He does not speak for others, but having good verbal recall enables the reader to 'hear' them speaking for themselves in quotations, often at some length, almost as if taking their turn to hold the floor or ‘yarn’ at a ceilidh. There are some areas of reticence: we do not have explicit pronouncements on issues like gender relations, for example, but have the means through his observation to draw certain inferences, one being the clear demarcation of tasks combined with shared responsibilities within a strongly patriarchal society that was nevertheless more nuanced in this respect than might be assumed. It was part of the writer's aim to celebrate and commemorate the people and places he had known (including some who did not survive very long to record their own testimony – several allusions to young men are tagged with a note of how they died in the Second World War), during that past time which he was conscious, as he wrote, of being one of the few to remember.
That he succeeded well is perhaps best illustrated by the book’s favourable reception, not just in terms of sales and reviews, but through the many appreciative letters he received from readers - Lewis men and women, their descendants, and people from other parts of the world in whom it had aroused often emotional reactions and recollections. More formal recognition was forthcoming too, especially in the glowing short review in the West Highland Free Press (28 December 2001) by Roger Hutchinson, who later paid it the tribute of referring to it repeatedly throughout one of his own books, The Soap Man (Edinburgh, Birlinn, 2003), to illustrate his narrative as a recurring motif, i.e. what was happening to an island family during the period he was describing. One of the things that most impressed Roger Hutchinson about Around the Peat-fire was the third chapter, dealing with the shipwreck of the Iolaire on New Year's Day 1919. 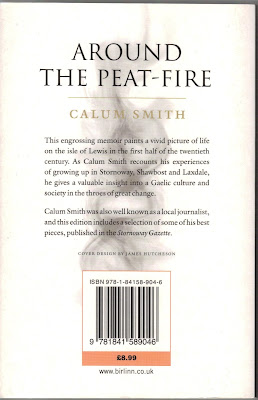 Although this is attractively produced, a number of mostly minor errors escaped the proof-reading process. Since Calum Smith was always insistent on correct usage, they are noted below: