Diamonds among the Silver Darlings

A rare fictional take on the interwar herring industry 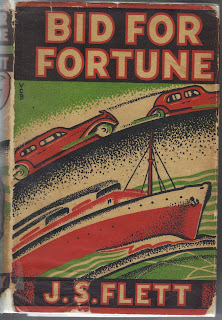 This summer sees the 80th anniversary of the publication of an unusual novel, “Bid for Fortune” by “J.S.” (real name Joseph, no middle name) Flett - not a famous one by any means but worthy of some consideration from several points of view, not least in its historical context…

From The Hub of My Universe by James Shaw Grant. Edinburgh, James Thin, 1982, a book of memoir-essays by the long-term editor of the Stornoway Gazette in its heyday as the paper of record for the Western Isles:-
Chapter 41. They Hid the Diamonds in a Barrel
p.121  When Joe Flett wrote a novel, and I reviewed it for the “Gazette”, I read it in the train between Inverness and Perth. I could not guess even wildly at the date, and I have no recollection of the purpose of my journey. But I recall incidents from the story, although I have completely forgotten many more memorable books I read before and since.
The […] stolen diamonds were smuggled out, concealed in a barrel of salt herring.
When I used to meet [the author], and exchange a passing greeting, on his solitary walks through the Castle Grounds, I had no idea he was gestating a thriller, until the publishers sent me a copy…
The ruse with the diamonds was a natural for Joe Flett. He belonged to one of the leading families in the herring trade.  Flett was a name to conjure with when I was young. But he seemed to have no interest in the family trade - except for literary purposes.


If James Shaw Grant had consulted the Gazette files he would have found the date of his 900-word review “A Well-Received First Novel by J. S. Flett” which appeared in the Stornoway Gazette, 15-6-1934, p.4, col.5 (unsigned but obviously by the Editor). His overall assessment was highly favourable, beginning:
“Bid for Fortune” is described by the publishers (The Moray Press) as “a first novel of outstanding merit”, and, although publishers’ “blurbs” are notoriously misleading, the compliment is earned: the novel in many respects stands high in its class, and from the first page to the last it makes interesting reading.
Several paragraphs go into the plot in some detail, from the young men ‘faced with the inevitable post-war problem - “What are we to do?”’ to the main character ‘finally seeking happiness with the lady of his choice in Newfoundland’.


Grant has some minor reservations, considering that the characters’ introspection hindered the plot (“adventure heroes are not expected to think”):


… [A]s the story progresses, the adventures of the young men seem to become of less importance, when compared with their moralising on the situation in which they find themselves…. Indeed, one cannot help feeling that Mr Flett has not chosen the medium most suited to his talent […] when it was within his power to write something better.
Unfortunately there was no follow-up published novel, whether 'serious' and better or not.
‘However,’ the reviewer concluded, ‘it is not difficult to be content with what we have been given.’


Adam’s adventure with the herring trade when he sought to smuggles the diamonds [...] will specially appeal to Stornoway folk, for it is a trade they know.
Taking it all in all, Mr Flett’s first venture as an author has been very successful, and few who read this book will fail to read its successor, which we hope will be written shortly, if it not already “on the stocks”.
Modern readers would doubtless also have reservations, but not necessarily the same ones, and those with an interest in social history might find more to appreciate than fans of adventure yarns. It is hoped that a fuller assessment of the book, with added hindsight, will be published on this blog shortly. 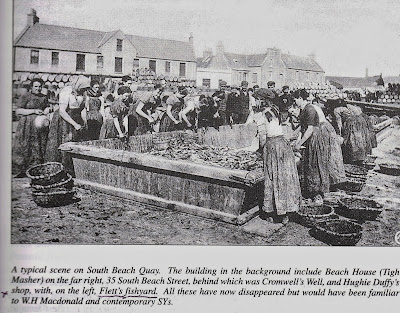 "Flett's fishyard" in Stornoway. The owner would probably have been Joe Flett's uncle, William Downie Flett
(or, earlier, his grandfather James Flett of Findochty, "the Auld Cooper").

Anyone who has seen such a fishyard in operation on a fine day (they do occur in Stornoway) may be tempted to speculate whether Joe Flett may have found the inspiration for the diamonds' hiding place from the sunlight glinting on salt-crystals sparkling in dozens of barrels of herring.