“Over 50 years, the Western powers used the Pacific region as a laboratory for nuclear testing.”


France was not of course the only or the first country to inflict damage on other places and peoples in the course of developing and testing nuclear weapons - and arguably far from the worst, although its resumption of the programme in the 1990s made it for a time the main focus of protests.

"Britain tested nuclear weapons in Oceania between 1952 and 1958. There were 12 atomic tests at the Monte Bello Islands, Maralinga and Emu Field in Australia (1952–57). These were followed by nine hydrogen and atomic bomb tests in 1957–58 at Malden Island and Christmas (Kiritimati) Island in the British Gilbert and Ellice Islands Colony (GEIC)—today the Republic of Kiribati." - Preliminary pages, p.xv in: 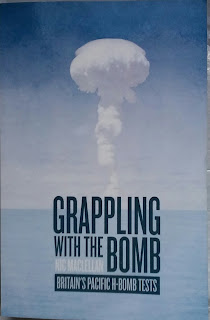 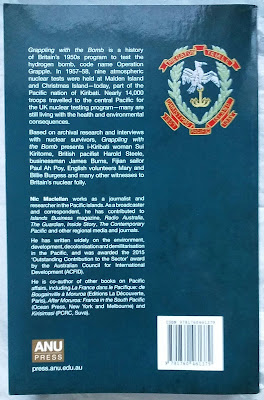 Nic Maclellan, Grappling with the Bomb: Britain’s Pacific H-Bomb Tests. (Pacific Series). Australian Nation University (ANU) Press, 2017. ISBN (print): 9781760461379/ ISBN (online): 9781760461386.
Download free https://press.anu.edu.au/node/2626/download (5.0MB HTML, Mobile 5.8, epub 5.7.)  Buy Print $55 (£41.91 new via Amazon)
An extraordinary and important new book published last year in Australia records, documents and comments on the devastating effects of what Britain did in the late 1950s on and to Malden Island and 'Christmas' (Kiritimati) Island in the Pacific.
The book's structure is original, effective and readable, combining the best features of journalism (its author's profession), history writing and presentation of research findings. As the titles of its chapters indicate, it is first and foremost concerned with people, from the distant decision-makers to the all too close participants in the test, above all the large number who were adversely, often catastrophically affected by them. 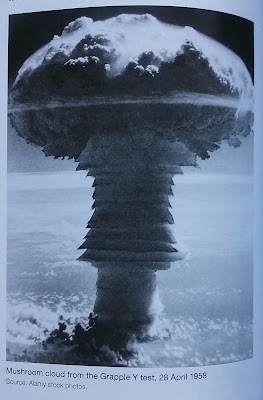 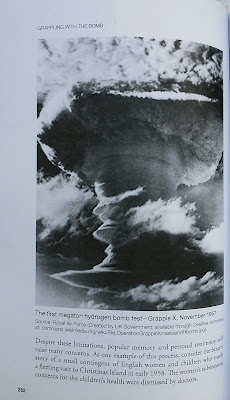 This includes a wide variety of individuals and groups, among them some who tried to stop the tests and many who struggled for some semblance of justice in their aftermath. Here they often speak in their own voices, to an extent unusual in historical or scientific accounts, although not for the first time - interviews by Nic Maclennan with Pacific islanders were published in an earlier book, and much testimony has been recorded in the course of the long battle for 'compensation' to have their sufferings acknowledged. A major factor in hampering their quest, compounding the harm, has been the failure of the authorities to keep records of their exposure to radiation, or to destroy any that existed.
In each chapter, however, there is much more than biographical detail and anecdote. Memory, admittedly fallible, is supplemented by solid contextualisation and correlated with well-documented back-up evidence. For the non-scientist or non-historian, the relevant facts are presented in a straightforward, accessible way. The book begins with a time-line and glossary; 'interludes' expand on the key issues, and the extensive bibliography is helpfully arranged by subject (including American and French atomic tests) and type of material. And there are some striking and terrifying pictures.

A campaigning work, it presents a comprehensive indictment of British government meanness, bad faith and abdication of responsibility for those whose world was taken over and whose lives were irrevocably damaged and shortened for the sake of preparing even more damage and destruction.
As we mark the 60th anniversary of the Grapple tests in 2017–18, the issues of British nuclear weapons, indigenous rights and a nuclear-free and independent Pacific are still with us.


There are debates in the UK parliament about the cost of renewing Trident, the heart of the UK nuclear arsenal. Post-Brexit, Scottish nationalists are calling for a nuclear-free and independent Scotland as they move towards a second referendum on independence. The Republic of the Marshall Islands—unsuccessfully—has taken Britain and other nuclear weapons states to the International Court of Justice (ICJ) over their failure to meet disarmament obligations under the Nuclear Non-Proliferation Treaty. As a consequence, in February 2017 Britain withdraw from the compulsory jurisdiction of the ICJ on matters of nuclear disarmament, in order to halt further cases that threaten its nuclear arsenal.


Eight Pacific island countries co-sponsored the December 2016 UN General Assembly resolution to establish a treaty banning nuclear weapons, with negotiations amongst 130 governments commencing in March 2017. The South Australian Government is seeking to establish a nuclear waste dump on Aboriginal land, even as the Australian Government exports uranium to fuel nuclear reactors like Daichi Fukushima, which since 2011 has continued to contaminate the land and marine environment. Meanwhile the Tokyo Electric Power Company is wondering who will pay the horrendous price tag—US$160 billion and counting—to clean up the world’s latest nuclear sacrifice zone at Fukushima. The list goes on …


Even as some pundits call for an expansion of the nuclear industry to address the challenge of climate change, we have not addressed the costs and consequences of nuclear activities in the 1950s. As we enter a new era of uncertainty, following the Brexit referendum and the election of Donald J. Trump as US President, it is important to remember the tragedy of the nuclear era in the Pacific, so we are never forced to repeat it.


Moreover, it is time for the citizens of the United Kingdom to call on their government to do the right thing and address the legitimate claims of the Grapple survivors.


-   Introduction, p.16
A longer and more academic review of Grappling with the Bomb is available online (June 2018). Journal: Medicine, Conflict and Survival, vol.34, no.2.
Link for e-prints (free for the first 50) here.