II. Some Book-Owners of Biggar

As noted in Part 1, James Robertson Dickson (JRD) brought a number of interesting volumes to the marital home in Elgin. In addition to, probably, some of the items found without designated owners, a number of the names in inscriptions and bookplates can be convincingly attributed to his family and forebears.

The mix is not dissimilar to that found in the Flett family 'library', indicating comparable status, education and aspiration at the time they converged, although JRD's more prosperous ancestors had evidently begun acquiring and preserving their books rather earlier, four or five generations back.

The oldest had been claimed in no uncertain terms by one James Smith, whose relationship to JRD probably came through JRD's maternal grandfather. That there was such a relationship is indicated by the fact of the books being in JRD's possession, and by the repeated mention of Biggar, his birth-place.

(James Smith is a name not easy to trace with absolute certainty but there is a strong possibility that he was JRD's great-great-grandfather.)

i.  The Trial and Triumph of Faith - An Exposition of the History of Christ's Dispossessing of the Daughter of the Woman of Canaan. 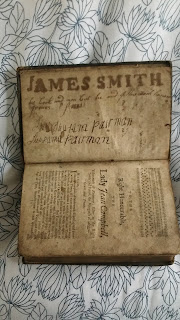 Susanna's childlike writing suggests she was younger than James, and just learning to write - maybe a cousin (relationship not traced) or visitor.
Her comparatively unusual name makes it likely that she was:

Marion Smith could perhaps have been James's mother, or older sister, and have owned the book before he got at it; he comes across as having been younger, as well as more full of himself.

JRD's mother's maiden name was Robertson, and many of the books have this surname written in: 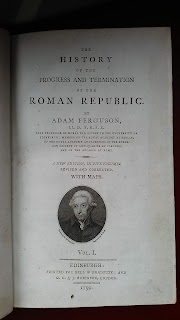 Set: Adam Ferguson, The History of the Progress and Termination of the Roman Republic. Edinburgh, Bell and Bradfute, 1799. Vols 1,2,3,5 of five.
"Robertson" (on most.) First name/initial/s not given

His mother's given names were Marion Brown (after her maternal grandmother). One book which was certainly hers is:

W. C. Webber, Wild Scenes in the Forest and Prairies... Edinburgh and NY, T Nelson 1857.
Plate: "Marion Robertson. Highest Geography Class Map Drawing. Parish School Biggar, August 1858."
At first sight it looked as though she might also have been 'Dux' of the (primary/elementary) school, but that word is pre-printed and partly written over. 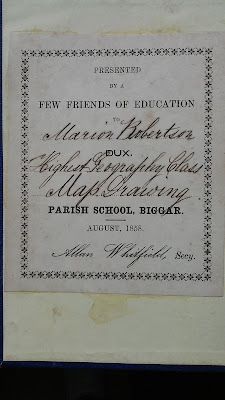 As well as being a notable achievement, her prize is an interesting choice for presentation to an 11-year-old schoolgirl at that time. 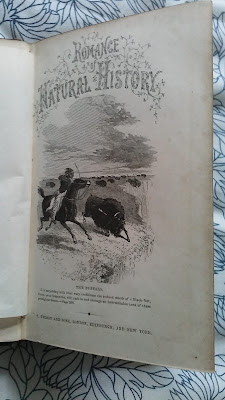 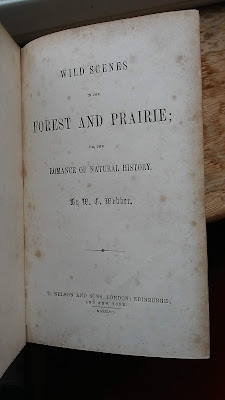 Marion's family background may have helped her to benefit from her schooling.
In 1851 we find her already a "Scholar", aged 4, living with her maternal grandmother (maiden surname Brown), parents, and younger brother.

It is likely that the Smith connection comes via her father James Robertson, born in Biggar 28-2-1810 to parents John Robertson and Margaret Smith, who could be a daughter of James Smith as in the oldest books. There is indeed a Margaret Smith born in Biggar 31-8-1784 to James Smith and Hanna Sibbald - the only one of that name with an OPR (Old Parish Registers - Church of Scotland) birth record during the right sort of time in Biggar.

*The "Librarian..." note under 'Occupation' for her mother is a puzzle. It doesn't seem to be a mistranscription but may have been garbled by the census enumerator. The hint of a bookish connection is intriguing at least; we may even infer some kind of assertion of individuality other than as "wife".

Grandma Marion is still living with the family but evidently independent.

In 1871 Marion and (young) Margaret are living at home with their now widowed father and grandmother, and counted simply as Unmarried. It was in 1873 that Marion married Robert Marshall Dickson.

Robert (RMD)  appears in the preceding censuses with a birthplace in the USA; the transcription notes that he became British by naturalisation. It may not be too far-fetched to speculate that Marion's prize book could have predisposed her in his favour.

Margaret Robertson was living with her sister and brother-in-law in 1881 and 1901; in the latter year
maintaining her individual status as "Living On Own Means".  In 1881 her middle initial is given as 'T', easily confused with 'J' but could stand for Tait. The birth record does not give a middle initial.

So, albeit impressionistically, we can discern a sequence of strong,intelligent,independent-minded women on the maternal side of JRD's family. By all accounts Catherine Flett would not have been out of place in this tradition.

By 1881 RMD has become a "Draper employing 2 boys" and JRD is a Scholar aged 5. The household includes as well as a younger brother, parents and aunt, an 'Annuitant' aged 75 and a 16-year-old general servant.

The surname Dickson itself appears on most of the rest of the books, or can be linked to them:

One where the link was not immediately obvious is: 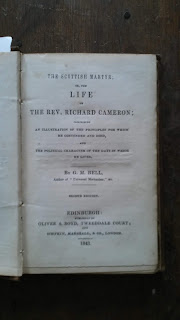 G. M. Bell, Life of Richard Cameron. 1843. Edinburgh, Oliver & Boyd. (Lives of Covenanter Martyrs series)
"The Scottish Martyr, or The Life of The Reverend Richard Cameron, comprising An Illustration of the Principles for which He Contended and Died, and the Political Character of the Days in which He Died” - The National Library of Scotland has another by the same author about a different "martyr", in its Specialist collection, published Glasgow 1837.
"Margaret Elder, 17-9-1851"
This birth record looks right:
ELDER MARGARET m. DICKSON JAMES ALEXANDER 1856 685/7 23 Heriot and Warriston – Possibly she was the second wife of JRD's paternal grandfather James Alexander Dickson. A James A Dickson (b.1811) and his wife Margaret (b.1816) were living in West Linton in 1871 (Census).
A possible scenario might be that Eliza Marshall, RMD's mother, died in the USA, and James Alexander returned to his home area and remarried.

RMD may have crossed the Atlantic likewise on the death of his mother:

She turns up in the 1871 census as Housekeeper to her brother Robert Dickson ("Retired Spirit Dealer"; possibly the Witness at JRD's parents' wedding)  in Edinburgh, and in Valuation Rolls 1885, 1895 as a tenant/occupier in Edinburgh.

a. Herman Melville, Omoo
b. Francis Parkman, The Conspiracy of Pontiac and the Indian War, vol.2
c. W. H. Prescott, The Conquest of Mexico, vol.1
d. W. H. Prescott, History of the Conquest of Peru
e. Henry Hunt Milman, History of the Jews. Vol. 1
Probably owned by the family as a general resource.
---------------------------
William Hazlitt, Characters from Shakespeare's Plays. (1817) The Temple Classics.
Robert 'to Mother. Happy New Year 1-1-06'
From JRD's brother Robert Marshall Dickson (Junior) to his mother Marion.
It may be worth noting the gift was for New Year rather than Christmas, consistent with traditional Scottish Presbyterian reluctance to celebrate the latter.

Not forgetting JRD himself:

Family tradition has it that JRD did become a lawyer but later changed direction to set up as a market gardener ("Fruit grower" on his marriage record).

My Evening Counsellor... For Edification... and Comfort. (Companion volume to the preceding).
"To B. M. D. from R. M. D. 1/12/07"
"To Catherine from R. M. Dickson 6-8-27"
Presented to Kate in the year of her marriage to JRD either by her father-in-law or brother-in-law.
Previously presented to (possibly) JRD's sister-in-law (who may have died in the interim) by the same one or other. This conjecture is suggested by:

Thackeray, Henry Esmond. Illustrated by A. A. Dixon. Collins.

"Bessie M. Nelson 1907"
"George Braid 25-9-09 -/m"
A reasonable hypothesis seems to be that Bessie M Nelson became "B.M.D." as RMD Junior's wife, although the marriage record has not been found.

In the 1811 Census a possible-looking (at first sight, for some reason, but on reflection perhaps not that likely) couple and their baby were visitors in another household:

George Braid, who claimed another of the books as well as the above, is an unidentified connection:
Complete Shakspeare [sic]. The "Victoria" edition. 1897
"George Braid 25/9/09 D/R"
The name is not uncommon but has not so far been found in conjunction with other surnames here.

(Many of the recurrent surnames turn up linked to each other, apart from the most relevant instances noted above, for example:  Margaret Pairman Robertson born in Biggar 1864. Parents Matthew Robertson and Christina Pairman married in Biggar 1859 - no direct relationship to others here found so far. Large extended families were the norm, and marriages of cousins not uncommon).