In a house in Inverness being cleared for sale last year, a collection or rather accumulation of books came to light, which had been given or bequeathed to the late owner by relatives on his father's side of the family. Most dated from the early 20th century or earlier; many were inscribed with the names of previous owners, and some had additional inscriptions or information. Examining the volumes with an eye to family history casts light on the literary interests of the people concerned, and perhaps a little on the intellectual life of the 'middling sort' at that time and place.
In 1891 the family was living at West End N Terrace, Rathven;. In the household were the father Alexander, aged 37, Fishcurer, born in Findochty, Banffshire [Rathven Registration District] (same birthplace for others unless otherwise stated); mother Ann, 36, Fishcurer's Wife; Kate, 14, Fishcurer's Daughter; Alexr, 11, Scholar [i.e. at school], born in Banff; Ann (Annie), 6,  Scholar,  born in Banff;  Barbara, 5, Scholar;  Joseph aged 3,  born in Buckpoul, Banffshire; and Maggie Bella, 1. There were two Servants, Kate Macbain, 35, from Rathven , and Jane Flett, 17, from  Findochty  (Details as in Census.)

Among the many Flett families of Findochty this one had achieved comparative prosperity by the 1890s, owning fishyards as far away as Stornoway. It was mainly Alexander's father James who built up the family fortunes, establishing himself as a well-known figure in the fishing community of the north east, nicknamed 'the Auld Cooper.' This group of siblings were probably the first generation of the family to have the resources and motivation to acquire books - apart from those required for religious observance - in any numbers.

Their interests, if serious, were not narrow. Apart from the religion-related items - not all predictable - we find history, philosophy, Egyptology, criticism and German studies, along with recent and contemporary literature including quite a lot of poetry. Many of the authors are 'big hitters' although there are absences, notably Dickens, and the works here are not always the best known.
The condition of the books generally tends to confirm that they were for use rather than decoration and may well have been passed on among the brothers and sisters. They would not, of course, constitute the entire family library, only those which happened to end up with the siblings' nephew Sandy.
Some are in small format and have leather bindings and gilt edges; many are illustrated with a frontispiece at least. Online research suggests that a few of the titles and/or editions may be comparatively rare. 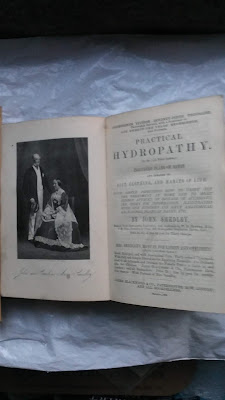 Practical Hydropathy,by John Smedley.
This went into many editions in the late 19th century and may have belonged to Alexander (junior), who became a doctor. 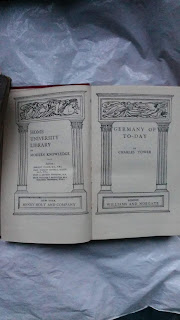 
The Hohenzollerns, by E D James.

Ruskin, Unto this last

Matching volumes by Ruskin, Carlyle, Thackeray, de Quincy, Leigh Hunt and William Cullen.
The last is another medical connection, most likely his 'Lectures on the Materia Medica'.

In 1901  the family was living in Netherton Terrace (Rosebank), Rathven (Registration District), Banffshire. The father was away from home on the census date. Others in the household were mother Ann, aged 46, Fishcurer 's Wife, born in Rathven [Registration District - all others born there too unless otherwise stated]; Alexander, 21, Medical Student, born in Banff; Catherine (Kate), 24, Occupation ‘At Home’; Barbara, 15, Scholar; Joe aged 13 Scholar, Maggiebella, 11, Scholar; Ina (Williamina), 7, Scholar; Walter, 6 Scholar; and a Visitor, Maud Holmes, 15, Scholar, born in England (probably a friend of Barbara); plus Isa Alexander, 31, Servant, born in Cruden, Aberdeenshire.
The books with named owners more or less filled a good-sized wooden crate.

Those with 'Flett' names are listed here; inscriptions are in inverted commas.
Some information about the people mentioned is added where known.

Thomas a Kempis, Of the Imitation of Christ. London, Longman Green, 1891.
"A. Flett"
A./Alex/Alexander could be either the father or older brother.

'A.' could in theory also be the mother or another sister, each named Annie.


Green Pastures: A Monthly Messenger for the Children of God. Vol.8, 1914. Published in Partick and Inverness. (A periodical that ran for several decades).


"With Compliments of the Season from Mr. R. Hutchinson to Mr. A. Flett, Fishcurer, Wick."


'Fishcurer' indicates the father. Wick was one of the places where the family business was carried on in the heyday of the herring industry.  Mr. Hutchinson may well have been a business associate

From the Census, in 1871 Alexander Flett aged 17 was a Cooper (making barrels) living at 20, Rathven with his father James, 53, widower, a Cooper & Fish Curer, and six younger siblings. All the family were said to have been born in Findochty,
The Holy Bible. OUP.
Handwritten comments, refs or quotes on endpapers front and back. Leather bound; small.
"To dearest Kate from Isobel [other word/s erased] Deut.: 33 12.27"
(Deuteronomy ch. 33: "Moses blesses the tribes").
and:
E. McHardie, "Ha Galgal": The Wheel.
[This one does seem to be a rare and peculiar specimen]

Catherine (Kate) was the eldest sister, called after her paternal grandmother.

and
John Ruskin, The Crown of Wild Olive: Four Lectures on Industry and War. (Work. Traffic. War. The future of England). London, George Allen, 1906.
"To Barbara from her brother Alex with love March 14: 07"


Barbara Flett, another sister (called after their maternal grandmother).
At school Barbara won a prize for English, a handsome edition of Pride and Prejudice.
Not with this collection; it was passed down to a niece (rather the worse for wear). 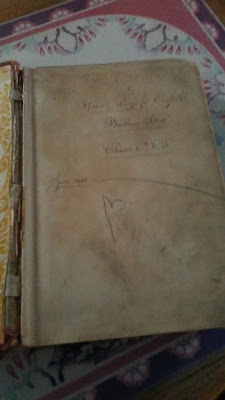 with (in same pencil writing, at the back):
"Joseph Flett. Rosebank.  Findochty. Banffshire.  Scotland."

Joe later wrote a novel in which, among much else, he explores the sort of youthful angst and alienation that may be hinted at in his apparently irreverent attitude to the above work of piety.
Joseph Flett married Elizabeth Hamilton Maclean 18-12-1913, in Blythswood, Glasgow.
Joe’s brother Alexander was a witness at the wedding (along with the bride’s sister Mary Ann).

Bees in Amber: A Little Book of Thoughtful Verse. London, Methuen,1913.
"L. Maclean"
Lizzie Maclean of Stornoway married Joe Flett in 1913 as above.

Mathematical and Physical Tables.
School issue, inkstained, calculations at back.

"A. J. Flett, 70 Nicolson Road, Stornoway, Isle of Lewis."
A survival from 1930s schooldays in the Nicolson Institute, Stornoway.
Alexander John (Sandy) was the son of Joe and Lizzie; the books were found in his house .

and finally, a more recent gift:

In 1927 Kate married James Roberson Dickson of Biggar, who brought his own heritage of family
books, dating in some instances from the 18th century, to their home in Elgin, whence they passed eventually to Inverness along with the Flett set.

(It was Kate who at Christmas 1937 gave The Grand Book for Girls to her 8-year-old niece Irma.)
Part 2 will look at the 'Robertson/Dickson' collection in detail.
POSTSCRIPT
One more name occurred on a book which has already been passed on, title not recorded: 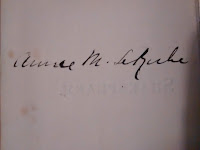 She may have had a Flett connection although this has not been confirmed. The surname occurs on Jersey, where Ina (Williamina) Flett (later Rice) made her home for many years. A possible candidate:
Annie May LeRiche, born 1890, who appears in the censuses of 1891 and 1901 in the Channel Islands.
Posted by SmothPubs at 03:57