In a rare return to exercising her writing talents (apart from letters to family and friends), Peggy (Flett) Smith once penned a short account of how she had perceived Stornoway as a child. 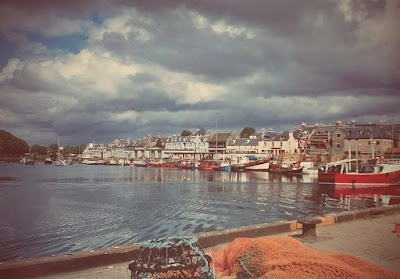 Other Times, Other Places
Recollections of Life in Stornoway iin the 1920s

My earliest memories of Stornoway are seen, not through a glass darkly, but through rose-tinted spectacles.The herring fleet had not yet declined, the summers were always sunny, and for the duration of the Minch fishing which was primarily the months of June July and August the town was a lively bustling place to live. Far out to sea the smell of kippering was borne on the winds - a sure sign to the exiles returning home from the city tenements for their annual holiday that they were nearing their longed-for ancestral homes.


The town was quiet at night through the week when the boats were at sea but morning brought their return, success or failure indicated by the number of screeching herring gulls in attendance and then the scene rapidly changed. Sample baskets of fish were swung ashore and taken to the Fish Mart where the buyers with much deliberation and solemnity made their bids. Then the waiting carters came into their own, transporting each ship's catch to the curers' yards. These yards or "stations" were leased by a host of curers - Woodgers, Stephens, Fletts and McConnochies, alien names at one time but now [in the 1920s] as familiar as the local Macivers, Mackenzies and Macleods.

1917  75,000 barrels of cured herring lying on the piers at Stornoway with the Government refusing to issue a permit for their export. They were eventually exported to Russia but were landed at the same time as the Revolution and were never paid for.

1927 Stornoway's greatest year as a herring port. Estimated 30 million herring taken from Loch Erisort alone in a 6-week period.
------------------------
"By 1876, the demand for fishing stations in Stornoway harbour was so great that they were let out to the highest bidders... Before long, the town was recognised as the major herring port of Britain – if not of Europe."
- http://stornowayhistoricalsociety.org.uk/herringindustry/