A Stornoway Girl in New York, 100 Years Ago 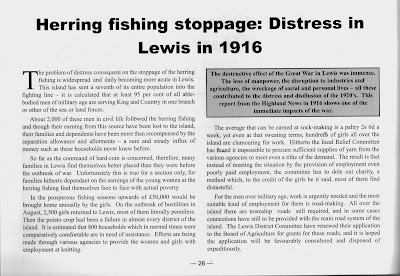 The writer of the letter transcribed below, aged 22 at the time of writing, was the daughter of a Stornoway shopkeeper. After some time as a student at the prestigious Atholl Crescent College of Domestic Science in Edinburgh, in 1913 she married Joe Flett from Findochty, whose family's fish-curing business took him to Canada in August 1915. This was before the introduction of conscription, but his involvement in work of national importance (food supply) might have rendered him exempt in any case.

Outward Bound passenger records show Mrs. Flett, H'Wife, sailed 23/04/1916 on the Tuscania from Liverpool to New York, not shown to be accompanied by husband or child: Country of last permanent residence “Br. Protectorates” [maybe they didn’t know where the (old) Hebrides were?!]; intended future permanent residence USA.
[Some of this doesn't quite fit, but perhaps her seasickness prevented her details being recorded properly if this was done after embarkation, and explains her child not being close by - see letter.]

In fact Mrs. Flett (Lizzie) had her 15-month-old daughter with her and they were going to join Joe in Canada. He met them off the boat in New York and they spent the next 4 days in the city. 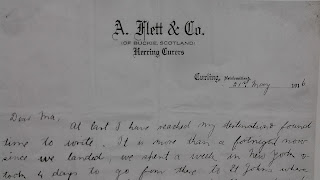 Dear Ma,
At last I have reached my destination & found time to write. It is more than a fortnight now since we landed; we spent a week in New York & took 4 days to go from there to St Johns where we stayed another few days & finally reached here last Wednesday.
Marjorie is none the worse of all this moving about & is as fat & rosy as ever. The people in New York used to stand & gaze at her rosy cheeks, the children are all very pale & pasty there. She was not a bit sick on the "Tuscania" but I was bad the first two days. I don't know what would have become of Marjorie those days, but fortunately I fell in with an Irish girl who took a great fancy to her & looked after her all the time. She was going out to Bermuda as housekeeper to a naval doctor; she was one of the most decent creatures I have ever met. She thought that babies should get a bit of everything that was going & when I came up on the 3rd day I found Margie having a high old time with peppermints & ginger cake. She even used to get her share of biscuits & cheese at lunch.
It is a wonder to me she wasn't half dead, but she fairly enjoyed the trip & was the pet of the whole ship - "Red coat" was all the rage. You would have laughed to see her trotting down the deck in a breeze with the deep sea rowl & her head down in the approved style. Joe met us at New York & fortunately she went to him at once - I was quite thankful. He was wild because I did not travel first class & understood all the time that Mary was coming with me. We had a most glorious time in New York, it beats London & Paris to sticks - better shops, better theatres, better restaurants & better fashions & far nicer things to eat. I was just enchanted with the famous Broadway & 5th Avenue. We went about all the time with Mr & Mrs Vidvotsky wealthy Russians in the herring trade. They were awfully nice to us - their servant took Margie out in the afternoons & stayed with her at nights. We bought a nice small American pram which was most useful - you should have seen Joe pushing it down 5th Avenue - I wouldn't dare put my hand near it. We used to take her out ourselves in the mornings, then the girl took her to the park in the afternoon while Mrs Vidvotsky & I went to a matinee or shopping & our husbands did business. Then after we had put Margie to bed we would all go off together to dinner, the theatre & have supper at some dancing cabaret. Mrs Vidvotsky is awfully nice - she is only 24 & has been married 5 years - they have no family. She showed me round all the shops - I bought two nice hats & some white blouses also a white linen dress. The childrens clothes were simply lovely. I got some nice dresses for Marjorie - a fine yellow linen empire, with turned back cuffs & collar of white & a black velvet belt - short sleeves. She is a dream in it with blue socks & black patent slippers; I also got her a blue in same style & a white linen with blue smocking. All this description is for Mary A's edification.
We came up to St John's by boat & of course I was sick again. It is quite a busy place but the shops are not up to much and the fashions very demodé. If I was old fashioned in New York, I was the biggest swell in St John's by a long chalk. This place is nearly a day's journey from St John's. It is very quiet, but pretty & I think I will like it all right. Joe is not yet sure whether we will be here for any length of time. He likes being here very much & says he has no desire to return to Scotland. He says I may go home for 2 months every winter if I like, but who would be bothered crossing the Atlantic in winter for that.
Joe is quite balmy about Marjorie - I found that everyone in the place had seen her photo & knew her name, age & weight & one kid had a doll called after her. [...]

I will be expecting a letter soon with all the news. [...]

Love from us all

"Curling is a sub-division of the city of Corner Brook, Newfoundland and Labrador. Located in the humber arm of the Bay of Islands, Curling was originally a fishing community. It is the oldest section of Corner Brook."


SS Tuscania was a luxury liner of the Cunard subsidiary Anchor Line, named after a town in Italy. She was torpedoed in 1918 by the German U-boat UB-77 while transporting American troops to Europe and sank, sending 210 people to their deaths.[3] https://en.wikipedia.org/wiki/SS_Tuscania_(1914)
See also; http://www.islayinfo.com/loss-troopship-tuscania-islay.html 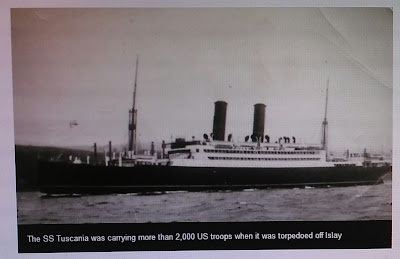 A commemorative service was held on the centenary of the Tuscania tragedy (BBC Scotland news item 5-2-2018, also available in Gaelic.) [And see comment below].
Posted by SmothPubs at 03:03