A diversion for (not from) International Women's Day.
What the school-age girl was reading, or being given to read. 80 years ago. 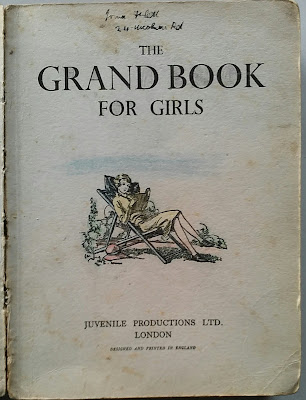 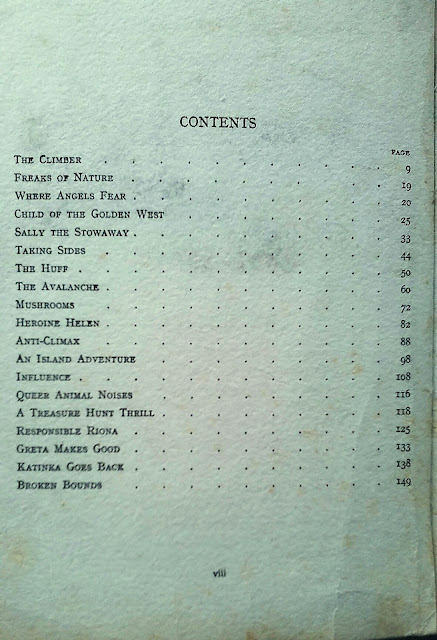 The Grand Book for Girls published by Juvenile Productions in the 1930s appeared in more than one edition, possibly for the Christmas market. (There are similar titles from other publishers at around the same time). It contains a mix of stories by anonymous authors, interspersed with short outbreaks of information pieces, 'interesting facts' and the like. The style is generally readable and in correct English, apart from half a dozen misplaced apostrophes. There are few concessions to children's reading age or young persons' (let alone'feminine') supposed sensibilities. 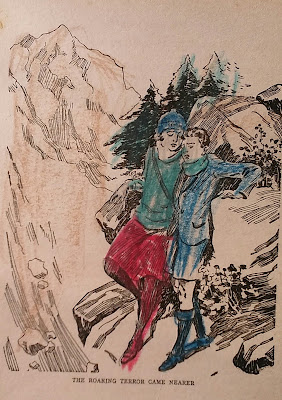 Most of the stories are adventure yarns involving peril and rescue, often of males by females, or the averting of disaster by quick, courageous action. The rescued are generally younger than their girl saviours, but not always. 'The Climber' finds 'the youth who had treated her with such contempt', and considerately saves his face into the bargain; a daughter (‘Where Angels Fear’) seeks out her father in the Himalayas where they both face 'Truth', no less, for which 'the world is not yet ready'.

Apart from this 'ancient wisdom' religion is largely absent (unlike similarly targeted works of a generation or two earlier|), except in 'Influence' where an orphaned girl brings about a rapprochement between her rough frontiersman guardian (who rescues her from the 'Cath'lic Mission' of Quebec and is prone to indulge in 'strange and horrid oaths') and the local minister (whom he calls 'that perishin' purple sky-pilot') - this one being also of the minority among the collection in emphasising home-making skills, and limiting the girl's role in the foiled-hold-up adventure to alerting the rescuer, leaving the real action to the men.


Elsewhere girls, fortunately hardy and self-reliant, aged about 15, frequently find themselves alone, needing to decide on and take risky action without help. Parents are seldom in evidence, generally relegated to background or periphery with teachers and other adults. In most cases, not quite all, the heroines confront the danger rather than being merely instigators or auxiliaries. This may involve being 'headstrong', breaking rules and flouting convention. 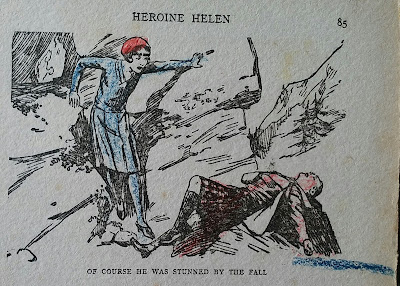 A minority of the stories are more banal, taking place in boarding school or holiday settings where misunderstandings are resolved and behaviour improved. There is a certain expectation of quasi-maternal attitudes, although these may vary. Riona has brought up a large brood of brothers and sisters almost single-handed; Una is determined not to be included in children's company rather than with grown-ups, but responds appropriately in a crisis while still insisting it should not be a children's party that celebrates her action. 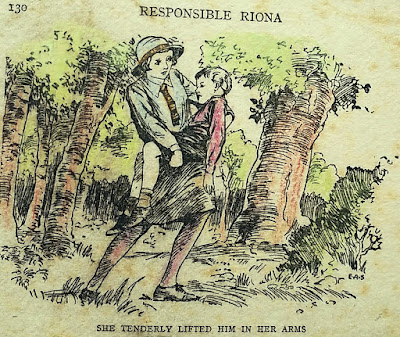 Male characters may be father figures, villains, brothers or cousins, even friends. There is no hint of romance, still less mention of sex (but see below), although at one school exclusive female friendships tend to get out of hand, loyalty to one's chum nearly leading to a mean action. Apart from pervasive, occasionally explicit assumptions that British is best, the Empire a good thing, and the ruling class benevolent, politics are avoided. Main characters are not socially of the lower orders, but devoted servants may play a useful part.

The oddest tales, unlikely to endear the book to readers 80 years on, are possibly the second last and third last. The thoroughly unpleasant ‘Greta Makes Good’ describes in disturbing detail how an Australian wins acceptance in English county society (in which 'beauty did not appeal greatly', much less her refusal to get up early to go 'cubbing') by breaking in a new 'hunter' (stallion): she 'felt a tremor run through the powerful body which was gripped between her slender thighs', proceeding via 'a smashing blow between the ears from the hunting crop she carried' until finally she 'had so established her mastery that she hunted all that season upon the horse she had conquered'.

'Katinka Goes Back' is the most complex and serious contribution, written by someone who clearly knew the background and was putting across a political message - an unequivocally counter-revolutionary one. Not political in the sense of discussing the issues: the heroine is rescued as a baby by a devoted servant from 'red ruin and revolution' in Russia, with no word of what led to revolution nor acknowledgement that a situation where one person might have a quarter of a million pounds worth of jewels while others were starving might have anything to do with it. Until the baby, Katinka, grows up the action is carried by the servant, Anna, and her fiancé Ivan, who devote their lives to the cause of her imprisoned mother. He is a descendant of 'countless generations of moujiks broken to service', so that's all right. When Katinka is 17 she takes over, organising an expedition to rescue her mother from a 'terrible penal settlement' with the aid of Anna and Ivan, her fortune from the smuggled jewels, a cunning plan, and British sailors eager to have a go at ‘the Bolshevik beasts’ although the enterprise is 'clean outside the law'. They succeed after a sentry is disposed of 'with bare hands' by Ivan in a 'pretty beastly' fashion, with a final bout of (welcomed) hand-to-hand combat in which all the Bolsheviks who have boarded the ship (flying the Union Jack) are 'finished off', the reader being left in no doubt that this is what they deserve. 'No question was asked afterwards'.

After all this, to end on a feel-better note, 'Breaking the Bounds' is a reassuring return to familiar territory with its mild subversion of rigid rule-keeping, advocacy of doing the honest thing, and beginning  of a firm schooldays-long friendship.

What Irma (and other young readers) may have made of such examples of potboilers, precepts and propaganda can't be known for sure. At any rate she did not treat the volume with undue reverence and certainly made use of it: the covers of her copy are missing, pictures are coloured in, and many of the (very thick) 156 pages are embellished with drawings, scribbles and word-games. All in all Auntie Kate might have made a worse choice of gift.