SmothPubs  Invergordon booklet tells the story.
See also:
Barry Duncan, Invergordon ’31: How Men of the RN Struck! and Won. Southampton, Duncan, 1976. 53pp. Original price £1 (out of print).  A very readable, informative account by a writer who knew the Navy, understood the politics, and had met some of those involved.   “The cover signal spells STRIKE.“ 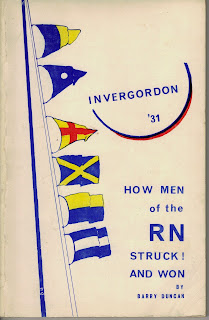 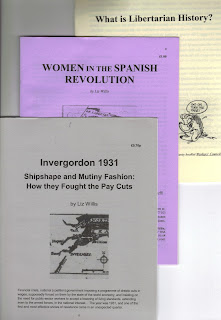 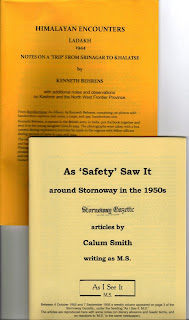 Posted by SmothPubs at 03:54 No comments:

Himalayan Encounters: Ladakh 1944. (Notes on a ‘Trip’ from Srinagar to Khalatse) by Kenneth Behrens.(2011). 20pp. £1.50
... with additional notes and observations on Kashmir and the North West Frontier Province.
From Recollections: An Album, containing 136 photos with handwritten captions and notes, 2 maps, and 2pp. handwritten text. Kenneth Behrens, an officer in the British army in India, put the book together and sent it to his young daughter in 1945. The original album was presented to the British Library in December 2007.


A new pdf of this pamphlet with images is now available
======================
Invergordon 1931. Shipshape and Mutiny Fashion: How they Fought the Pay Cuts, by Liz Willis (2011). £0.70p
Financial crisis, national (coalition) government imposing a programme of drastic cuts in wages, supposedly forced on them by the state of the world economy, and insisting on the need for public-sector workers to accept a lowering of living standards, extending even to the armed forces, in the national interest… The year was 1931, and one of the first and most effective shows of resistance came in an unexpected quarter.
A shorter version of this text appears in the current issue of  Black Flag, No.234, late 2011, pp.17-19 (with some nice pictures).
Posted by SmothPubs at 05:37 No comments:

Posted by SmothPubs at 06:03 No comments:


Short print-runs to allow for new editions on request, with updates and amendments.
Posted by SmothPubs at 05:39 No comments: