Jenny’s not so Well: Some summer holiday pictures from Moray

Sadly, walkers on this part of the Moray Coastal Trail, on the way to the Whale's Mouth rock formation from Cullen this August, found that the path to the Well was overgrown with waist-high (for an adult - small children were submerged) bracken, nettles, mint and other plants - and when they got there the well had been blocked off. The problem was evidently not that the flow of water had dried up - seepage into the ground in the vicinity was making parts of the track very water-logged, even in summer. One can only wonder why this has been done (misguided "Health and safety"? Costs of maintenance?), and whether the effects have been thought through.


For a long time the walk to Jenny's Well has been a favourite one for local Cullen residents such as Calum Smith as well as featuring on the itinerary, and among the holiday memories, of many tourists and visitors to the area.

Background     August 15th 100 Years Ago: In the summer of 1915 an ILP (Independent Labour Party) pamphlet warned of “The Peril of Conscription”; on 29th June a National Registration Bill was introduced by the government. According to David Boulton, the Bill was “almost universally understood to be the first step to compulsion” (Objection Overruled, p.78). When it became law, August 15th was set as the date for Registration of men of military age. As a result, it was found that about 5 million of these men “were not serving with the forces, Subtracting those in vital occupations and the medically unfit, it was estimated that between 1,700,000 and 1,800,000 available to serve had not volunteered.” (Boulton, op. cit., p.79)
Archibald Montague Mather, of 72, Adelaide Road, West Ealing, was aged 30 in early 1916 (d.o.b. 25th September 1885), when the first Military Service Act became law. As a journalist on the Middlesex County Times he was granted temporary exemption from conscription on the application of his employer, print media being inescapably necessary to disseminate information about and influence opinion in favour of wartime policy and regulations. At the same time, however, he made his own application, dated March 1st 1916, for exemption from combatant service on grounds of conscience: (Central Military Service Tribunal and Middlesex Appeal Tribunal: Minutes and Papers, Case Number: M2908, National Archives)
As a believer in the Lord Jesus Christ I accept the Word of God as my guide in maters of faith and conduct. I believe that it is wholly contrary to the Word of God that I should bear arms or take human life, & under no circumstances could I do so.
I have no conscientious objection to being placed in the Royal Army Medical Corps.
He explained, acknowledging receipt of the first certificate:

As there appears to be some doubt as to whether it will be possible for me to make an appeal for exemption from combatant service on conscientious grounds at the expiry of the present certificate granted on the appeal of my employers, I am forwarding herewith a form of appeal duly filled up.
I take it that this appeal will not be considered until the expiry of the present certificate or any renewal thereof that may be granted upon my employers’ appeal.
Yours faithfully,
A M Mather
In fact it was not until January 1917 that his application on ground ‘F’, conscience, was considered. The Local Tribunal’s decision on this was “application not acceded to”, for which they accounted to the Appeal Tribunal:

Exemption has been granted on four occasions to the above named on employer’s claims, the last one granted on the 10th inst being until the 10th March “Final”. The Tribunal on the 10th inst also considered the applicant’s application on Conscientious Grounds, which had been lodged on the 1st March last, but which had been adjourned from time to time on account of the employer’s claims. On being examined with regard to this, the appellant withdrew the second claim clause of his reasons in support of his application, as he understood that being passed B.1. he might after having taken the oath on entering the service, be transferred from the R.A.M.C. to a fighting unit, to which he had a conscientious objection.
It appeared that the appellant only joined the sect named “The Brethren” in July last, after having been a Baptist for many years.
The Tribunal dismissed the application on the grounds that the appellant’s conscientious objections were not bona fide.
Mather fortified his appeal against this judgment in an extended, typewritten statement of his beliefs, backed by several letters of support. About his change of religious affiliation (but not belief) he stated: “I joined a Baptist church at the age of fifteen... I have been meeting with the ‘Brethren’ at the Gospel Hall, The Grove, Ealing. In reference to my leaving the West Ealing Baptist Church, I should explain that I had felt for some time that my convictions on military service and other questions were so divergent from those held by the Pastor of the Church and many members that I was becoming increasingly out of fellowship...” 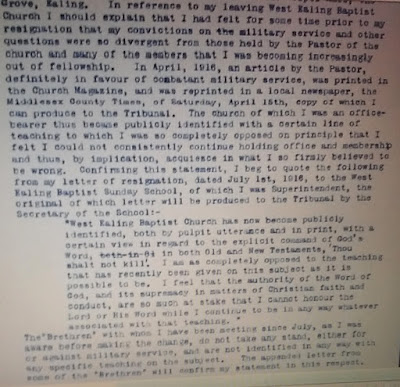 (This recalls the responses of Hanwell resident Arthur Morley Jones: “I am a member of the Baptist Church [..]  Until the present war I took it as a matter of course that it was [a tenet of this body that no member must engage in any military service whatsoever].")
Five fellow worshippers at the Gospel Hall signed a letter testifying to the sincerity of Mather’s beliefs as did, in separate letters, the Secretary and another member of his former church, the latter concluding: “I do not hold the same opinions but am convinced that no argument of mine or of anyone else will move him from the conscientious objection he holds”.
A longer statement of support came from the Editor of the local paper he worked on, although he neither shared Mather’s views – “They seem to me demonstrably wrong” – nor advocated being “soft” on conchies:

I know that it is necessary that the way of the conscientious objector should be made hard, for fear that imposters should tread therein, but I very much hope that the Army will not be put to the trouble of trying to force combatant service upon this man, nor he to the pain of resisting it. As a non-combatant he would enter the army cheerfully, and he should be able to render useful service in that capacity.
As I am chairman of one section of the Ealing Local Tribunal, I should like to add that I have taken no part whatever in adjudicating on this case, nor was I present at the hearing, and that I am offering this testimony to his sincerity in my private capacity.
Perhaps this common-sense view carried the day at the Appeal Tribunal. In the event they decided to grant Mather what he had asked for, exemption from combatant service, on the ground that “conscientious objection to combatant service has been established" (10 February 1917). Unlike the absolutists whose beliefs precluded joining the armed forces, whether ‘cheerfully’ or not, or knowingly rendering any useful service to the war-waging state, he could be accommodated within the system for dealing with such people. In short order he was fitted in: (from Pearce Register via IWM Conscientious Objectors' Register 1914-1918)
26.3.17 to Ealing Recruiting Office then Hounslow barracks. Posted initially to 13th Transport Works Battalion, Bedfordshire Regiment. Transferred to NCC (Non-Combatant Corps) (10 Eastern) 5.5.17 at Gravesend. Demob.12.2.19.
Not that service in the NCC was necessarily an easy option, but at any rate he survived for the duration without recorded trouble or disciplinary incident. An online source records that he married in 1919, in Ealing, and died in 1970.
Posted by SmothPubs at 06:42 No comments: