For International Conscientious Objectors' Day, 15 May
A day in the implementation of the Military Service Act
as reported in The Scotsman, 10 June 1916, p.8, cols. 6-7

When newspapers had pages full of news...
Amongst the war news reported on the 10th of June in The Scotsman (Edinburgh) there are several reports about reactions and resistance to conscription, introduced nationally in the Military Service Acts of 1916 (January and May). One of these features Dr John MacCallum, mentioned previously in a review of Robert Duncan's Objectors and Resisters and more extensively in a subsequent post.

ARGYLLSHIRE ASSISTANT MEDICAL OFFICER
_______________
FINED AS AN ABSEBTEE
In Oban Sheriff Court yesterday – before Sheriff Substitute Wallace – John Cameron MacCallum, M.B., Ch.B., Muckairn Manse, Taynuilt, recently Executive Tuberculosis Officer and Assistant Medical Officer for the Country of Argyll, appeared on a charge that, having been deemed to have been enlisted and transferred to the Army Reserve under the Military Service Act, and having on 13th may been called up from the Reserve for service, he failed to report himself at Stirling Castle on 30th May in accordance with the requirements of the notice served on him.
The accused pleaded not guilty.
In reply to the Sheriff-Substitute, he admitted a breach of the statute, but, in view of the conscientious objections which he held to participating in war service in any capacity, he maintained he could tender no other plea than that of not guilty. He acknowledged that he had not received a certificate for exemption as a conscientious objector, although he had applied for one.
Formal evidence having been led by the Procurator-Fiscal, the Sheriff-Substitute convicted the accused, and sentenced him to pay a fine of £2, or one week’s imprisonment.
On leaving the dock, Dr MacCallum was taken into custody by a military escort.
- The Scotsman, Saturday June 10, 1916, p.8, col.6-7. Military Service: Labour and Recruiting
Dr MacCallum was of course not alone in his stand, as shown in the next two reports. 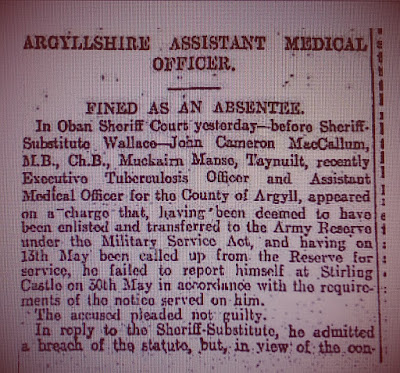 As is also well know and well documented, all was not quiescent on the labour front either - not only on 'Red' Clydeside.

The same columns contain brief notices of how conscription was affecting essential work (‘agricultural labour’, ‘female labour in bakeries’, and ‘Fife colliery’), and several industrial disputes: Edinburgh corporation workers wanting an increase in wages; Edinburgh painters rumoured to be nearing a settlement after 11 weeks; and Dundee calender [sic*] workers back to work after 3 months on strike with an expectation of having their claim considered. Not to mention Galsgow muntions workers and the vexed question of postponing the traditional ‘Glasgow Fair’ annual holidays, in the national interest of course.

Calender Girls?
(There were many women working in the jute industry in Dundee even before the war)
*CALENDERER / CALENDERMAN / CALENDER WORKER - operated a machine which pressed using two large rollers (calender) used to press and finish fabrics or paper. - Answer to an online query.
﻿ 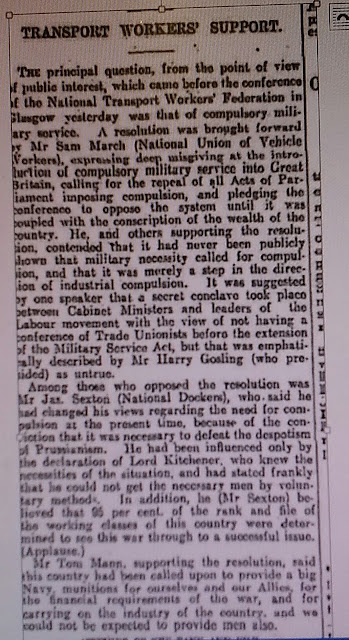 The official labour and trade union movement of course supported the war...but not unanimously.

Finally, column 8 on the same page under the heading Biographical Notes records the sad fate of many of those who had gone to the war. The whole page can be seen as a pdf. 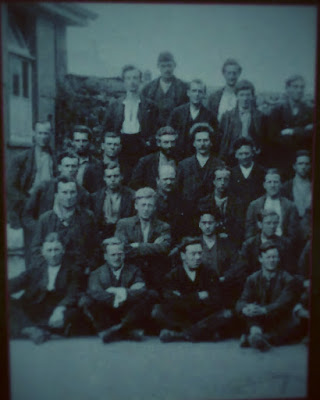 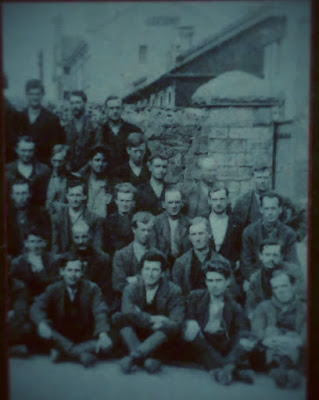 Sections of CO group photographs, as featured on the cover of
Voices from War and Some Labour Struggles (Edinburgh, Mercat Press, 1995), ed. Ian MacDougall
(no picture credits given other than for the cover design as a whole).

And a related news story from Edinburgh, 15-5-2018:
http://www.bbc.co.uk/news/uk-scotland-edinburgh-east-fife-44110224
------------------------------------
POSTSCRIPT:
Another small part of the story, this time from Aberdeen -
National Council Against Conscription (Aberdeen) (1916)
"During World War One, the National Council Against Conscription was established in response to the Military Service Bills of 1916, which introduced conscription for men between 18 and 40. The Council opposed conscription as an infringement on civil liberties and campaigned against the bill seeking to stop it passing through Parliament. The Council was one of many groups operating at the time, such as The No-Conscription Fellowship, and these groups monitored the work of the military tribunals and gave advice to the men who appeared before them. The Council changed its name in 1916 to The National Council for Civil Liberties (n.b. there was another organisation with the same
name from the early 1930s and which became Liberty, as it is known today).
"There was a branch in Aberdeen and William Davidson, a stores porter, Vice President of the Aberdeen Independent Labour Party, was secretary.
"References: Conscientious Objectors Register 1914 – 1918 at Imperial War Museum website (record of William Davidson)."
Posted by SmothPubs at 08:35 No comments: