More on 2012 anniversaries: 3. The British state versus anti-nuclear demonstrators in 1962

The OSA (Official Secrets Act) Trial of 1962: Some gleanings from the files
The British state had secured convictions on a charge of conspiracy against four Committee of 100 activists, for organising a demonstration at Wethersfield airbase. Sentences of imprisonment were handed down after a much publicised, patently politically motivated and blatantly unfair ‘show trial with the Attorney-General leading for the prosecution.’.  Reference: ‘The road to Wormwood Scrubs’, chapter 1 in Michael Randle and Pat Pottle, The Blake Escape: How We Freed George Blake and Why, Sphere Books, 1990, pp. 1-18. See also Peter Hain, Political Trials in Britain. Penguin 1985.
National Archives:  HO 291/63  Inadequacy or severity of sentences: Nuclear demonstrators.  [When accessed, this turned out to be a collection of 4 files bound together, under the one reference number]
[Notes from top file as above; the others related to earlier demos and arrests. Comments are those of the file, except when in square brackets]: -

Early Day Motion re. prerogative of mercy, Shinwell et al., 53 signatories. Leader of House declined to find time. Representations from Mrs Joyce Butler re. Helen Allegranza: no grounds for intervention found; no trouble since then as far as this prisoner is concerned.
28-6-62  Recent disturbances outside US air base at Greenham Common.  If prisoners were willing to abstain from illegal action in future, might be right to consider clemency, but no indication that this is the case; question of treatment in prison being pursued separately. House of Lords: Judges unanimous that offence had been proved. A number emphasised sincere motives of prisoners. No fresh grounds on which interference could properly be recommended.
1-7-62  Deputation. Shinwell, Greenwood, Brockway, Butler, Hart. Sir Charles Cunningham,
17/7: Clearly wrong that they should be treated differently; to do so would lend colour to claim that they are in prison for political reasons and form a special category; 4 [2?] of the men already in open prison on application of ordinary rules; Randle and Allegranza are difficult prisoners and it looks as though they would not behave themselves in open conditions.
Times 13-7-62, Law Report for 12/7: "Unconstitutional doctrine" (Devlin) put forward by Attorney General that once it was proved intention was to interfere with a prohibited place Judge should be entitled to direct jury to return Guilty verdict. Question whether nuclear weapons are in country's interests dependent on an infinity of considerations.

4-7-62 Note of Deputations. They referred once more to the "hunger strike" of Mrs Allegranza.
28/6 Briefing: In early May, Mrs Allegranza was "fasting" as a protest against the resumption by the US govt of nuclear tests and also withdrew her labour; awarded certain punishments by Governor and later by Visiting Cmte.; ended fast on 9th May, no further trouble. [See below]
Re. Greenham Common, interesting note (Times) that C100 had given pledge no attempt would be made to enter base, which may suggest that the "OSA trial" has had salutary effect. Fines, temp courtroom in Newbury; 196 arrests, 4 remanded in custody inc 18-year-old girl who would not give name; 1 Not Guilty; fines £2-£5 + costs / 3gns. [= £3.15p] for obstruction.  If this is raised, offences are not comparable. Trafalgar Sq. meeting planned for 7/7 re demo outside Air ministry on 9/9: to organise breaches of law, so cannot be allowed.  ["Raymond" Chandler on draft, uncorrected].

PCOM 9/2208 ALLEGRANZA, Helen: member of the `Committee of 100'; at Central Criminal Court (CCC) on 30 January 1962 convicted of conspiracy to commit breach of Official Secrets Act; sentenced to 12 months' imprisonment; died [whilst in after] confinement.  1962-1963
This file reveals the treatment in prison of the only female defendant, and her repeated clashes with the authorities, as well as detailing unsuccessful appeals made on her behalf. Knowledge of the level of support may not have been clear to her as letters to her were withheld  The description (when last seen) incorrectly states that she died in custody; in fact she committed suicide not long after her release. 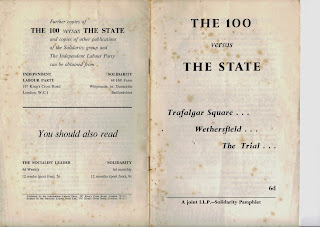 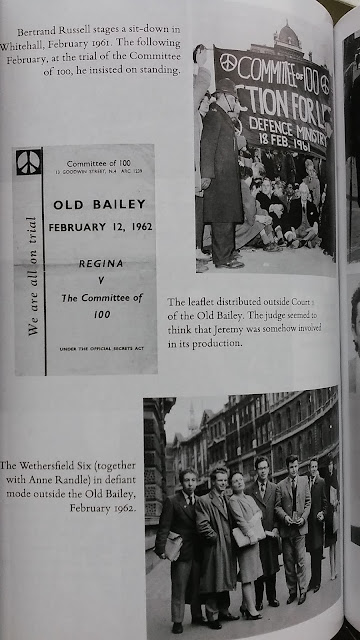 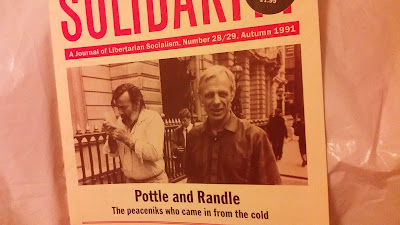 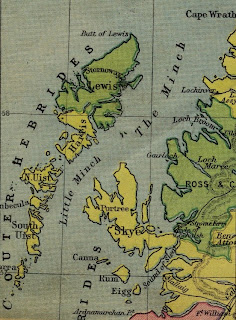