A brief Book Notice for November 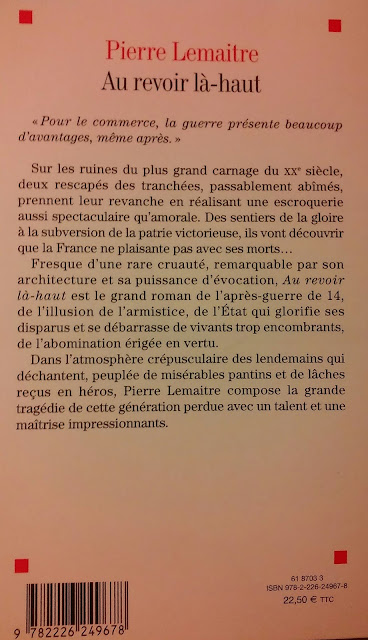 This extraordinary work does much to justify the publishers' claim for it as the great post-First-World-War novel. The French title is ambiguous: Good-bye up there, which fits the key scene, or See you up there /in heaven, which is the meaning expressed in the quotation it refers to. (Jean Blanchard, shot [see below] 4-12-14, rehabilitated 29-1-21)
Although the narrative is about two massive scams, (one based on an actual occurrence) triggered separately by the postwar orgy of patriotic commemoration, it is clear that The Great Swindle is the war itself. Only the opening sections are set prior to the Armistice but it is this time, early November 1918, that sets the conditions for the main characters' future lives and interwoven relationships.
The author has done research and put it to excellent use without obtruding his knowledge. Among the aspects of the reality of war and its aftermath to which he draws attention are mental and physical trauma, the chaos of demobilisation, and the mismatch between public adulation of dead heroes and the bleak prospect facing damaged survivors. The social context brings out further issues of class and gender. Altogether it is an absorbing and affecting read.
#1 Those who thought this war would soon be over had all died long ago.
#8 Non-stop milling about, indescribable chaos. Demobilisation Centre choc-a-block, men were to be discharged in batches of a few hundred but no-one knew how this was to be done; orders back and forth, procedure keeps changing. Men fed up, hassled, pouncing on smallest scrap of news and setting up a clamour, almost threatening... [In Britain this sort of situation was to lead to many instances of actual mutiny in 1919].

About Jean Blanchard;
Charged with deserting their post in the face of the enemy, six men including Jean Blanchard were sentenced to death by a summary court martial on 3rd December 1914 and shot the next morning. The verdict was overturned on 29th January 1921. A monument in their memory was erected at Vingré on April 5th 1925.

Previously on this blog;
Paris, March-June 2014. Introduction to an exhibition
(The like of which we are unlikely to see listed officially in the UK)

Posted by SmothPubs at 06:00 No comments: