So Proud he registered her twice?

The arrival of Marjorie Flett as a toddler in North America in May 1916 as recorded in one of her mother's letters has already been referred to on this blog. 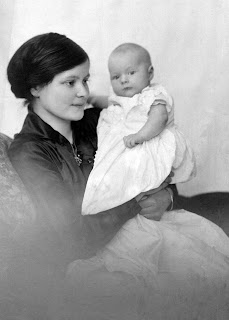 Joe is quite balmy about Marjorie - I found that everyone in the place had seen her photo & knew her name, age & weight & one kid had a doll called after her.


Although the spelling 'Marjorie' is consistently preferred by her mother, in the family she was usually 'Marjory' (except on the occasion of her marriage in 1946, when 'Marjorie' appears). It was as 'Marjory Joan Flett' that the baby's birth on 5th February 1915 was registered - twice.

Images from the double search result (below) confirm that the same birth is recorded in each case.

How and why this came about remains something of a puzzle. The details supplied by her father match exactly, so that at first sight it looks as though he may have assumed she needed to be registered in her place of residence as well as her birthplace and done so on his own initiative. At the time non-home births were the exception, still more so if occurring away from the family's home parish, and it is not known why the nursing home in Aberdeen was chosen - possibly there were fears for the mother's health, or Joe may simply have wanted what seemed to be the best care for her since, then, he could afford it.

A closer look, however, shows that far from being unaware of the duplication, the Registrar for Bellie transcribed the entry himself (or just possibly herself?), presumably from the original certificate issued in Aberdeen. This appears to be an unusual proceeding, and it would be interesting to know of any similar examples. Could the Registrar have been new to the job, replacing someone who had joined up, since this is a few months into the First World War, and unfamiliar with this sort of circumstance?

Nowadays it would no doubt be illegal, whether or not it was then, because of the potential it suggests for fraud, e.g. claiming benefits in different places, or identity theft - not the sort of thing that would have occurred to Marjory of course!

(As it happens, this item has been posted on the 124th anniversary of Marjory's mother's birth.)
Posted by SmothPubs at 08:05 No comments:

The anarchist summer camp that took place in Italy 50 years ago this summer seems to have virtually disappeared from the historical record, at least as far as online sources are concerned, despite the fact that the following year, around the time of the May Events, it briefly acquired an aura of notoriety when it emerged that Daniel Cohn-Bendit and his brother had been among those attending. Had it been, as alleged, an occasion for international conspiring or even a training-ground to foment unrest, leading to riot and revolution?

Well, no, or no more so than the more optimistic anarchists might normally hope to make it, although no doubt lively discussions took place and useful contacts may have been made.

This small set of tattered photographs is a reminder that it did happen, even if it didn't look much like the popular idea of revolutionary anarchists a-plotting, and that a good time was had by many.

Posted by SmothPubs at 07:27 No comments: