A little more about Emily

Contrary to Marina Warner’s assertion in the current issue of the London Review of Books (4-7-13 pp.19-20), it is hardly true to assert that “the circumstances of [Emily Wilding Davison’s] death are waiting for their historian.” Those circumstances are quite thoroughly examined in a recent book, Michael Tanner’s The Suffragette Derby (Robson Press, 2013). One problem is that they are embedded in an equally exhaustive and longer horse-racing story; another, that the key scene is recounted in the manner of a drama-documentary, not badly done in its way but not to be confused with history. In Chapter13, “I Will!” the author, while stating that “It is idle to speculate [about what thoughts might have been going through EWD’s head,] yet somewhat unavoidable”, supplies a screenplay scenario or radio script complete with those supposed thoughts.

The other relevant chapters, however, make it a useful, well-documented source for the actual history behind the myths and rhetoric – if you by-pass the author’s own lapses into rhetorical clichés and put-downs which he seems unable to resist. (Thus on p.174, Emily making a protest in the dock is “stamping her foot in a fit of pique”; her photo showing the effects of prison shows  “the battleaxe she became by 1913..” etc.) At the same time there is an attempt to empathise: p.175 “Goaded beyond reason by months of political indifference and state-sanctioned torture...”

Michael Tanner, as historian of the Derby, was one of the contributors to a Radio 4 programme
‘Deeds not Words’, broadcast at 11 a.m. on 10th May, in which crime fiction writer Val McDermid [spoiler alert in case of repeats] plausibly concluded by attributing to EWD a fatalistic state of mind which accepted the possibility or likelihood of a fatal outcome but was not totally committed to that result.
Sylvia Pankhurst too left the question of intention unresolved. Her account is among those of which the accuracy is cast in doubt by Tanner’s book, although she was no doubt writing in good faith, 18 years or so after the event and relying on others’ reports (E. Sylvia The Suffragette Movement: An Intimate Account of Persons and Ideals, first published 1931, Virago 1977, pp.467-70). She views her own immediate emotional response with some detachment, reproducing in full “Some sentences” she wrote which were “thrust into the letter-box of the Daily Mail, chosen as the typical organ of the unheeding world”:

O Deed Majestic! O Triumphant Death! Mean, sordid things they write of her …                Parliament sits, a House of Mockery! It proses on…                O dullard minds in power that cannot see great Freedom’s history making, great tragic acts under their very eyes!
Then she adds: “Strangely enough, the editor desired to publish this eccentric manifesto… returned it to me by post for confirmation. No longer wishing it to appear, I laid it aside.” 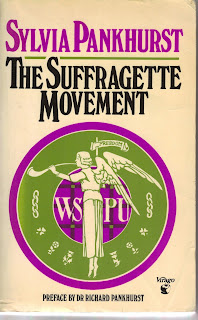 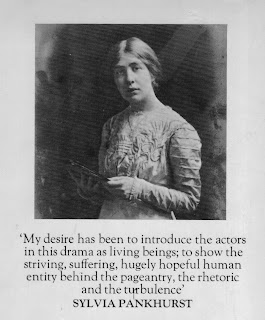