How to be happy though radioactive?


[Today’s related news story: http://www.bbc.co.uk/news/health-24063286 “Nuclear plants 'do not raise child cancer risk'”]
Although the funding for the local history project of which Sellafield Stories is the published result derived from the winding-up of British Nuclear Fuels Limited (BNFL), readers are assured of its independent stance. The aim was to record the experiences and views of ‘ordinary people’ in West Cumbria in relation to the notorious nuclear complex on their doorstep. Respondents were largely self-selected after local publicity. then an attempt was made to widen representation by seeking out others. (The original sound archive with 100 interviewees is on-line at http://www.sellafieldstories.org.uk.) In the book’s 36 selections from the interviews a certain imbalance, perhaps unavoidable, nevertheless persists: for one thing, thirty are from men’s voices and only seven from women (one interviewed jointly with her husband). Just one (female) anti-nuclear-power protestor is included.


Since most have been employed at Sellafield and none has moved away from its vicinity (or been put off by the BNFL connection) it is no surprise that few express opposition to nuclear power as such, despite often forthright criticism of how the plant was run, especially in the early years when it was known as Windscale. Lack of health-and-safety awareness in the bad old days, affecting workers perhaps more than the environment, is a recurring theme, as is the obsession with secrecy. The shock of the 1957 fire with the subsequent fear of contamination it engendered reverberates in many testimonies.


The transcripts are grouped in chronological sections with brief historical notes on each period, highlighting key changes. This is particularly useful in view of the editorial decision not to correct factual errors and failures of memory but to let authentic voices be heard, enhanced by a phonetic rendering of the local dialect in places. Speakers are not anonymous; photographs are supplied, and biographical details elicited. Some are clearly more used to presenting and justifying their opinions than others, scientists and managers being less inclined to admit to negative feelings or ambivalence.


Evidently many workers feel a certain need for self-justification, given the levels of protest directed at Sellafield over the years. Protestors come in for a fair amount of hostility, once to the extent of asking why police didn’t shoot them (‘We were told not to’, came the reply) even though ‘Some of them were nice enough’ (p.285). Elements of the anti-nuclear argument nevertheless got through from time to time, especially with regard to environmental pollution and the dangers of radiation. Chernobyl had a noticeable impact (Fukushima was yet to come). Several speakers allude to the debate over the incidence of leukaemia clusters  in the vicinity of nuclear installations, one going so far as to admit responsibility: ‘... [W]e caused that.’ (p.80) Another source of unease is the knowledge of military involvement: ‘Sellafield was described as the atomic bomb factory.’ (p.135) One man insists that he refused to work on anything to do with nuclear weapons.


Latterly, the problem of nuclear waste inevitably looms large. There have been numerous reminders since the book’s publication that its menace will not go away. In October 2012, according to the BBC, the National Audit Office found: an ‘intolerable risk’ posed by hazardous waste stored at Sellafield; failure to develop a long-term plan for waste; and costs of decommissioning spiralling out of control. Local residents may have been reassured to hear that ‘Operator Sellafield Ltd, said it welcomed the report's findings and was "making improvements"’ (< http://www.bbc.co.uk/news/uk-england-cumbria-19816861> . Accessed 9-11-12) .


It is salutary to be reminded of the human factor in detail and variety, as distinct from humanity as an abstraction, not only in history but in the continuing energy debate. While the occasionally startling inside information on the nuclear industry contained in this book may need checking, it provides a rare collection of insights into what it is like to work there or live in its shadow, and into how life-choices can entail a commitment to its continuation. For those who would like to see different choices made in future, and an end to such commitment, it is worth attending to these stories and trying to understand the mentalities behind them.


[November 2012. May be published in Medicine, Conflict & Survival and should be/become available at http://www.tandf.co.uk/journals/mcs] 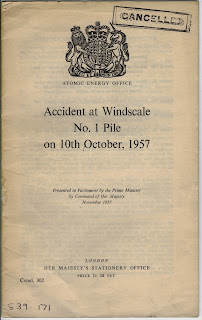 pp.23-34 ‘I heard about the S fire, the one in 1957… We’d better not say anything because it’s so-and-so’s livelihood. So sometimes you kept quiet, but you know, you were scared stiff really… I know nothing whatsoever about the scientific side of it… But really, I’d rather it hadn’t come…’

p.29 ‘… what they do with the waste. That worries me… I don’t know, I’m not scientific…’
p.37 ‘I could always tell when my husband had been irradiated… his hair was standing on end when he came home!’

p. 95 ‘… you nivver believed anything the government or the police ever telt you … # It was Greenpeace that catched Sellafield putting stuff oot.’
p. 97 ‘They always used to say, if anybody ivver mentions nuclear energy, you can put a third down to truth, a third down to lies, and a third down to bullshit…’

p.193 ‘What bedevilled Sellafield in those days was a sort of MoS/MoD mentality… It was tacitly acknowledged it was a dangerous plant and so we’ll put it somewhere out of the way so it affects as few people as possible.’
‘[Locals] turn a blind eye to the faults… too much.’ 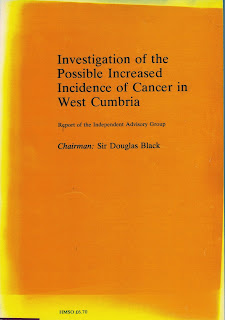