Outbreak of Peace at War Museum


Originally published in Medicine, Conflict & Survival, vol.23, no.4. Republished here in anticipation and some apprehension of the full reopening of the Imperial War Museum following the massive refurbishment at present under way preparatory to reorganisation around the First World War commemoration. It seems unlikely to enhance its peace-museum side.


Autumn 2013: “IWM London is undergoing a major building redevelopment, transforming our museum to mark the Centenary of the First World War.”


(The spelling-out of Imperial would seem to have become, belatedly, something of an embarrassment)


Braving the enormous naval guns dominating the approach and the tons of military hardware looming oppressively inside its main entrance, about a hundred assorted anti-war activists, students and interested parties made their way to London's Imperial War Museum (IWM) on Friday 13 and Saturday 14 April 2007 to attend a conference entitled 'Peace History: Encouragement and Warnings'. The invasion was officially sanctioned, and the event which occasioned it organised by the International Peace Bureau and the Movement for the Abolition of War, in association with the Imperial War Museum itself, a cooperative effort welcomed and appreciated on both sides.


The object of the exercise was to draw attention to forgotten or neglected aspects of history concerned with peace-building, with an emphasis on practical examples drawn mainly from the late nineteenth and the twentieth centuries. Before proceedings began and at intervals throughout the two days, participants had the opportunity to learn or remind themselves about many of these examples by browsing an impressive array of exhibits on the walls, celebrating women activists for peace on one side and Nobel prize winners on the other, while the Peace Museum (Bradford) was prominent among many organisations which made literature, posters, and speakers available. A banner of the Movement for the Abolition of War (MAW) beside the platform caught the eye and set the tone with its equation of war with poverty. 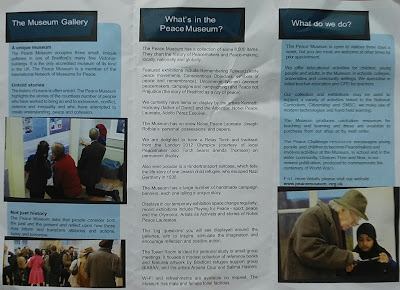 After introductory remarks from Bruce Kent, long-serving former chair of CND, and from the Director of the IWM pointing out that this location for such a conference was less incongruous than might appear, in view of its origin (commemorating the end of the First World War), Peter van den Dungen from the University of Bradford gave an informative paper on Bertha von Suttner, 'the woman behind the Nobel Peace Prize'. He summarised her eventful career and the influence of her writings, in particular Die Waffen Nieder! (1889), translated in 1892 as Lay Down Your Arms). Another two outstanding personalities were remembered in the following sessions: Hodgson Pratt, in connection with the early history of the International Peace Bureau (IPB); and Abdul Ghaffar Khan, the 'Frontier Gandhi' who proclaimed and fostered a non-violent Islamic tradition in the face of daunting difficulties. These two figures, as described by Verdiana Grossi (Univeristy of Geneva) and Shireen Shah (Bradford Peace Museum) respectively, had in common, in addition to their dedication to campaigning for peace, an awareness of the social context of their efforts and of the inestimable value of education. More social background, and more emphasis on collective action and general movements rather than individuals, was evident in the lively presentation on 'Civilian Resistance to US entry to the First World War', by Joe Fahey of Manhattan College, New York, who made the point that the peace movement needed to organise protest from below instead of always trying to appeal to the better natures, if any, of those in positions of power.


The first day's proceedings ended with a panel discussion and the programme continued on the Saturday, with an introduction on the IPB leading on to a paper from Terry Charman of the IWM on the League of Nations and the Briand-Kellogg Pact, which had sought, in the optimistic aftermath of the 'war to end wars', to outlaw war as an instrument of national policy. The history of the League was covered in some detail, acknowledging its short-lived successes and achievements in the areas of tackling epidemics; work for refugees and against slavery, provision of a passport for the stateless; in relation to labour conditions and in industrial health and safety. At the same time its limitations and the factors inhibiting it from achieving its ideal aim of guaranteeing world peace in perpetuity were discussed, including: problems of representation; dependence on the victorious powers; the occurrence of expulsions and withdrawals; a tendency to perennial indecision; and the fact that there was no legal obligation upon states to apply sanctions which it was anyway reluctant to enforce, indeed lacking the means to do so.


Kate Hudson (South Bank University), current Chair of CND, continued the story of attempts to ensure international peace, this time with reference to the World Government Movement, looking at its early history, 1945-1950. One impulse for its creation was a critique of the United Nations, based on the perception that sovereign states were part of the problem, therefore not the solution, and that their existence was itself the cause of war. The newly emerged atomic threat lent urgency to the project, which gained widespread support, recruiting about 400 communities to 'mondialisation' and speading the gospel of world citizenship, recorded in an International Registry in Paris. Its own model came in for some criticism, however, as being too closely based on western, even imperialist assumptions, Peace News, the newspaper of the Peace Pledge Union, being among those to voice dissent. There were concerns over the apparent intention that the proposed World Government was to have a monopoly of military force, including atomic and other weapons of mass destruction, and of weapons research and development, while mechanisms for control and accountability were unclear. Nevertheless a People's World Committee was established in 1950-51 in Geneva, and the plans included a World Bill of Rights, and Food Bank. That the idea still has its adherents, despite its decline with the onset of the Cold War and outbreak of the Korean War, was attested by at least one member of the audience, a world citizen still belonging to a mondialised community.


The afternoon began with a return to the theme of individual rejection of particpation in war, in a survey by Guido Grunewald (War Resisters International) of the history of conscientious objection, illustrated in its early stages by efforts that predated the First World War, in the form of non-violent anarchist publications and the English Peace Society's Pledge for Young Men (1902). The risks run by and suffering inflicted on those who followed this path, especially in wartime, were shown and compared, with an account of the legal situation in different places. While some governments enacted laws allowing for bona fide conscientious objectors (COs) to be excused from military conscription on some terms at least, their implementation was not always straightforward: in France, while such a law existed, there was a ban on publicising that same law, and Greece was carrying out executions for refusal of military service as late as 1949. Several countries were slow to introduce laws to make any provision for COs, delaying until the 1960s and 1970s. Discussion followed, in the course of which Bill Hetherington of Housmans Bookshop announced that a database of COs in the UK had collected 5,000 names, and people were encouraged to contribute to its further development if they knew of anyone in this category whose stand should be remembered.


In the last formal presentation the 'history of art working for peace' was summarised with reference to various modes of cultural production but especially using the visual arts, including posters and ephemera, many of which were shown in pictures of exhibits from the Bradford Peace Museum, and again supporters were invited to join in the preservation of this history by searching out any artefacts in their possession that might be offered to the collection. The conference concluded, after a summary of its coverage and success, with a film on Danish resistance to Nazi occupation, and a closing reception. Participants are likely to have taken more encouragement than warning from it overall, and anyone who wandered in from the IWM at large (leaflets were left at the main desk) could perhaps have come away with the feeling that working for peace is a less eccentric notion than the media would sometimes have us believe.


The Peace History Conference series was to continue, sometimes back at the IWM:-