It is no surprise to find inexactitude and bias in supposedly authoritative mainstream history and works of reference, especially when it comes to any manifestation or movement perceived as being left-wing or subversive. The dominant narrative about the British Campaign for Nuclear Disarmament (CND) has it going into decline almost as soon as it began. Thus the BBC giving “context” for a retrospective look at the first Aldermaston March:
1960:Thousands protest against H-bomb -
<< The last Aldermaston march took place in 1963, the same year the international test ban treaty was signed, which partially banned nuclear tests.
From then on, CND fell out of favour but re-emerged under the chairmanship of Bruce Kent in the 1980s ...
When the Cold War ended in 1990, CND went into decline once more. >>
This not only disparages the continuing presence and activity of CND into the present, it inaccurately implies that there was no large Easter March after 1963 (let alone to/from Aldermaston – see below).

Wikipedia is a bit better:
At Easter 1964 there was only a one-day march in London, partly because of the events of 1963 and partly because the logistics of the march, which, grown beyond all expectation, had exhausted the organisers. In 1965 there was a two-day march from High Wycombe. In 1972 and 2004 there were revivals of the Aldermaston march in the original direction.
While it may be argued that the event of 50 years ago was neither as sensational as in the “Spies for Peace” year nor as spectacular as the first few marches, and failed to make the same sort of impact, it still attracted many and varied groups and individuals, some already veterans but lots who were new to it, and for whom it was not a bad first experience of being on a demonstration.
If these were “doldrums” they were quite populous and lively ones. Some of the marchers had travelled hundreds of miles.
An overnight bus brought Aberdeen student CND supporters and members of the town’s CND almost the length of the country to the start of the march.


The mid-1960s reflorescence of Aberdeen YCND began to get under way around this time or shortly after: see Ban the Bomb and anti-Vietnam Movement in Aberdeen

Health warning: may contain inaccuracies
Early defections in march to Aldermaston But 2,000 still in the running By our London staff
Saturday 5 April 1958 - http://www.theguardian.com/century/1950-1959/Story/0,,105488,00.html
“Demonstrators at the CND march” picture at http://collections.museumoflondon.org.uk/Online/object.aspx?objectID=object-795589&start=428&rows=1 (but don’t believe every word of the rubric)
Video entitled Easter Peace March – 1965 http://clipbank.smrchs.com/espresso/clipbank/servlet/link?template=vid&macro=setResource&resourceID=1366
<< Content: At CND's annual Easter March for Peace protest marchers sing folk songs for peace and chant 'Out! Out! Out!' outside a US base in the UK.
Context: By mid-1960s there is increasing involvement of young people in the peace movement. Sixties youth culture, represented here at a CND Peace March in 1965 by longer hair, duffel coats, guitars, mouth organs, folk songs and a concern for social justice, is part of a growing political awareness and a questioning of the status quo. >>
1957: Britain drops its first H-bomb http://news.bbc.co.uk/onthisday/hi/dates/stories/may/15/newsid_2510000/2510335.stm
Peace campaigners return to Aldermaston (7 April, 2004) http://news.bbc.co.uk/1/hi/uk/3575175.stm
Health warning: The above summary accounts may contain inaccuracies. 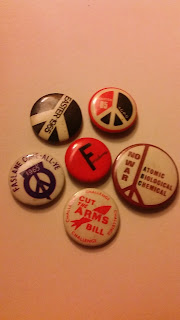 "... the transmission of the BBC's The War Game, directed by Peter Watkins, was stopped at the eleventh hour with an official announcement that it was too shocking for public viewing. The BBC's Director General, Sir Hugh Carleton-Greene, claimed it had been the Corporation's decision alone - but this programme reveals the part played by senior figures in Whitehall and members of Harold Wilson's government.

Peter Watkins's groundbreaking film went on to win an Oscar and influenced a generation of film makers. The film suggested that the government's Civil Defence plans were hopelessly inadequate and would leave millions of UK citizens to die in the event of a Soviet nuclear attack.

Interviewees in this programme* include: former BBC Chairman of Governors Sir Christopher Bland who is "astonished" to see the files; campaigning journalist Duncan Campbell on the factual accuracy of Watkins's film; Hugh Greene's official biographer Michael Tracey; Bruce Kent of CND; and Derek Ware, the stunt co-ordinator on the film.

The programme also includes Professor John Cook, who obtained the previously secret files under a Freedom of Information request.

Michael Apted is perhaps best known for directing the "Up" series of TV programmes, but is also the director of 26 movies including James Bond in The World Is Not Enough, Gorillas In The Mist and Enigma.

One of Aberdeen YCND's more successful campaigns was lobbying for a showing of the film of The War Game in a cinema in the city. It was shown, at the Cosmo 2:


"A cinema converted from stables, which had operated as a News Cinema from the 1930s although it latterly went through various name changes until becoming an off-shoot of The Cosmo Cinema, Rose Street, Glasgow, a repertory cinema with the highest reputation for showing the best of world cinema since its opening in 1939. COSMO 2 CINEMA, 13-15 DIAMOND STREET, ABERDEEN.."