Protesting against CBW: At Porton Down, 1965

In the official history of the Biological side of the British government’s CBW Research Establishment at Porton Down there are several references to demonstrations being held there  by activists opposed to weapons of mass destruction (a phrase which was in use at least since the early 1950s, the time of the Korean war.) One of these took place just 50 years ago, in September 1965.
Hammond PM, Carter G, From Biological Warfare to Healthcare: Porton Down, 1940-2000 (Basingstoke: Palgrave, 2002).
Chapter 6 on 'The New Establishment 1948-51' gives an account, of the setting up and construction of the Microbiological Research Department* (to focus on germs rather than gas) as part of the set-up at Porton. [How it appeared to a young female civil servant seconded as one of the first clerical workers there may be seen in fascinating subjective detail in an online publication.]  MRD Experimental Plant No.1 was handed over by the Ministry of Works on 14-10-48, with some work still outstanding, finally handed over to MRD 29-3-49.
Ch.15, 'Public Perceptions' mentions demonstrations, as follows (accuracy of details not guaranteed, obviously):
Comparatively ‘low-key’ or not, the 1965 demo was one in which the authorities took plenty of interest.


Demonstrators expected to be letting themselves in for being caught on camera, but probably few if any realised they would actually be filmed:
[Film] CND (CAMPAIGN FOR NUCLEAR DISARMAMENT) DEMONSTRATION AT THE MAIN GATE OF PORTON DOWN, 1965 [Allocated Title]
16mm  Catalogue number DED 256  Production date 1965; Porton Down (Production company)
Film shot on behalf of the Chemical Defence Establishment [sic] shows members of CND [sic] gathering for a demonstration outside one of the traffic gates into the complex; some of the protesters are filmed trespassing on Ministry of Defence Land. The camera is, for the most part, situated within the perimeter of the Porton Down Establishment. Content description:
Placard on the bridge over the railway at Porton on behalf of a hunger striker reads: "I am fasting to express my contempt for the inhuman work carried out at Porton". A crowd of CND supporters gather at the modest access gate ("Haven Gate"), watched over by older members of the Ministry of Defence Police. The atmosphere is calm. Most of the demonstrators appear to be in their twenties, although there are some older people. Many carry placards: "Porton for the People!", "Reverence for Life - Schweitzer" etc. Camera focuses on their faces; some of the protesters jeer, many give a two-fingered "salute", others try to hide their identities. Many take photographs of the MOD camera itself. Viewpoint moves to Porton Pheasant Road, where demonstrators are filmed climbing gates and fences and trespassing on the broad Porton ranges. Long shots of clusters of people; many are carrying banners - "Porton for Peace" etc. One demonstrator has a large Soviet flag. Soldiers, MOD Police and members of the local constabulary gather up the clusters of protestors and escort them off the land. A small group of protesters climb a meteorological tower on Black Barn Road. Individual protesters are arrested by soldiers and put in the back of an MOD Land Rover; outside, the police take their details (many of the arrestees are sitting or lying on the ground). A group of protesters from the Dundee branch of the anti-war group the Committee of 100 are challenged by police. Some demonstrators sit in road, impeding passing vehicles. Back at Haven Gate, speakers address the crowd. An army lorry tries to leave the complex; it is blocked by the demonstrators who attempt to remove the canvas cover at the rear of the lorry. [Copied from the above link, with a few typos corrected].
No doubt due to this film, there are more pictures from September 1965 at Porton online, available e.g. by searching Images for porton down protest 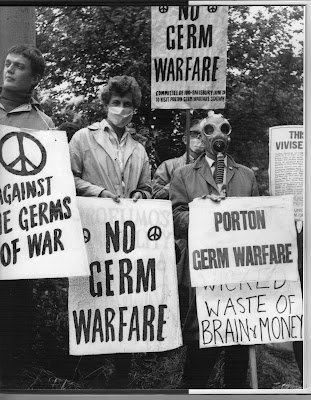