YCND: When it was all kicking off in Aberdeen

CND-related Diary 1964-65: From a small student society to an active group in the town 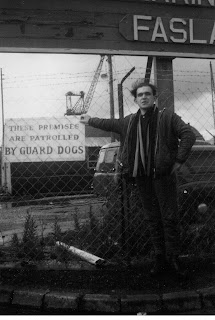 Looking back 45 years later, the diarist as above recalled "the mid-sixties Aberdeen YCND, a phenomenon worthy of being written up in its own right":
"Attracting 70 or 80 to meetings at its height, its activities included white-washing slogans on the streets, a money-raising fast for War on Want, raids on the nearest Civil Defence centre, leafleting at Edzell USAF base, a protest fast at Rosyth naval dockyard, producing 2 or 3 issues [more, actually] of a magazine, Megaton, and, for some of us, supporting local busmen and paperworkers' struggles and trying to sell Solidarity round high-rise council flats - not to mention organising sundry demos, late licences, folk-song sessions and weekends in the hills."

For more on the group and what happened next see:
https://lenathehyena.wordpress.com/tag/aberdeen-ycnd/
(includes another diary from 1965, by a 15-year-old schoolgirl)