Mad to Oppose the War? Four COs in Hanwell Asylum, 1917

(Actually the London County Asylum at the time.) Some excerpted history:


The three-storey yellow brick building opened in May, 1831...
By 1841 90 staff were looking after 1302 patients.
By 1888 there were 1891 patients and the Asylum had become the largest in Europe.
It achieved great prominence in the field of psychiatric care because of two people:

In 1889 the newly formed London County Council took over and the Asylum was renamed the London County Asylum, Hanwell. By 1891 there were 139 members of staff caring for 1899 patients, 1138 of whom were female.  Patients were looked after by members of their own sex and there were two gatehouses at the entrance - one for males and one for females. 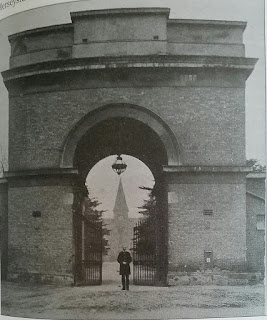 Only four of the (approximately) 30 COs declared to be insane during the First World War were sent to Hanwell (the familiar term is used here to denote the asylum as above), all within a few months in 1917 after their cases were considered by the Central Tribunal at Wormwood Scrubs prison, where they served time. None came from the London area, and none stayed in Hanwell for very long; perhaps the experiment of committing them there was not considered appropriate or successful, or it may have been intended only as a temporary staging-post between the Scrubs and other institutions.
==================

Evelyn W. Harbord, a schoolteacher from Ipswich, was aged 28 in 1917.
His story is the saddest of the four:
- Died the following month, Sept.1917.
Cause of death is not stated in the record, but it seems a reasonable inference that prison, hard labour, and his hunger strike (and the treatment associated with it) may have played a part, to say the least.

Six years earlier he was living with his widowed mother and older sister Mabel, who was an Assistant Teacher like himself: Mabel survived until 1953, when she died in her father's home town, Yarmouth.

*The gender mistake in the 1891 Census transcription is repeated in Evelyn's death record (both recently accessed at time of posting), no doubt due to his first given name being a unisex one:

Probably granted ECS (exemption form combatant service only) by his local tribunal, he was
Sent to Hanwell Asylum 5.7.17

Andrew May Watt, 23 in 1917, was a Presbyterian from (on the evidence) even farther away, North-East Scotland. Presumably refused exemption at his local tribunal, if he applied, he was:
Sent to Hanwell Asylum 5.7.17: Mental illness, certified insane.

Thomas Bamford, a 29-year-old Ovenman from Burslem, Stoke-on-Trent, was married, with a family, and a Primitive Methodist.
Discharged as no longer fit for service 27.11.17 - required to present himself for annual medical under Military Service (Review of conscription) Act 1917

=======================
Work in Progress
There is much more to be discovered about the interface between the history of psychiatry and that of First World War COs, principally but  not only those who were certified and committed - there is another story about rather more who were sent to mental hospitals to do their "work of national importance".

For several references to the mental health damage caused to COs by their treatment in the army, prison, and work camps, see: Conscientious Objectors of the Second World War: Refusing to Fight by Ann Kramer (Pen & Sword, 2014): pp.80-82 etc.