History of Stornoway Airport: a fragment

Seeing that the next meeting of the Stornoway Historical Society is to be on the subject of the history of Stornoway Airport*, the following brief first-hand recollection from the Second World War may be of interest to those planning to attend (or unable to do so).

The aerodrome at Stornoway

During part of the war I worked as a clerk at the Stornoway aerodrome, which was expanded to meet the military needs of the time. I remember particularly, on one occasion, watching a large number of American planes coming in to land, one after the other, filling up the runways. The fourth runway had been constructed only recently, at considerable expense, by my employers, the firm William Tawse.

When the war started, all of us who had been working in the Labour Exchange (known as the Burroo) in Stornoway were paid off, because the unemployed men were called up, so there was no work for us; our own employment had been on a temporary basis. In the hope of finding another job, I put an advert in the Stornoway Gazette - "anything considered" - and was taken on as a shop assistant in the town, in "Sammy's", where I also did the book-keeping. I don't know how it came about, but one day I was called in to the office to meet Mr Pirie, the agent for works contractors William Tawse Ltd. He said he didn't think my skills were being used properly in the shop, and offered me a job, which I accepted, as a wages clerk at the quarry, at Marybank. To get to work from the town I had to stop the lorries on their way there to get a lift. 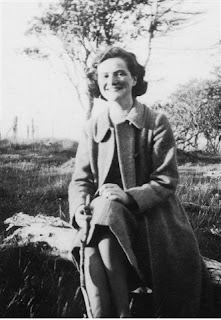 Tawse took over the contract for the work at the aerodrome, building the new runway - the firm brought in originally hadn't been up to the job, but Tawse had experience with conditions on the island, including making roads on peat. They shifted me with other clerical workers from the quarry to the aerodrome, which of course had priority at this time, and brought some more workers from Aberdeen. Transport was provided: no more hitching lifts, instead the agent went round the town and picked us up in the morning.
Later, when the work was running down, there was a suggestion that I might be transferred to Aberdeen. I was keen to accept but nothing came of it, apparently because they would have had to pay me more than the local workers there, to cover the cost of digs, and this might have caused bad feeling.

There had been some muttering about whether the expenditure on the aerodrome was excessive, but the Tawse agent, standing beside me as we watched all those US aircraft landing safely, observed that if anyone had any doubts about its being worth while, that day would have settled them and justified it - there was nowhere else in the country for them to land, because of fog. 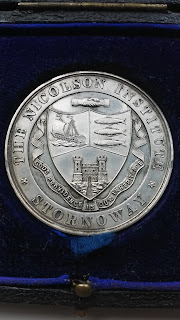 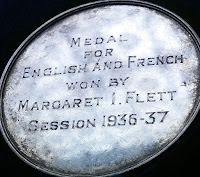 Peggy was (of course) a former pupil of the Nicolson, subject of the Society's previous meeting.

* "The fourth in the Society’s winter series of public lectures for 2016/17 will be held on Thursday 23 February 2017 at 7.00 p.m. in the Council Chambers, Sandwick Road.
Our guest speaker will be Duncan Smith and his subject will be the history of Stornoway Airport.
Entry by donation at the door.  SHS."

I recall a very exciting incident... I would be about 10 years old, that dates it to 1930. We heard a humming noise that got louder and louder, then someone shouted - an aeroplane. Not even [the teacher] could stop the rush of the whole class running out to see them. We thought they were toys, because we had no idea of the size of an aeroplane close up, we had never seen one. They were biplane seaplanes and they landed in the harbour. Unfortunately one of them damaged a float on landing and it drifted on to the beach at Holm. It was damaged beyond repair. I still have a souvenir from that wrecked seaplane, one of the wing struts which I made into a paper knife.  - AC (1920-2015).


AC sent his "paperknife" photograph to an old friend along with the front page of an article from Eilean an Fhraoich magazine, 'Airport at War', by Rodney Long (full reference not given). This indicates that AC (then in his late 80s, at least) was conflating two incidents: planes that came over in June 1930, and the accident that provided the aeleron in 1935. 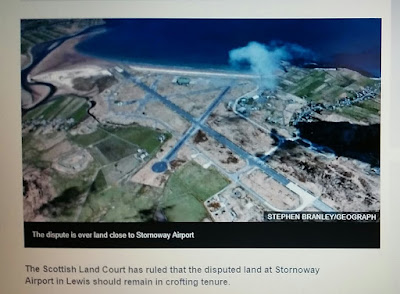