"Gypsy Roma Traveller History Month (GRTHM) started in 2001 in Brent and in 2008 it was celebrated across the country with backing from the government. GRTHM is an important opportunity for communities to celebrate their heritage and for everyone to learn about the history, achievements and cultures of Gypsies, Roma and Travellers."

A Place In The Sun?

In Violet Jacob’s poem [The Lad ‘i the Muin] the lad who is looking out of the window at the moon and who feels the call of the open road, says:–

“When I’m as big as the tinkler-man
That sings i’ the loan a’ day.
I’ll bide wi’ him in the tinkler-van
Wi’ a wee-bit pot and a wee-bit pan;
But I’ll no tell Grannie my bonnie plan,
For I dinna ken what she’ll say.”

But the days when there was any romance for a lad in the prospect of living in a van with a tinker-man are fast disappearing, and in this part of the world they have gone altogether. The “old order” has changed and, unfortunately, the new is, so far, shoddy by comparison.

I am one of those fortunate people who have the honour, because of beneficial experience, of being able to wear the same “old school tie” – elementary school that is – as some of the tinkers. I have sat in class at school with them, played football with them, sat in their tents and talked with them; and even during the war found myself once, as a seaman, standing in the same pay-queue as a tinker whose surname started with the same letters as mine, and who, incidentally, wore on his naval uniform the campaign ribbons of the 1914-18 war in which he had served as a soldier. For these reasons I may perhaps be excused for embarking upon the controversial subject of the fate of these people.

Time was when the tinkers as we knew them were nomads – camped outside one village tonight and tomorrow night on the outskirts of another twenty miles away – pursuing their occupations as rag-collectors, tinsmiths, and horse-dealers. But times have changed and waste-wool collecting has become the lucrative occupation of more “respectable” citizens, tinsmithing has been made uneconomic by the marketing of machine-made, mass-produced articles of better quality and longer life, and horses have been ousted by motor vehicles and tractors. There are no longer any reasons extant for the tinker being a nomad and so we find settlements springing up in the place of temporary encampments. And, further, it is becoming increasingly obvious that some of these settlements are not altogether desirable and do not provide a way of life suited to recognised present-day requirements.

To my way of thinking this problem, and that it is a problem is clear, cannot just be ignored. The rest of us cannot go on with our own affairs, living our own lives, and conforming to accepted social precepts and, at the same time, treating these people as a separate society or as if they weren’t there.

In this part of the world there is no colour bar – at least, not noticeably so. Coloured people are permitted to use our eating and drinking places, shops and all normal facilities without question; they are allowed to live among us without any attempt at segregation. The same treatment and courtesies are meted out to tinkers – until it comes to the point of letting them live among us. Then segregation creeps in – and there’s the rub. A very serious rub it is too, for any right-thinking or free-thinking person, because the answer to the problem is not to put these people in a reservation, for obviously what were originally voluntary settlements are developing into reservations once those who are in them are prevented from leaving them. And on every occasion when some enterprising member of the tinker community attempts to buy his way out of his present environment and into ordinary society he is vetoed by authority.

Now history shows that the policy of keeping people on reservations leads to extinction. And there is no question but that an analysis of the present situation leads one to the conclusion that the fate of these people must be absorption or extinction. The only question that remains is whether we, as a society, are going to let them waste away or whether we are going to stretch out a helping hand in their struggle for adjustment to changed conditions. The number of them who are engaged on public works (some of their women even work in hospitals) shows that they themselves have seen the writing on the wall as far as their former occupations are concerned. The fact that some of them are trying to buy houses and crofts shows a new awareness. They have done with the old ways of living. Are we going to hinder or help?

The time would seem to be ripe for a thorough and exhaustive examination of the position by the responsible authorities, a re-orientation of ideas about tinkers as a class, and the formulation of a progressive and benevolent policy to help them “rise on stepping stones of their dead selves to better things”. 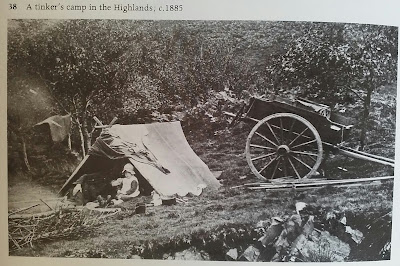