All Sundays were long days in the Isles...

"There is a proverb in the isles which says ‘As long as a Communion Sunday’. And all Sundays were long days in the isles when there was little or nothing to do except attend the services. In my youth around the turn of the [last] century, it was a day of worship, when the influence of the church was very strong and one dared not do otherwise even if one felt like it. Today [c1950s] it is more or less a day of rest and some people are daring to do small jobs on the Lord’s Day."

Kenneth MacDonald, the socialist teacher from Sandwick mentioned in a previous post, goes on to describe what such a day was like for a child - not much fun. One permitted, indeed prescribed occupation was rote-learning the Shorter Catechism (107 Qs&As).


Reassuringly, by no means all were cowed into piety and submission:
There were times, however, when we managed to slip away from the rigours of the Sabbath and played away from prying eyes on the sands… It was a sin to chastise or punish on the Sabbath [but retribution might well follow on Monday if transgressions were observed and reported] … Everybody stayed indoors on Sunday and read the Bible or [in Gaelic] The Pilgrim’s Progress.

Macdonald supplies a classic example of the absurd lengths to which strict interpretations of the 'law' could lead, with the story of a teacher who cycled to her lodgings in Stornoway from her home in the country on Sunday evening to be ready for work the next day, and was threatened with being thrown out by her landlady for breaking the Sabbath. When she pointed out that the minister drove to church she was told that was not the same at all: on her bike she was 'working' her legs, not like a driver in a car.


Many Stornowegians will share the memory, evoked in the most recent stramash about the opening of businesses or recreational centres – in this case a small specialised shop – on the Isle of Lewis on Sunday, of the melancholy sight of chained-up swings, including “baby-chairs”. Perhaps the toddlers’ little legs, or the arms of parents pushing them, would have worked so hard as to give offence to the Almighty.


A minister said a request was made to a businesswoman to close her shop on Sundays in a bid to encourage people to "enjoy the peace of the Sabbath".


... Mr Flett, who like The Rev MacDonald was born and brought up on Lewis, said he could remember [a] time when play park swings were chained up at dusk on Saturdays for the Sabbath.

Post Second World War, the Stornoway Free Church minister who was the main public face of opposition to any mitigation of such rigours was, perhaps somewhat surprisingly, not a native if the island, but came from Dingwall and began his Sabbath-preserving activism on the Isle of Skye, as recorded in the biographical material published with his 'Diary' (Diary of Kenneth A MacRae, edited with additional material by Iain H Murray. Edinburgh, Banner of Truth, 1980). 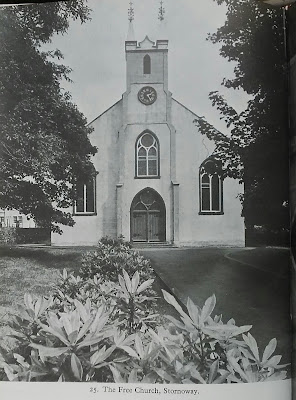 ... An unexpected issue arose which, as it required his presence in Skye, [temporarily] closed the question of his accepting a call away from the Island. Early in 1929 news was circulated that the London Midland and Scottish Railway Company was planning railway excursions from Inverness to Kyle on Sundays, so that trippers could cross to Skye. Immediately MacRae circulated petition forms against this proposal... When, in June 1929, it became clear that they intended to proceed with the plans for excursions, MacRae originated a 'Skye Sabbath Defence League'... the action in view being a boycott of the L.M.S. [...]
He found it a hard battle to raise the support which was necessary... The truth is that he did not relish controversy... (pp.222-3)
- from 'The Call to Stornoway' in Diary of Kenneth A MacRae.

The minister evidently relished victory in controversy, however. When a letter in October 1930 informed MacRae that 'Sabbath excursions would not be run next summer to Kyle if our agitation in the Island would end' he was jubilant: 'This is the doing of the Lord and wondrous in our eyes!' His editor considers that a result of this episode was that companies were restrained for many years from trying to implement similar changes. 'When, for example, air services to the Outer Hebrides were being discussed in June 1933 it was at once realised that there would be no Sunday flights.'

The preoccupation was not a new one for MacRae, and not newly controversial, as shown in earlier diary extracts from when he was based in Lochgilphead, Argyllshire:

1n 1917 - 10-8 A letter from home states that a very bitter letter has appeared in the local paper against me in reference to what I said in respect of visitors and the Sabbath; and 22-8 Another letter appeared in the local paper criticising my preaching, and since the tone is in no wise improved with the change of editorship I sent down to the newsagent cancelling my order.
The following year: 7-6 An Arran woman told him how 'one of the old divines had said the time would come when people profaning the Sabbath would be as numerous on the hills as were the sheep then'; and a month later, 6-7  When I was having supper with Miss Scott on Thursday she told me that she asked Mr Livingstone at the time when the letters were appearing in the local paper condemning myself, as to why none of the other ministers said a word in my defence. '"Oh we don't like controversy" was the reply.'

He remained vigilant after accepting the 'call' to Stornoway:

3-4-1934 Had meeting of Presbytery today. Strongly protested against the new regulations which give the Pope and his nuncios naval salutes, and also agreed to approach Woolworth's in connection with the opening of their establishment in Stornoway, with a view to the prevention of any risk of Sabbath work, as has happened under similar circumstances elsewhere. It is high time that strong action was taken against the secret Roman propaganda presently going on in governmental departments.
The perceived excesses of the 'Continental' Sunday were naturally the more deplored for their association with Roman Catholicism. (At this point fans of Hancock's Half Hour may recall the Sunday afternoon episode where the lad waxes lyrical about how different it is in other countries, everyone getting together, happy and laughing, enjoying themselves: "Not over 'ere, though!")

In the following month, May 1934, Murray tells us, he clashed once more with the LMS Railway Company when it announced its intention to run two Sunday excursions to Skye in the summer. MacRae wrote to the Glasgow Herald protesting against this, which led to him being contacted by reporters from two other papers. He got an article published in the Daily Express, but for the next several months he was out of action due to illness. Presumably the excursions went ahead.

The changed circumstances of another world war unsurprisingly failed to modify his stance:, and he was in a position to expect his views to be heeded:
10-12-40... I have been appointed Officiating Chaplain to the local R.A.F. Squadron. Received the information with rather mixed feelings. I don't know how it is going to work.

Problems did indeed arise:
28-4-41 Yesterday, for the first time in its history, Stornoway witnessed a game of football on the Lord's Day. The offenders were naval men. Today... I interviewed the Commanding Officer at the base... He told me that these men had broken the regulations and must have smuggled the football on shore, and that he would signal from the Base at once that there must be no more such offence. He undertook also to notify the commanders of all the vessels that there must be no more football on the Sabbath.

23-7-41 Was told today that the R.A.F. were playing football on Sabbath on the Melbost pitch. Wrote the Commanding Officer regarding the matter and asked him to act as the naval authorities have done in prohibiting games on the Sabbath. Perhaps the defence of the Sabbath furnishes another reason for my remaining in Stornoway. In Glasgow the Sabbath is gone in any case. Here it is in the balance. [He was 'under call' to Duke Street Free Church at the time].

28-7-41 The Commanding Officer, after plying the usual pretext that the arduous duties of the men allow them no other day free for recreation, has promised that there will be no more ‘Sunday games’… I suggested that the men might more profitably use up their surplus energies by walking in to the church services in Stornoway, and assured him that I would be delighted to see them.

Later in life, he wrote often with regret for the good old days:
“Fifty years ago [c1900s] the Sabbath was universally observed throughout Scotland, and whatever desecration there might have been was furtive and shame-faced. This being so, church-going was the order everywhere…” (Quoted on p.8).

That the balance has shifted further in the past half-century is clear enough. It can no longer be argued with any plausibility that public opinion is overwhelmingly in favour of the 'old ways' - and there were always dissidents. Some more recent signs:
New row about Sunday openings on Isle of Lewis
An Lanntair in Stornoway will not open on Sundays
Lewis leisure centre campaigners continue Sunday opening fight