Kenneth A MacRae's diary for 1939 is missing, so that his immediate reaction to the outbreak of the Second World War is not recorded. There is however some account of that time in Stornoway in the introduction to chapter 14, “Preservation from national destruction, 1940-42” of the published diary extracts (cited with reference to the First World War on this blog), as on p.324, describing how naval reservists filed to the pier on the last Sunday in August (a week before the famous broadcast announcing the declaration of war by Britain). The Stornoway Gazette reported the largest crowd ever seen there, “strangely silent”. By the fifth month of the war, January 1940, an estimated 8-10% of the population of the island of Lewis were on active service or under training.

1940
On New Year’s Day MacRae noted, “The year has come in amid the gloom of a colossal war which only seems to be beginning.” As in the First World War one of his main preoccupations was the spiritual welfare, as he saw it, of the troops. Two days later (3-1) he was trying to get names and addresses to send some “good” literature to local recruits. So far he had got 20 for men at sea, most on minesweepers, 2 Airmen, and 19 in the Army. He considered (5-1) the “spiritual provision for those poor fellows is shocking”, provided as they were only with meagre 20-minute English-run services: “Our boys know better.” And again he was concerned with the sinfulness of the times bringing divine retribution. On 11-1 he wrote to the Glasgow Herald re cutting down on luxuries, deploring the financial and moral waste of drink, betting and amusement orgies: “frivolity, intemperance, desecration of the Sabbath run through the land”. 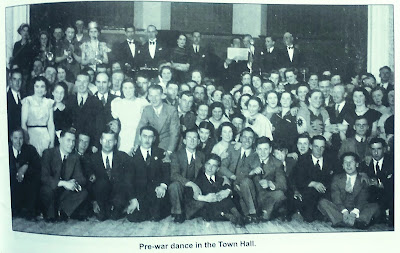 He took a detailed interest in the progress of the war and was ready to criticise its conduct in no uncertain terms, even at times with a bit of caustic humour. This was particularly applied to the local scene. Sometimes it was kind of personal - danger threatened in a direct way when the island was embroiled in the war effort.
On 19-3 he complained of “gigantic blunders”, and of how “our miserable PM (Chamberlain) has betrayed Abyssinia, Spain and Czechoslovakia....” But this did not absolve anyone from responsibility: “Oh that Britain would repent!” was a frequent wish, as on 10th June when Italy joined in the war, and he thought "Unless the Lord intervenes, we are likely to go under." Very soon things looked still worse, in a way that affected some of the townspeople directly:
(This links with the story of the Highland Division left in northern France after Dunkirk.)
*p.327 note 1 refers to the Ross Mountain Battery: "In 1940 it was part of the Highland Division serving in France." See also SY Gone By no.49 p.29 - "The whole area [called The Battery in Stornoway] was named after the RNR Battery based there [1878-1819]... " This quotes a plaque erected "to commemorate the establishment of the largest RNR Battery and Training Depot in Great Britain..."
Ibid. p.30 The housing settlements at Battery Park (1905) and Sandwick Park (1921) were built through the Congested Districts Board, for crofters and fishermen... Sandy Matheson in Stornoway Gazette 15-4-2004. 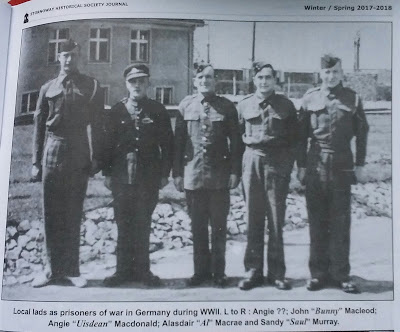 He became more concerned for the safety of those at home too:
As already seen, he was appointed chaplain to the RAF locally, and on 30-12 he “asked the R.A.F. Commanding Officer for a list of the men under my care, with their billets.”

1941 brought more on the same themes of the war’s progress, its local repercussions, and the need for spiritual regeneration, as paraphrased below. In June and through to September, he was focusing on news from the Russian front, his support for the Allies undeterred by atheistic Soviet communism.

19-3 … details of bombing of Glasgow. How inscrutable are the divine providences! How devilish are the ways of men! - 21-3 many of Grant St. congregation killed.
23-3 King has decreed a special day of intercession for the country. Preached, making special reference to the increased wickedness of the town since the war broke out; spoke very directly and forcibly to the young. Pointed out how the wickedness of Cromwell Street* was likely to bring divine judgment upon the town. Atmosphere was very solemn.
28-5 I was told by the adjutant that there are now 300 RAF in the Island: 255 Church of England, 26 Roman Catholic, 19 other. Danger of air raid. Naval vessels beginning to cluster here increasingly.
*The main shopping street in Stornoway, it could get a bit lively on a Saturday night.

11-6 Lewis promises soon to be an area of first-class importance militarily. More airmen are arriving daily and the work at the aerodrome seems to be on the grand scale. Another aerodrome has been begun at Ness...
25-6 Another German plane came over the town early this morning. It is difficult to understand the delay in sending us fighters when the runway has been ready for over a week.
The year ended on another sombre note:
30-12 Feel depressed... God's displeasure with this generation is to be manifested yet awhile. I very much feel the removal of our young people to munitions and other government work. The church services will be poor without them.
31-12 May next year bring in better things and end this awful war!

Better things did not immediately appear, with the fall of Singapore duly noted on 17th February, but in April in slightly lighter vein he drily recorded a "Dad's Army" moment:
(2-4) "Last night we had an invasion practice in which commando troops tried to seize the local aerodrome and the radio location station in Shader. It would appear that their effort was unsuccessful and that the Home Guard were too many for them."

Tragedy was not far away, however.
- 2-6 One of our promising young men missing over the North Sea.
Meanwhile distrust of the state's wartime leaders intensified:
The diary’s editor fast-forwards from the perceived turning point in 1942 to near the end of the war, telling us that MacRae continued to report and comment on the news, and recording (pp.350-351) that on “Peace Day” 9-5-45, marking “Victory in Europe”, he preached in the morning from Psalms to 290 people on “The Triumph and Overthrow of the Wicked” and in the evening to a congregation of over 300 on “Our Great Deliverance”.

The Notes for this sermon include:

I. Our Peril
II. Our Deliverance
1. It was entirely due to the Lord being on our side - we could not save ourselves.
2. But how do we know that? Did our wickedness deserve divine assistance?
(1) How could He be on the side of such wickedness as the Germans perpetrated?
(2) How could He be with those who persecuted the Jews?
(3) Humanly speaking, gospel light was largely dependent upon Britain...
III Our Prospects
. . 4. We should never forget that He can cast us down as easily as He raised us up.

When the war finally ended, MacRae recorded (14-8-45) “Peace … but … We have reason to rejoice with trembling.” Just over a week after the dropping of the first atomic bomb and 5 days after the second, his fears for the future may well have been more intense than those he voiced after the First World War – and with reason.
﻿
Previously...
Pawns in the War Game, 1940
In and Out of the War: the Free Church and Conscription, 1914-1918