Postscript to an old story: An Ealing CO in France, June 1916

Among the case studies of First World War conscientious objectors (COs) from Ealing previously considered on this blog was that of Frederick Cole Bromberger. His record on the Pearce Register, the online database of COs, shows that he experienced some of the most testing ordeals undergone by men who refused to kill. His inclusion in one of the iconic CO group photographs, reproduced in the 2014 edition of David Boulton's Objection Overruled, places him at the notorious Dyce camp, after he accepted "alternative service" under the Home Office Scheme rather than suffer repeated terms of imprisonment. This was not of course the end of his troubles, any more than it was the beginning.

Furthermore, reference to another source, (John W Graham, Conscription and Conscience, a History 1916-1919. London, 1922) published within a few years of the war and based on meticulous record-keeping at the time of the events described, reveals that he had already been involved in the even more notorious episode of the “Frenchmen” – COs who were sent to France where, if they disobeyed an order as such men routinely did, they could be court-martialled and sentenced to death on the grounds that their refusal had occurred “in the face of the enemy”. As is well known, 35 death sentences were passed and only commuted (to the usual "prison with hard labour") after protests and delays. It is less well known that a further seven COs, also sent to France, had “accidentally” escaped the same sentences due to their courts martial having taken place elsewhere, not in Boulogne. One of those was Fred Bromberger.

Although he was spared the psychological torture of a tardily commuted death sentence, Fred was inevitably subjected to harsh treatment, including the physical torture of 'Field Punishment No.1', which Graham notes (p.114) he suffered along with Harold Stanton, Harold Brewster and Jack Foister.

Among the 34 Graham lists (p.116) as sentenced to death is Oscar Ricketts, whose story has been told earlier as has that of Alfred Evans, the 35th so dealt with, who was sentenced later than the main group due to illness (Boulton, Objection Overruled, 2014, p.xxx); like Bromberger, both were Ealing residents at the time of their conscription. On being returned from France, all three were sent to Dyce along with a number of the other "Frenchmen". Many subsequently proceeded to Dartmoor and further tribulations, but also to encounter well-attested comradeship and mutual support in continued resistance. 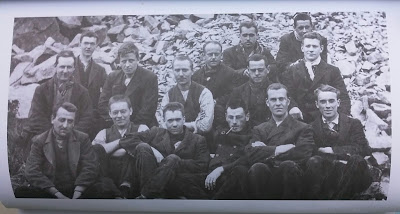 Unlike Alfred Evans, whose subsequent career is well documented, and Oscar Ricketts, who appears in postwar British records (1939 electoral register, 1981 deaths), not much had hitherto been found about what happened to Fred after the war.
But further research indicates that like them he survived, at least into his mid-50s, and that he emigrated to South Africa:

It all fits, as do the personal details of three later outward voyages, 1927, 1934 and 1949, showing that he returned several times to his native shores, although the absence of a UK death record suggests that he did not come back to stay in Britain. In 1927 he was still a Missionary, but by 1934 (and in 1949) had become an Accountant. He also acquired a "Mrs. Bromberger", aged 23, who travelled with him in 1934 (but not 1949). Their "last known address in the UK" was Fred's old home in West Ealing, 10 Sutherland Avenue, W13.