Jones, Arthur Morley 24, Grove Avenue, Hanwell, London W.
Arthur Morley Jones was 31 in 1916, (d.o.b. 14th May 1885) and married (since April 27th 1915). The first Military Service Act of early 1916, under which Alfred Evans and Oscar Ricketts were conscripted, applied only to single men aged between 18 and 40. A few months later conscription was extended to married men, many of whom had “attested” their willingness to serve when called upon, in accordance with government exhortations and no doubt often in the hope that the eventuality would not arise. The right to claim exemption on various grounds, conscience being the sixth of these, ‘F’, remained, and the system for dealing with such claims had developed its own bureaucracy.

Arthur Morley Jones, however was “Not attested” when he appeared before the Local Tribunal in Hanwell to claim exemption (Central Military Service Tribunal and Middlesex Appeal Tribunal: Minutes and Papers, Case Number: MS113. National Archives http://www.nationalarchives.gov.uk/).
Although his conscientious objection was recognised, like Evans and Ricketts he was granted exemption from combatant service only, and like them he appealed, unsuccessfully, against this decision, claiming “absolute” exemption. He signed his ‘notice of appeal’ form on 5th July 1916, when the Battle of the Somme, in its earliest days, was requiring fresh cannon-fodder at an unprecedented rate.
The scandal of the death sentences (commuted to 10 years’ hard labour) on COs was barely over, and its victims were being shipped back to further ordeals in prisons and work camps. As well as having lived in the same part of West London as two of those “Frenchmen”, Morley Jones was evidently a work colleague of one of them, Oscar Ricketts; both were employed by the London County & Westminster Bank, 21 Lombard St., E.C. In view of similarities between their statements it is interesting to speculate whether they had discussed the matter of conscription and what to do if it came, perhaps encouraging or influencing each other – or both may have been helped in this regard by the No-Conscription Fellowship of which Oscar is said to have been a member, as Jones may have been.
Notice of Appeal. (2) Grounds on which appeal made:
As I believe that the whole system of military service is contrary to the spirit & teaching of my master Jesus Christ, the partial exemption granted by the Hanwell tribunal is inadequate. I therefore ask the appeal tribunal to extend the exemption to include military service and all work connected with it.
[I should esteem it a favour if the appeal could be heard as late in the evening as possible so that my absence from the Bank may cause a minimum of inconvenience.]
(Signed) A Morley Jones          July 5th 1916
Reasons for the decision of the Local Tribunal
Tribunal satisfied that applicant has a conscientious objection to Combatant  Service, and so exempted him from such Service . Signed by Chairman, 10th July 1916.
For Appeal tribunal:      Appeal dismissed 18 July 1916 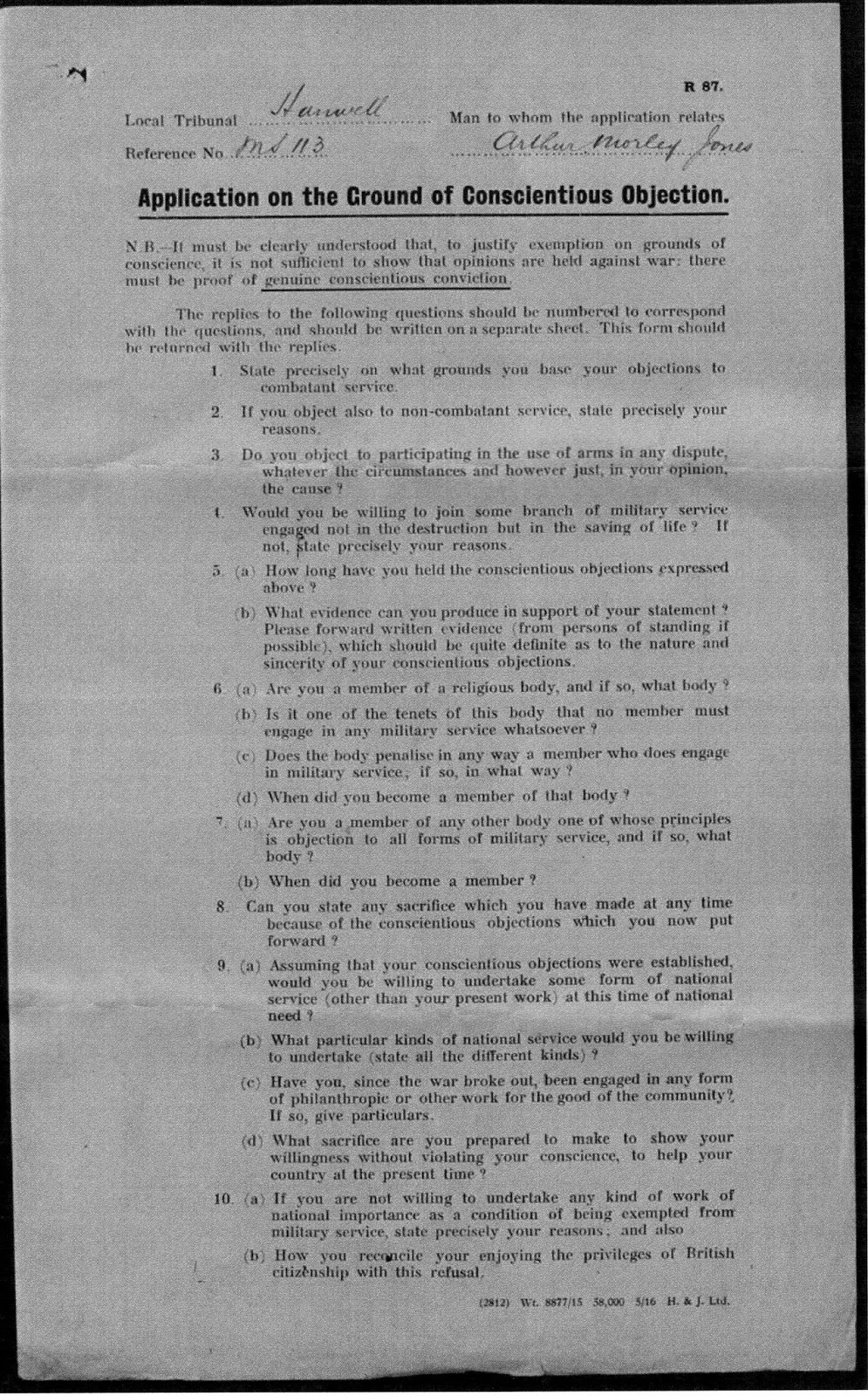 The tribunals by this date are asking for more information from applicants than earlier in the year, so that we learn from the Local application (21st June 1916; non-combatant service granted 3rd July)  not only Morley Jones’ birthday and date of marriage as above, but the fact that he had worked for the same Bank since he left school, starting on 2nd May 1904.
Applicants are now being warned that “it is not sufficient to show that opinions are held against war. There must be proof of genuine conscientious conviction.” (Heavy underlining in original). To establish this they have to supply numbered  answers relating to ten points (19 including subdivisions) asking about willingness to do alternative service, membership of anti-war religions and groups etc. and ending with 10 (b): [If unwilling to undertake any work of national importance] “How you reconcile your enjoying the privileges of British citizenship with this refusal.” Fortunately there were  N-CF classes on dealing with this sort of thing. It may even have helped to articulate and disseminate opposition to the war as well as becoming a valued resource for researchers 100 years later.
Some of  Morley Jones’ Replies are as follows:
2. Combatants and non-combatants are all part of the same military machine whose aim is to kill and wound, I cannot therefore distinguish between them.
5. (a) [Have held these opinions] As long as I have been old enough to hold any opinions at all.
(b) ... I have never regarded the question as debatable from a Christian standpoint and have no recollection of having discussed it.
6. (a) I am a member of the Baptist Church.
(b) Until the present war I took it as a matter of course that it was [a tenet of this body that no member must engage in any military service whatsoever].
9. (a) My work at the Bank leaves me very little spare time, otherwise I should not be unwilling to do anything I could to help my country in any non-military way.
(c) I hope that all the work I do is for the good of the community.
(d) I will stand by my convictions whatever the consequences may be.
In an accompanying letter dated 29th June he pointed out the difficulty of attending the hearing at short notice, and explained he would be unable to  attend the related Advisory Committee to which Mr Alfred Hill (Heath Lodge) had invited him that day for the next, reinforcing the point about long hours at the bank:
No doubt you will quite understand the position of banks at this time of year – tomorrow  I shall not leave the office till about midnight, and it would probably be about 10 o’clock before I could get away on Monday... [Asking if the case could be postponed for a week] when I could leave the office in time to be at the tribunal by 8.30 without too much difficulty.

Note from Military Representative (there was one on each tribunal)
This is a claim on the ground of conscientious objection, which I must leave to the tribunal.
(Signed) James Morley, 1st July 1916.
(Presumably the fact that his surname and Jones’ middle name are the same is coincidental).

The Appeal hearing was scheduled for 18th July at 2.30 in Guildhall. Two days letter the notice of its decision (“dismissed”) was sent to Jones, and to the Local Tribunal n Hanwell. The same day (20th July) AMJ completed in duplicate the notice of last-resort appeal to the Central Tribunal, restating his absolutist position:
1. As I believe that all war is contrary to the spirit & teaching of my master Jesus Christ,. I can under no circumstances become a member of the “Non-Combatant Corps.”. In the words of a letter sent by the Friends’ Service Committee to the Prime Minister, my “objection covers any form of military service, combatant  or non-combatant , and also any form of civil alternative under a scheme whereby the Government seeks to facilitate national organisation for the prosecution of war.”
2. That I am spending my whole time on work which is admitted by te City of London tribunal to be of national importance, and there is no other work in the doing of which I could be of such effective service to my country at the present time.

Across the bottom right-hand corner of the form, diagonally, handwritten:
I do not recommend leave [to appeal]. If any force is to be given to our direction that there must be Sacrifice of some Kind – then this man has really no appeal whatever. Should be required to serve in the Non-Comb. Corps. [Signed] H.Nield, 24 vii 1916.

Any sequel must await further research, and/or the anticipated online availability of the Pearce Register* of British COs.

*AMJ is not listed on a spreadsheet from an early version of this database – except possibly as “Jones, M.” – an Absentee whose arrest was “reported 5.9.16”, no source given). This Jones is placed in Hanwell Urban District but under county “Middlesex (Oxon.?)” – a confusion of Hanwell with Harwell, perhaps? Among the Middlesex Tribunal records only AMJ’s case seems to match; those for "Oxon." (Oxfordshire) have not survived.
Almost all Tribunal records were destroyed, the exceptions being those of the Middlesex Appeals Tribunal, and in Scotland* Lothian and Peebles (as a sample set) and the Isle of Lewis (by chance). 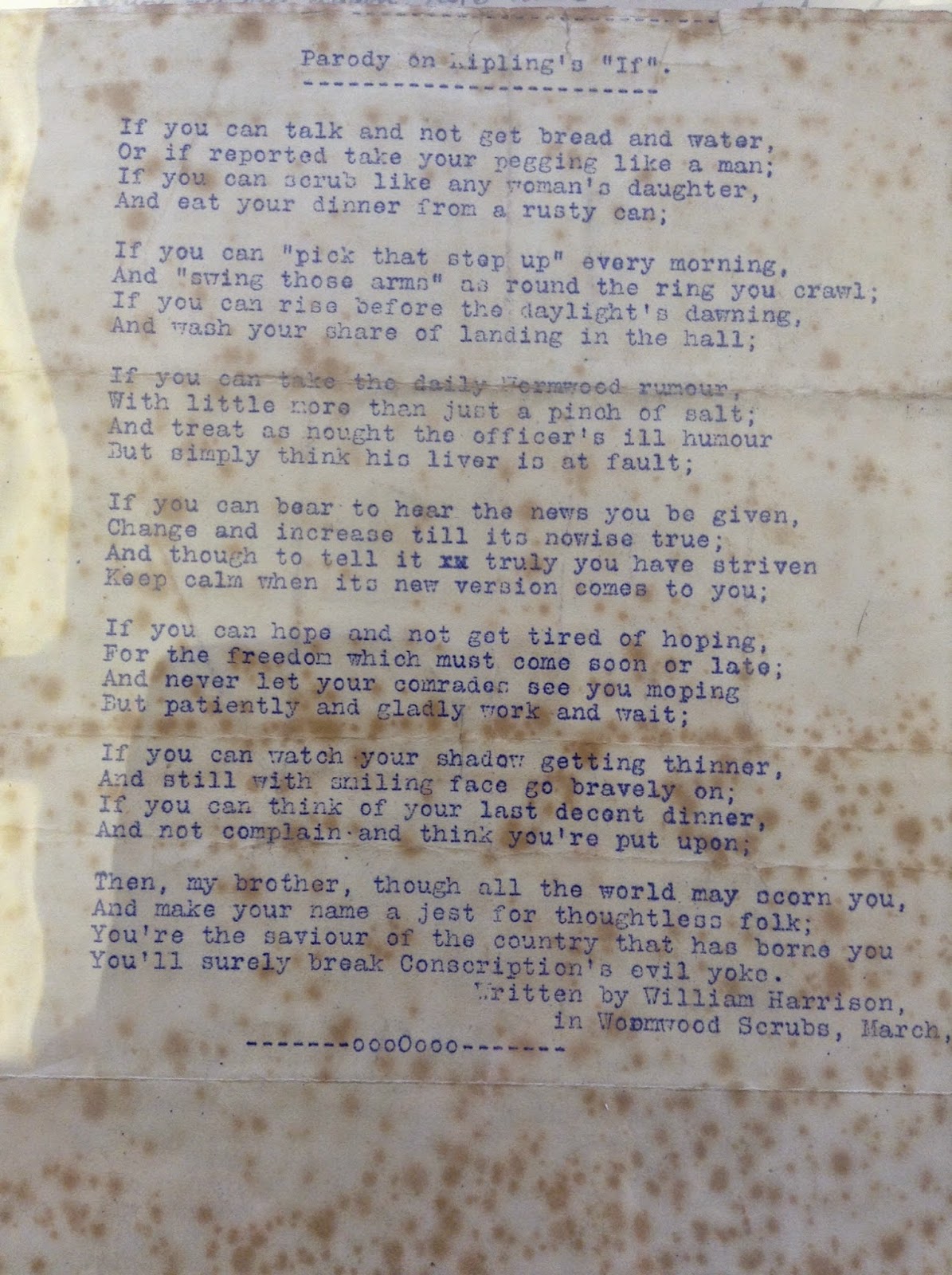 May 2015: The IWM version of records from the Pearce database shows that Alfred Morley Jones had a brother, Sydney Langford Jones, who also lived in Hanwell and was a CO - more on this to follow.
Posted by SmothPubs at 04:33