When the NHS came to the Isle of Lewis

Thoughts of Calum Smith on the impact of the National Health Service on his home community.
(Some of these may relate to the Highlands & Islands Medical Service, forerunner of the national organisation.)
From an unpublished letter written in July 1990:-

[...]
About your query reference the National Health Service, my recollection is of a revolution in attitudes towards the seeking of medical attention. No longer did sufferers have to wait until at death's door, before calling a doctor, because of fear of the subsequent bill. Now immediate attention was freely available, with specialist or consultant expertise if required. A far cry from the days when, for example, in many villages, the only midwife available was an untrained local woman whose only claim to any qualification was personal experience. In my own family [myself and four siblings] were all delivered by Eilidh Mhor (Big Helen), a near neighbour. It was only after we left Shawbost and moved to the outskirts of Stornoway that my mother had the benefit of a District Nurse to help her.
But always there was the prevalent fear of doctors' bills - probably stimulated in the Hebridean mind by the recollection of the drastic consequences that could follow any form of debt incurred, especially non-payment of rents. Your great-great-grandfather [named] was evicted from his croft in Uig for rent-arrears, and landed with his family on the inhospitable Atlantic coast at Shawbost. your great-grandmother [named] was twelve years old. (A digression!)*
But among the G.P.s in rural Lewis there were some Robin Hoods - they made sure they were well paid by those who could afford it and sent no bills at all to the very poor. In fact my sister [A] tells me that there was one practitioner (who shall be nameless), who when he sent his bills actually sent a receipt to my mother.
But in spite of all the generosity and dedication of many G.P.s, the great reluctance to ask for help remained.
So I suppose the main impact of the introduction of the Health Service was the realization and acceptance by ordinary people that medical help was available and that they did not have to count the cost.
I hope that this is a help [...]

* For background on the rent-arrears trap and its dire effects, see :-
1851 Diary by the Chamberlain (landlord's agent) - 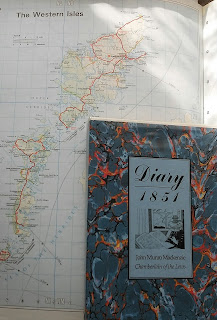 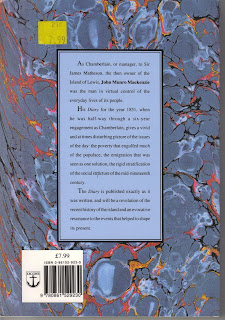 p.20 Thursday 23 Jany.  Wrote to the Lochs, Uig and Barvas Ground officers at considerable length on emigration, stating the offer made to the people by the Proprietor and directing them immediately to make a tour of their several districts to ascertain what number will be got to emigrate volun[t]arily -- There are two classes I would propose to emigrate, first of all bad payers, say those in two years in arrear of rent if able bodied & have no reasonable grounds of excuse for being so far in arrear -- Secondly -- I would propose to clear whole townships which are generally in arrear and are not conveniently situated for fishing and can be converted into grazings several of which are in the Parish of Uig...
p.32 Thursday 13 Feby.  Walked to the Manse of Uig... Went to the Parish School & found it quite crowded there being more than 40 schollars [sic] present, and on enquiring the cause was told that Mr Watson gave notice to the people that unless they sent their children to school he would pindfold *[sic] every sheep & cow of theirs he found on his grass – He expects to get the parents to attend his Church in the same way but I fear he will be disappointed -- Met with the people of [4 place-names] and explained to them the condition on which they were to emigrate... We fixed on sending four families from Braenish none consenting [further details follow]... The greater part of the people fixed on today for America are even now destitute of food, several families have not even one meal of food -- Carnish should be cleared altogether....
"*[pinfold] ...To confine in or as if in a pinfold. [Middle English pynfold, alteration of Old English pundfald : pund-, enclosure + fald, fold.]."

"No seer foretold the children would be banished/
That a degenerate lord might boast his sheep."
- Canadian Boat Song
also 13/2 (p.32)  [R]eceived a dispatch from the Sheriff with a parcel containing the Census papers -- With Mr Camerons [sic] assistance divided the whole island into enumeration districts...
Friday 26 [September]  Proceeded to Shawbost... North Shawbost is one of the largest townships in the Lews, a portion of it occupied by people removed from Uig who I hope will do better here than in their former holdings... There are several in North Shawbost who I fear cannot pay rent...
Ruthless as some of the above statements may sound, Mackenzie was far outdone in this respect by his successor as Chamberlain (Factor) of the Matheson estate, whose reign of terror and eventual overthrow are described in: None Dare Oppose: The Laird, the Beast and the People of Lewis, by John MacLeod (Birlinn, 2011). The eviction to which Calum refers would have occurred in the latter's time as Factor, c.1859.


On medical services on the island before the NHS, see Stornoway Historical Society article:
Early Medical Men of Lewis 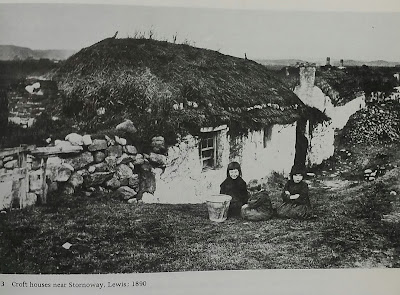