Guy Aldred: Speaking Up for a Chiswick 'Conchie' in 1916

One of the best known among uncompromisingly politically motivated FWW COs was the celebrated anarchist Guy Aldred. In early 1916 he was still based in London, living in Shepherd's Bush, although already associated with fellow opponents of the war in Glasgow, where he was to settle in 1919. He was a prominent speaker against conscription and supporter of those who resisted it while still at liberty himself. Because so few tribunal records survive we cannot know whether he spoke up for many COs at their hearings (this sort of advocacy does not seem generally to have been allowed) but there was at least one, James Churchman of Chiswick.

Since Churchman applied to the Middlesex Appeals Tribunal, there is a file in existence, free to download from the National Archives, containing not only his grounds for appealing against conscription, in his own words, but also some of what was said in his defence. 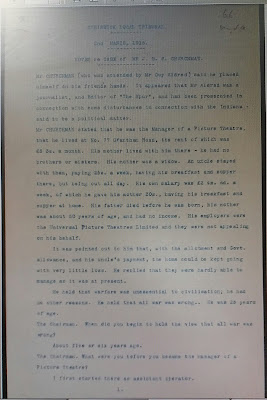 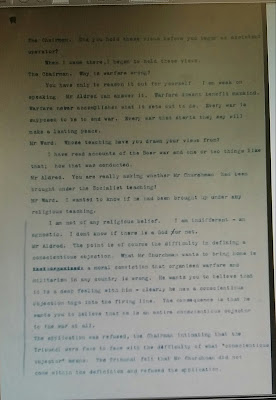 He asserted that the original Local Tribunal (LT) in Chiswick was wrong in claiming it was unable under the terms of the Act to decide whether his objection was conscientious. He further claimed that the Chairman’s known strong political views and conduct of the case had prejudiced the hearing. (p.4 in the file; dated 3-3-1916). For the  Local Tribunal the chairman described him as “averse to war" but not a bona fide CO, since his argument was "only" that war benefitted no one, and "did not carry conviction.”  (2-3-16).
In his application for exemption Churchman declared himself "opposed to assisting war in any way whatever" and also said he was an "only son supporting his widowed mother". (23-2-16)

The Chiswick LT, more thorough or forthcoming than some about its proceedings, supplied Notes on the Case (p.8) which give an impression of Aldred's contribution as well as some of Churchman's own words. Excerpts:–

Mr CHURCHMAN (who was attended by Mr. Guy Aldred) said he placed himself in his friend’s hands.  It appeared that Mr. Aldred was a journalist, and Editor of “The Spur”*, and had been prosecuted in connection with some disturbances in connection with the Indians – said to be a political matter.
After giving details of his family circumstances and being told the home could be kept going on less, he replied that they were hardly able to manage as it was at present.
"He held that warfare was unessential to civilisation; he had no other reasons.  He held that all war was wrong..   He was 26 years of age." Asked when he began to hold this view, he answered "About five or six years ago."
Asked by the Chairman "Why is warfare wrong?" he replied:
"You have only to reason it out for yourself. I am weak on speaking. Mr. Aldred can answer it. Warfare doesn't benefit mankind. Warfare doesn't accomplish what it set out to do. Every war is supposed to be to end war… Every war that starts they say will make a lasting peace."
Chairman's Q. Whose teaching have your drawn your views from?
A. I have read accounts of the Boer War and one or two things like that; how that was conducted.
Mr. Aldred. You are really asking whether Mr. Churchman has been brought under the socialist teaching?
Mr. Ward. I wanted to know if he had been brought up under any religious teaching.
CHURCHMAN I am not of any religious belief… I am indifferent - an agnostic. I don't know if there is a God or not.
Mr. Aldred. The point is of course the difficulty in defining a conscientious objection. What Mr. Churchman wants to bring home is a moral conviction that organised warfare and militarism in any country is wrong. He wants you to believe that it is a deep feeling with him - clearly he has a conscientious objection to go into the firing line. The consequence is that he wants you to believe that he is an entire conscientious objector to the war at all.
"The application was refused, the Chairman intimating that the Tribunal were face to face with the difficulty of what 'conscientious objector' means. The Tribunal felt that Mr. Churchman did not come within the definition and refused the application."

Churchman later wrote from his home address, 77 Grantham Rd., about an appeal by his employer on business grounds, saying they had been told there were no forms left and that they were too late. (It failed anyway). He appears to have resigned himself to his military fate rather than proceed inevitably to prison and the punitive treatment meted out to. Contrary to the Register, WO363 (First World War Service Records 'Burnt Documents') papers about him do appear to exist; although his name is transcribed as "James George Sturt Churchman", born 1890, from Barnes. There is a minimal 'record of service' (Royal Garrison Artillery) describing him as an electrical mechanic and giving his Chiswick address, and an 'Inside Sheet' about volunteering, also RGA, in 1919.

*Aldred's paper The Herald of Revolt had changed its name in May 1914 "because the workers need a spur". 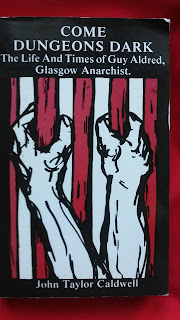 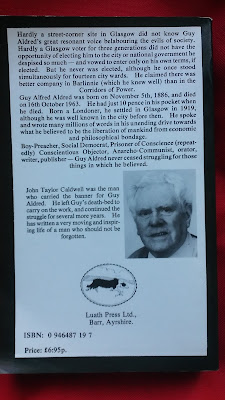 To follow: Some more about selected COs from Chiswick.