First World War COs: Another from Chiswick

COs who appealed on explicitly non-religious grounds against conscription are comparatively rare, especially when they do not make reference to another, political ideology. The case of one such from Ealing has already been considered here, and James Churchman may be counted too; the list of 29 "Chiswick" records from the Pearce Register supplies another.

Howard Travers, like his fellow citizen James Churchman, appealed at County level against the decision of the Local Chiswick Tribunal, so that some of his own words are available on file:
He made his appeal for total exemption, against the Chiswick Tribunal decision, on 4th March 1916 (p.6 in the file), stating:
"I believe warfare between nations to be a barbarous & discredited method of setteling [sic] international differences, and I look to the future common unity of the peoples of all nations. In my firm opinion war will not be ended by the use of armed force, which inevitably fosters and encourages a spirit of hatred and revenge, - but by an increasing number of citizens remaining true to their convictions & therefore refusing to take part in war, whatever the pretext for which it is waged." He had used the same form of words on his original application, dated 25-2-1916 (p.9).

The Local Tribunal (LT) justified its decision to grant exemption from combatant service only (ECS) by arguing that he had not shown sufficient reason for total exemption:
"Applicant objected to the military oath but was otherwise prepared to help wounded persons whether or not they were soldiers.
"Applicant was not of any particular religious body - his religion was his own ideal and there was no sanctionary ratification thereof except his self respect or his mind..."

Notes on his case indicate how far he and the LT Chairman were from a meeting of minds, the latter being fixated on the idea of "sanction" and denying any validity to the concept of an autonomous individual conscience uncoerced by an external "Power" and  unconstrained by fear of "peril" (hell-fire). The Military Representative and a Mr. Ward chipped in too, the former asserting: “If I had a conscience like yours, I should refuse to pay taxes” (thus implying that the CO was genuine). Travers defended himself articulately, making some telling points and exposing the prejudices and woolly thinking of his inquisitors, but his arguments were predictably unsuccessful. 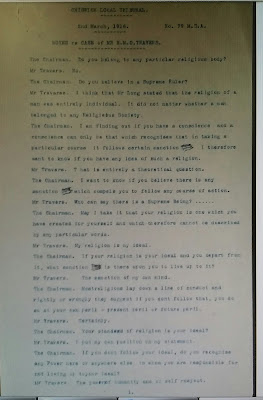 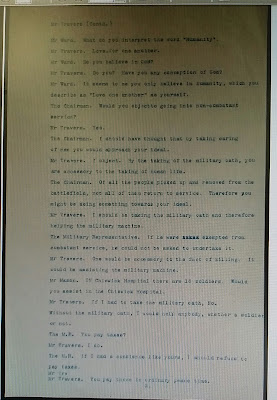 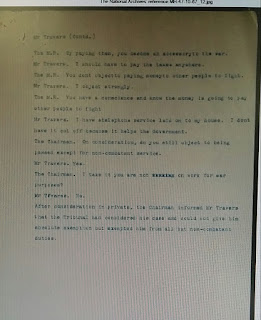 Howard Travers did not take the Middlesex Appeal Tribunal decision as final, and made a further application, for leave to appeal to the Central Tribunal. The Appeal Tribunal refused to grant this, as usual in their dealings with COs who rejected ECS.

The file contains a handwritten page about his work, in which he argues that it is "useful in an economic and commercial sense" and refers to some of it being exhibited, at the invitation of the Board of Trade, at the Ghent and Paris Exhibitions. He also claims to have made a special study of modern German work, and asserts his knowledge is of practical use. A typed letter from the Director of Art at the Board of Trade (Exhibition Branch) dated 4th April 1916 reports what has been heard from the Musée des Arts Décoratifs regarding the safety of the (unspecified) exhibits, which he is assured are in safe keeping, not in any danger, until the situation permits their transport. The Government, however, "in accordance with their usual practice will not insure themselves against their liability in case of loss."

On 13th April Travers wrote to Quaker MP and CO supporter T E Harvey, frankly emphasising his appeal had been on "moral - not religious grounds" and saying he had called at the office of the Friends Ambulance Unit  (FAU, Quaker) and found that their work was such that he felt he could very gladly contribute. The Secretary indicated willingness to accept his services, subject to the Authorities' agreement. This had apparently been withheld, and he asked for advice as to whether the decision could be reconsidered. That he was successful is confirmed by his record as above,  "FAU (Friends' Ambulance Unit) May 1916 to Jan.1919... Demob. 4.1.19." (Sources in Friends House Library, Euston).