During his time on Stornoway Town Council one of Calum Smith's main concerns was the provision of more and better homes at an easily affordable rent, what is now called 'social housing'. He used to point with some pride  at a small 'scheme' destined for older people, claiming credit for the decision to paint the front doors in different colours instead of all in one of the traditional darkish school-uniform shades. In his memoir Around the Peat-fire (Birlinn, 2001 and 2010) he described the inadequate conditions in which his parents had to raise their large family, and the surprise of finding them accommodated in a council house in Goathill Cottages (later Anderson Road) on his return from university. His future wife Peggy in a similarly large family had moved into a parallel street (Nicolson Road). Their respective parents and younger siblings were subsequently moved to Bain Square, Manor Park (Smiths) and Springfield Road (Fletts), still in council schemes.

In the mid-1950s the social housing sector was expanding in Stornoway as elsewhere to try to cope with postwar demand. At around the same time Calum, now married with two daughters, was faced with the loss of the family's accommodation after the death of Peggy's maternal aunt, in whose house they had been living (paying rent). They had been on the council waiting list for some time and were offered a new home in one of the first blocks to be ready for occupation in Kennedy Terrace. (Not, be it noted, as a result of undue influence; in fact a previous offer had been declined precisely because Calum did not wish to appear to be jumping the queue. He was still on the council, however, although not for very much longer, and there were some ill-natured mutterings.)

Their new house was at one end of a block of four. It had two bedrooms and a bathroom upstairs, a living room and kitchen downstairs. Several of the neighbouring households were new to town life, having come in from 'the country', Gaelic speakers and staunch Free-Kirk Presbyterians. Next door to Calum lived Captain Smith (no relation) of the mailboat, the old Loch Seaforth, with his wife and four daughters. As more families moved in around them the children of the Terrace soon got to know each other and developed their own ways of interacting. They communicated in English, with the occasional borrowing ('deoch' for drink), and a sprinkling of the Stornoway argot (two wing meek = tuppence ha'penny).
It wasn't a bad place to be growing up, notably good for street play, with very little traffic. Few people had cars. There was space in the cul-de-sac, with steps down to paths past back gardens to Leverhulme Drive, and a square of stubby grass where the watchman's hut stood until the buildings around were complete. In the early days unfinished houses were a site of illicit ploys, with the risk of being chased by the 'watchie'; later, he would sometimes invite a few children into his hut of a cold evening, for warmth and a 'yarn'.

A more approved pastimes (for girls) was skipping using a long rope (two wielding it, one performing in the middle) bought from the ironmongers (Calum spliced the ends of one for his daughter, using his wartime-navy skills) accompanied by the usual sort of chants (Scotland, England, Ireland, Wales/ All turned up like the monkeys' TAILS!), many preoccupied with supposed romantic prediction;, e.g.
'Gooseberry, raspberry,strawberry jam/
Tell me the name of your young man.
A - B - etc.'
(The intial at which you tripped up would be that of your 'boyfriend'. Then the traditional 'Tinker, tailor..' would find out his occupation, and 'Castle/ palace/ pigsty/ barn' where you would live.)

After the skipping season came 'doublers', using two multi-coloured rubber balls from Woolworths (they had to be the right kind) to test your dexterity and coordination against any fairly smooth vertical surface, usually that of the 'close' that ran through the middle of the block, for as long as the inhabitants would or could put up with the thumping. Refinements included overhand and underleg throws, clapping, and twirling round fast enough to catch the ball on the rebound, the game being not to let one fall. The actions might be performed in a prescribed sequence: Plainy, stooky, dummy, stooky-dummy, right hand, left hand, right leg under, left leg under... or to various rhymes.
One clasic chant for Doublers went like this:
"Are you gong to golf, sir/ No sir/ Why sir?
Because I've got a cold sir/ Where did you get the cold sir?
At the North Pole sir./ What were you doing there sir?
Catching polar bears sir/ How many did you catch sir?
One sir. two sir.." and so on.
On every 'sir' a special action (overhand etc.) would be performed, the winner being whoever could reach the highest number without missing a catch.

Meanwhile the wee-fellows (boys) might be kicking a football, 'scrapping', trying to make home-made go-karts go, or something. While some games such as the above were gender-specific, boys and girls would sometimes hang out together, kidding back and forth under the lampposts, chasing and hiding in groups or competing in activities in the swingpark. Once there was a play-off between boy and girl champions at jumping off a swing at its highest point and seeing how far you could jump. The boy won the token prize (choice of a penny toffee or Xcel chewing gum from Rossie's on Bayhead), but not by much (and the girl claimed to prefer the second choice anyway).

From time to time a mini-craze would take hold: hula-hoops; a version of hopscotch called 'Beds'; 'Truth, dare or promise'; slides and snowballs in the few really snow-and-icy winters; making 'spoogers' (water-pistols) out of lemon-shaped Jif juice dispensers...

On Sundays, of course, the most innocent forms of play (as well as all work - absolutely no washing out on the lines) were barred by majority public opinion, and even quite small children who ventured on frivolous make-believe in their own back gardens on the Sabbath risked solemn admonition from the peer group. On one memorable occasion a little friend hurled the scandalised accusation at one of Calum's daughters: "Your mother was singing on Sunday!" The defensive assertion that she was singing hymns didn't cut it, only psalms in proper places of worship were allowed. It was likewise considered scandalous by some when the Church of Scotland (Martin's Memorial) Sunday School summer treat was diverted to the cinema because it was too wet for a picnic, the 'pictures' being the work of the devil:"Surely the Minister wouldn't allow that?"

All the same another game involved guessing the name of the filmstar the other team was supposedly thinking of from shouted initials - DD could be Diana Dors or Doris Day - and popular songs of the time like the latter's 'Que sera, sera' were sung happily (except on Sundays), There were few counter-attractions to rival calling on friends and going out to play - television did not reach the island until 1959 - but plenty of influences from popular culture in the world at large, what with the Picture House, radio, Gazette, Sunday Post (but not until Monday) and the Weekly News (Saturday), not to mention relatives and visitors from Away.

Quite a few people had peats - renting a peatbank and going through the laborious process of cutting by hand, drying and turning in stages and conveying the peats to the roadside before they were taken home by lorry. On a fine summer evening this would be the occasion of a more traditional-seeming, almost 'folklorique' scene with neighbours, including children, rallying round and helping to carry the peats from the lorry in wheelbarrows and buckets, to be built into a stack near the back door by those most skilled in that art. The resulting tiredness, heat and dust were mitigated by the reward of tea and cake in the kitchen.

Behind the Smiths' block and the next one there was a large field, now built over, known as Macninch's Park, extending to Goathill across present-day Balmerino Drive. The gardens backed on to it, and the fences were easy to get through, to enjoy the pastoral setting and pick wildflowers, or make 'houses' in the long grass and among grain-stalks, or just for a short-cut. Capturing bees in jamjars (albeit with air-holes and flower-heads supplied) was popular for a time until discouraged by Calum on the grounds that these useful insects should be left to go about their business, When the field was being used for cattle, cows and the occasional bull would come up to the fence and accept offers of cabbage leaves through the widely-spaced wire, it is to be hoped without coming to too much harm. Some years a corncrake could be heard on summer nights, its distinctive 'skraak' quite loud in the back bedroom.

Other downside aspects, apart from the religious repression, were inevitable, squabbles, rivalries, name-calling, gangings-up and so on being more or less endemic among bunches of kids, and these were normal enough kids whatever their denominational (if any) background. It would perhaps be a mistake to depict any childhood as an unblemished idyll, and this was far from such, but there were certainly good points about it. In many respects girls and boys could have, by modern standards, a remarkable amount of unsupervised freedom, running round the streets till all hours in the long summer evenings, and often well after dark in the winter, in reasonable expectation of safety. 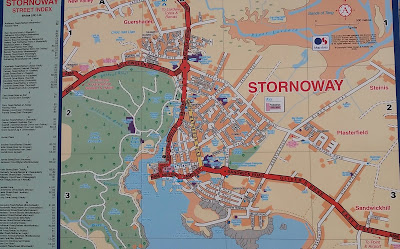