Note for fellow-pedants:
The title of this article was typed without the apostrophe, which is grammatically possible if 'struggle' is read as a verb, but it is more likely that the author would have intended it as a noun, i.e. 'struggle of Edinburgh tenants'.  (Authors' manuscripts were typed up on stencils for the duplicator, the main means of unofficial publication at the time.  Pages were then collated by hand in group sessions.) 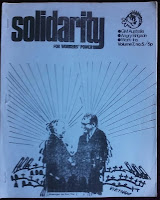 
On October 5 1972 Edinburgh Corporation voted to implement the Housing Finance Act. On November 20 rent increases of about £1 per week came into effect. Tenants' Associations have existed for some time in many parts of the city, and combined to form the All-Edinburgh Tenants' Association to oppose the increases. The decision was taken to withhold increases rather than attempt a total rent strike.

Door-to-door canvassing resulted in several hundred tenants signing a declaration that they were willing to join the collective refusal to pay the increases. Other actions have included demonstrations, pickets at rent collection points, street and factory meetings and production of leaflets and bulletins. Many of these are still going on.

But the promise of a couple of months age (when meetings of Pilton T.A., for example, could draw a hundred people, and street meetings in areas like Wester Hailes could draw 50 at short notice, with volunteers coming forward as convenors for their street or block) has not been fulfilled. External signs of commitment would not matter so much if tenants were deeply involved with the struggle on an informal basis - talking about it, knowing their neighbours were refusing to pay, and confident they might influence events.Unfortunately, it would be self-deluding to pretend that this is happening so far. The most consistently active seem to be those of us with a political commitment to supplement our commitment as tenants.

The problem is not, as the International Socialists have suggested, a 'crisis of leadership', but the question of what limits people's ability to dispense with leaders and take things consciously into their own hands. Although Local Authority housing brings people together in a physical sense, they are juxtaposed rather than being involved collectively. They have the same landlord, the same management in some respects, but the imposition of authority and the simultaneous necessity to resist it are much less obviously present than in the productive process. In each privatised compartment traditional values, fostered within the family, reinforce themselves and militate against initiative.

This situation is only made worse by the orientation of traditional left parties towards trying to get people interested in choosing 'better' leaders, instead of encouraging autonomy. Edinburgh was one of the places where the Corporation dithered about a bit before deciding to implement 'Fair Rents', so there was a lot of preoccupation with Labour Councillors - putting pressure on them, urging votes of 'no confidence' when they 'sold out' (as if one should have confidence in the others; as if one couldn't have every confidence in them to act as good Labour politicians anyway). And we still get the monotonous reiteration of the adjective 'Tory' before every reference to the Rent Act, with the implication that Labour should be voted in instead. Securing their own power would of course be the prime aim of any Labour politicians 'pressurised' into 'taking up the fight', i.e. invited to take it over (it's not, after all, their fight), defuse and defeat it.

Going along with this, the objective of linking tenants and industrial workers tends to be approached through orthodox trade union channels, aiming to influence the hierarchy instead of making it redundant. As someone said, if you want to talk to a trade unionist, don't go to Vic Feather (or even the secretary of the local Trades Council), go to the bloke next door. However, there has been some emphasis on the desirability of rank-and-file link-ups, not with a view to substituting industrial action for tenants' struggle but to bring out the common interests and potential for mutual support between groups artificially differentiated by the system.

On January 11 1973 the All-Edinburgh Tenants' Association changed its name to the Edinburgh and District Tenants' Action Committee, re-emphasising the aim of fighting rent increases. Provision was made for affiliated TU branches, shop stewards' committees and similar groups (not including political organisations as such) to have one voting delegate each, while each Tenants' Association has two. We hope this will help to get it together in a more dynamic form, but we're still hamstrung by constitutionalism which allows people to be alienated by their own previous decisions about office-bearers elected with no provision for recall, regular delegates whose absence leaves their areas unrepresented, and the diverse interests of community involvement. (As an example of what the last can lead to, one delegate suggested that something we might act on at an All-Edinburgh level was wall-slogans, because people were concerned about them; he didn't mean we should use them as a method of propaganda, but that we should exert influence on the Corporation to stamp them out!)

We have to combat the differences between tenants, e.g.'respectable' versus 'problem' families, as well as between tenants and other sections of the class. Only their collective involvement, consciousness and confidence can guard against incipient bureaucracy - and replace those of us who are self-selected activists.In the meantime, we can raise some of the questions basic to the tenants' situation: not only why sudden and escalating rent increases, but why we have no choice about where and how we live; why the division between workers in the home and workers in the factory; how much (or little) sense it makes and what we can start doing about it.