Founder of a Family Business

The Alexander Flett whose firm embarked on the Newfoundland Fisheries venture in 1907 was not the first nor the only one of his family to make a noteworthy contribution to the herring industry of north-east Scotland. That their surname became 'a name to conjure with' in the fishcuring context may be attributed to the energy and entreprise of his father, James, whose death in 1897 drew a remarkable double tribute from the county's weekly newspaper. 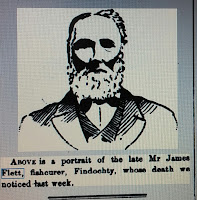 By the death of Mr James Flett, senior partner of the firm of J. Flett & Sons, one of the best known, familiar and striking figures has been removed from Findochty. Mr Flett was born at Findochty in 1817, and was thus in his 80th year. His father was Alexander Flett, his mother Margaret Smith, both of Findochty. He served an apprenticeship as cooper with the late Mr Taylor, fishcurer, Findochty. After completing his apprenticeship, he worked for some time as a journeyman with Messrs Walter Biggar & Co., who were the first curers to send Scotch cured herrings to the German markets. He commenced fishcuring on his own account at Peterhead in 1839, and at Findochty, his native village, in 1849. Mr Flett married Catherine Pirie, daughter of the late Alex. Pirie, who belonged to Banff, and who went to Findochty many years ago as manager for Messrs Walter Biggar & Co. His wife died on January 3rd, 1868. Mr Flett's family of three sons and five daughters all survive him. The sons are all in the business so long carried on by their father. Of the family to which Mr Flett himself belonged, the eldest brother, Alexander Flett, died in Findochty in 1892, aged 88. There still survives another brother, William, surnamed [nicknamed], from his uncommon strength, "Wallace". This nonagenarian celebrated his 90th birthday on 5th January of this year. The deceased gentleman was a man of splendid and striking physique. Standing as he did six feet three inches in height, no one could fail to notice him. He was of a kind and genial disposition, a great favourite with everybody in the village, particularly so with the young. Of children, he was very fond, and to run up to him in the street, seize his hand or his huge staff, was sufficient to dtaw forth a "sweetie," from his capacious pocket and a blessing fron his generous heart. He had a fund of quaint humour, and was known and respected throughout the whole of the North of Scotland. Few strangers went to Findochty without giving him a call.

Although he never took an active part in public matters, he was a keen politician. Some years ago, a navigation class was started in Findochty, under the auspices of the County Council. What was the teacher's surpirse one night when the class was gathering to see the venerable form of Mr Flett walk into the room, pay his fee, and enroll his name among the rest. Anything that looked like the more scientific working on the sea and of its products was to him a source of personal interest. A Liberal in politics, Mr Flett was a Free Churchman, He was a life-long friend of the late Rev. Robert Shanks, the first Free Church minister in Buckie, and a correspondence was kept up between them till the demise of the latter. A few years ago, less than ten, another well known figure was seen paying a visit to Mr Flett in Findochty. This was "La Teste", the Elgin poet, To hear these two comparing notes, or to hear Mr Flett calling attention to points of similarity in the life and fortunes of himself and "La" was no ordinary treat. In the death of Mr Flett, his own generation see another place left vacant never to be filled; while the younger race, deprived of his portly figure in the street, and the kind smile from his open face, will feel the place srange, and the town less homely. It may be mentioned that the last work on which the deceased was engaged was in arranging volumes of Spurgeon's sermons, copies of which he had from the beginning of their publication. Mr Flett was a great reader and had a love of poetry, his favourite author being Scott.

The funeral took place on Monday and was largely attended, the coopers carrying the coffin when it left the house and also at the grave.

-  Banffshire Advertiser, 21 January 1897
=================
The impression of warmth, sincerity and personal feeling in the above is reinforced by the author (possibly the same) of the paper's regular column of informal chat, local news and common-person views, written mostly in the Doric.

Willie -- I was unco' sorry to learn that ane acquaintance o' mine, in the person o' Mister Flett, fishcurer, Findochty, had passed awa' fae this weary warl' last week, Nae doot he's been spared to his family an' freens for a gie puckle longer than is the lot o' mony, bit for a' that fin death comes an' tak's awa' even the aul'est o' oor freens an' neepers, peer, frail, human natur' canna keep back the fa'in' tear or hide the pang o' sorrow an' regret at the pairtin'.
Geordie -- The curer 'll be unca mair missed in Finachty. He wis aye ready to help the needy, to cheer the dooncast, an' to encourage the young. Nae doot to some he may at times hae appeared to be caul' an' stern, bit fatever may hae been the appearance ootside there wis aye the warm, kin'ly heart within.
Jamie -- I speak from personal experience of the sympathetic heart which beat in the bosom of Mr Flett. Of course it would be sheer mockery on my part to say that he was perfect (the perfect man must be translated to some other sphere as it has never been my lot to meet him yet-------
Maggie -- I cud tell ye faur ye wid see him, bit I winna dee't evnoo.
Jamie -- There were many traits in the deceased's character which it would be well worth our while to seek to emulate, These points I need not dwell on now as they will readily come up before those who had the pleasure of his acquaintance. Of him I think it may truthfully be said

To all he was pleasing -- to auld and to young --
To the rich and the poor, to the weak and the strong;
He laughed with the gay -- moralised with the grave
The wise man he honoured -- the fool he forgave.

1841
James can be found at James Street, Peterhead, although his birthplace is given as Aberdeenshire not Banffshire. There are a lot of other people in the same 'household', possibly some kind of lodgings or digs for migrant or temporary workers as there is a range of surnames, ages and occupations.
His mother Margaret and father Alexander, White Fisher, were in Findochty, Rathven, both ages rounded down to 60, with Female Servant Janet Copland, 20; all born Banffshire.
His future wife Katharine (Catherine) Pirie was 12, living in Findochty, Rathven, with her sisters Ann, 15, Spirit Dealer; Margaret, 9; and Isabella, 6, born in England (others in Banffshire). Intriguing as Ann's apparent role is, most likely it was very temporary, their parents being away from home on census night. Alexander Pirie's occupation is given elsewhere as both cooper and 'vintner'.

1851
James, aged 33, Fish Curer, Unmarried, was living in Victoria Square, Rathven, with his now widowed mother Margaret Flett (née Smith), Stocking Weaver, Head of Household, and her two grandsons, Alexander Smith, 22, Cooper, and George Smith, 13, Apprentice Shoemaker. All born in Rathven (the parish/registration district for Findochty).
Catherine Pirie was 22, Unmarried, living in Road Leading West with her father Alexr. Pirie, Cooper & Vintner. born Turriff, Aberdeenshire (1795); mother Isabella, 50, born in Rathven; unmarried sisters Margaret, 19, and Isabella,15; also two grandsons of the household head - John Pirie Legg, aged 2, and Walter James Flett, 2 months. The latter was the acknowledged son of James and Catherine, the former possibly Margaret's son. Reputedly it was not unusual, and not socially unacceptable in the fishing villages of north-east Scotland, for a couple's eldest child to be born before their formal marriage.

Old Parish Records for Rathven 1821-22, 10th Dec:
Alexr. Pirie and Isabel Campbell both [residing] in this parish were matrimonially contracted
and after publication of banns were married.

1868 Sadly, Catherine died of peritonits, while still only in her 30s.

By 1891 Mary had moved on but Isabella, 28, was still unmarried and a Governess, living with James, now designated a Fish Oil Manufacturer (a new entreprise?), at Main Street (Rathven parish).

In 1887, John Bartholomew's Gazetteer of the British Isles described Rathven

In 1934 a review of the novel Bid for Fortune by James's grandson Joseph appeared in the Stornoway Gazette and decades later the reviewer remembered the book:

The ruse with the diamonds was a natural for Joe Flett. He belonged to one of the leading families in the herring trade.  Flett was a name to conjure with when I was young...  - The Hub of My Universe by James Shaw Grant. Edinburgh, James Thin, 1982. Ch. 41, 'They Hid the Diamonds in a Barrel'.