As well as Donald Maclennan, three other men from Lewis, as previously noted, appear on the Pearce Register. Their varying experiences in the First World War, according to the records on that database, are looked at here. In addition the Appeal Tribunal files for two of them have been consulted.


As in the case of Donald Maclennan, assignment to the NCC indicates that Donald Morrison would have been granted partial exemption (ECS - Exemption from Combatant Service only) by the local tribunal, probably in Stornoway. Since there is no mention of appeal, court-martial or prison in the case of the latter, it is likely that he accepted this, rather than being among the  "absolutists" who refused any form of military service. 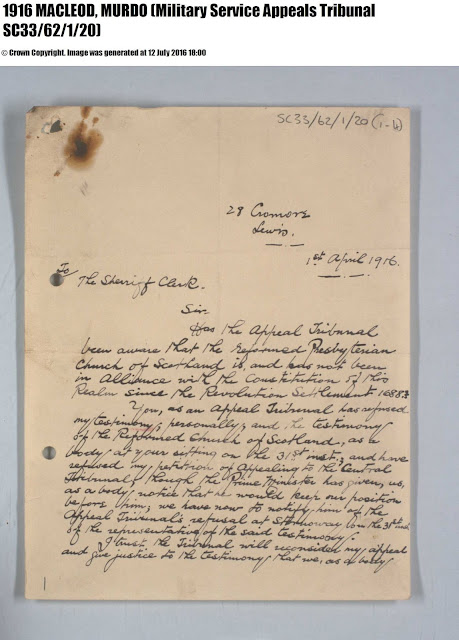 Appeal against Conscription, 1916 by Murdo Maclood, Conscientious Objector - Excerpts
The file is prefaced by a handwritten letter dated 1st April 1916 protesting against the decision of the Appeal tribunal (image above).
It may seem surprising that someone who described his occupation as “Fisherman and working on the croft” should display such a degree of literacy and specialised knowledge as is apparent in the letter and statements here, but only, perhaps, to those not acquainted with islanders of his generation.

Notice of Appeal. (Stamped, Stornoway, 20-3-16).
(2) Grounds on which appeal made:
(a) On grounds of my constitutional relation to “Second” Reformation in (1638016490 overthrown at the Revolution Settlement for which reasons, principally, we as a body are dissenters from Settlement, which testimony was issued by the Reformed Presbytery, first in 1761 renewed in 1777, and again in 1842, and publicly adhered to in “Chisholm’s Defence of Reformation Principles” (1913) with which I identify myself.
(b)   Since the Revolution Settlement the “Catholic Relief Bill” contrary to “Act for preventing the growth of papacy” in King William’s First Parliament Nov.23. 1700; again “Change in King’s Coronation Oath” 1910, and finally the recent “Special Envoy for the Pope”; for which reasons, I, conscientiously, cannot serve under the Military Service Act.
Murdo Macleod
13/3/-16
For Local Tribunal
The Tribunal after hearing the Applicant disallowed the claim but recommended him for non-combatant service.
Stornoway 11th March 1916
For Appeal Tribunal (Ross & Cromarty and Sutherland, Lewis Section)
Appellant heard, Appeal refused.
Stornoway 31st March 1916.
Leave to appeal further [to Central Tribunal] was also refused, the appellant not having stated any reasons sufficient justify a further appeal.
Reasons in support of the [original] Application *
I had accepted the testimony of the Reformed Presbyterian Church of Scotland, previous to the outbreak of this war, as published in the years 1761, 1777, 1842; and published and adopted in 1913 by that body of men with whom I identified myself, in a book “Defence of Reformation Principles”. The aforementioned position is against any part in this war.
This attitude had been taken up by us before any word was heard of this war.
Murdo Macleod
26/I/-16
*A longer written statement (4 pages) is on file, further explaining Murdo’s conscientious objections in terms of his religious beliefs:
… God has commanded rulers to rule “in the fear of the Lord”, and has given them explicit rules in His Word… and no ruler or government has any authority (that of a Tyrant) to enact laws, and force the same on people, which are inconsistent with the rules of the Word of God.
… I therefore adhere to the position of dissent…
… No power, can maintain the Kingdoms that rebel against the Great King
… For these reasons I can’t undertake to serve under the Military Service Act.
Decision of the Tribunal: [against which the appeal was lodged]
Stornoway 11th March 1916
The Tribunal disallowed the claim. Applicant recommended for non-combatant service and enrolled at once in the R.A.M.C. [Royal Army Medical Corps].
Murdo McLean Chairman.

His reasons, considered in detail, may be unique among COs; they are certainly unusual. The underlying principle of refusing to abdicate his conscience and responsibility for vital decisions was, however, shared by most if not all, and he turned out to be among the most resolute, as his record shows:
By Jan.1919 had served 4 sentences and two years.

In 1911 Charles was working as a "servant" while training to be a teacher, and living with his parents and sister (also a teacher) at 58 Borthwick Road, Stratford.


Five years later he was a science teacher in the Nicolson Institute, Stornoway, living at 28 Point Street. 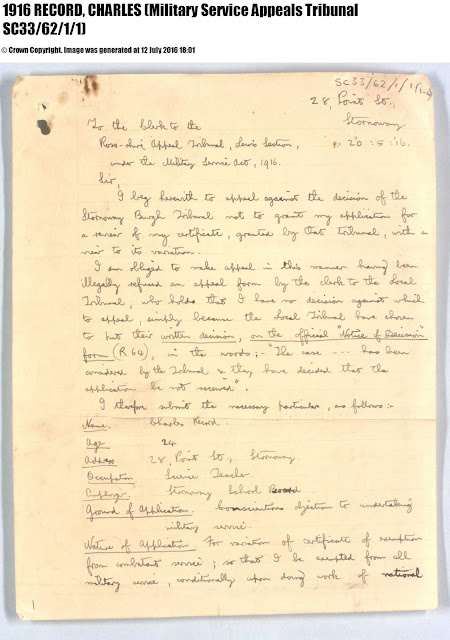 The file is prefaced by a handwritten letter dated 20th May 1916 protesting against the decision of the Appeal tribunal (image of first of two pages above).

Notice of Appeal. (Stamped, Stornoway, 20-3-16 [Same date as for Murdo Macleod]).
(2) Grounds on which appeal made: My application was for total exemption on grounds of conscientious objection. By granting me exemption from combatant service the Local Tribunal apparently admitted my sincerity.
I appeal for total exemption; so that I may not be compelled to assist in the taking of life.
In particular I appeal for exemption from work involving the taking of the Military Oath. At present I can disobey laws which conflict with my conscience, if willing to suffer the penalties. By taking the oath I surrender that right, by solemnly promising to obey all commands of the military authorities; thereby handing over my conscience to them. This is quite impossible for me; especially since I object to the purpose for which the military organisation exists, & therefore to most of its requirements. Even though I might never receive a command which conflicted with my conscience, I cannot make the offer to discard my convictions.
Charles Record
March 4th 1916
Reasons for the decision of the Local (Stornoway) Tribunal

For Appeal Tribunal (Ross & Cromarty and Sutherland, Lewis Section)
The Tribunal having heard the appellant refused the Appeal.
Leave to appeal [further, to Central Tribunal] was also refused, the appellant not having stated any grounds to justify persuasion [?].
Stornoway 31st March 1916. [Same date as for Murdo Macleod]

Reasons in support of the [original] Application
As a Christian I cannot undertake the responsibility of inflicting death.
My international ideals convince me that I ought not to take part in international disputes which involve the killing of my fellows.
I believe all occupations designed to assist the military authorities to partake of the same nature as actual combatant service.
[A written statement (in duplicate) accompanies the forms*].
Charles Record
*This is on file and reinforces the points summarised here.

What Happened Next
The Pearce Register gives details of the penalties Charles duly underwent in accordance with his conscience:
[Murdo Macleod - see above - was also sent to the Seaforths, and court-martialled at Ripon] 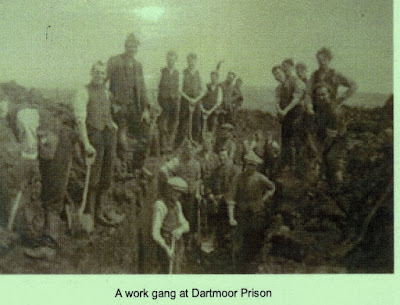