(partly based on an unpublished account by one of the participants, 30 or so years later)
See also: http://smothpubs.blogspot.co.uk/2014/05/fallout-from-french-nuclear-tests.html 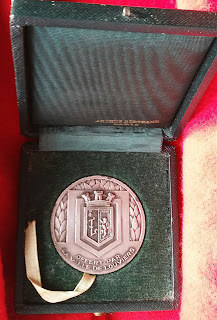 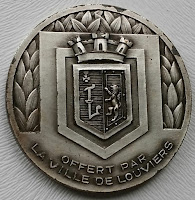 The French nuclear tests in the Pacific in 1966 did not lead to much audible outcry on the other side of the Channel. One group which took action was the Committee of 100, diminished and changed since the days of the Trafalgar Square mass sit-downs but still committed to direct action and civil disobedience in the cause of opposing nuclear weapons, whether "capitalist" or "workers'". A protest march was planned, to go from London to Paris in early July, timed to finish on the Champs Elysées on the 14th, Bastille Day. An advertisement was placed in papers like Freedom and Peace News asking for volunteers to take part.

It was rather short notice for such an undertaking at a difficult time of year, and only a few responded to the call from different parts of the country, including two students from Aberdeen. They arrived in London to meet together with the then secretary of the C100, who was herself a participant as well as organiser. The march set off on a sunny morning, headed for Brighton (the shortest way to the coast) and the Newhaven-Dieppe ferry crossing. Along the way, bystanders - when there were any - contemplated the placards adorned with Polynesian flowers, exotic names (Muroroa) and slogans in French, with the customary stares and occasional comments, generally showing mere curiosity rather than the hostility that Ban-the-Bombers often experienced and expected in south-east England (criticism of the French going down well, perhaps). Local supporters provided food and drink, overnight accommodation and sometimes company for a bit of the road. In Brighton there was also a meeting and a social under the auspices of the Labour Party left-wing and CND. Hospitality and comforts were appreciated but not without a degree of embarrassment, given that the Labour Party (Wilson's Labour government) and mainstream CND were prime targets of C100 militancy and criticism respectively.

Similar situations, only more so, arose in northern France when some - not all - support came from Communist mayors and local groups, although the C100 had been vociferous in opposing CP influence in CND (and elsewhere), and had even taken the message to Red Square. From arrival in Dieppe, however, the ambiance around the marchers was upbeat and encouraging, almost like a holiday in spite of their seriousness of purpose. Through Normandy to the outskirts of the capital they were surrounded by a fluctuating but by comparison with the English side substantial body of supporters and well-wishers including socialists, anarchists and the MCAA (Mouvement contre les Armaments Atomiques). These variously rallied round with al fresco meals and at least two more elaborate dinners, places to stay - an unoccupied flat, an empty hostel, their own homes - and morale-boosting reinforcement on long stretches of dusty road, frequently rounded off by a "petit tour de la ville", not always a welcome culmination to a tiring day.

Such a degree of popularity, even if still among a minority, was quite a novelty for the British protest marchers, who were not entirely at ease with it, being mostly of a libertarian persuasion and tending to expend a lot of their political energy on denouncing the traditional left. Some of the French of course shared their views, including a number of young men who were shortly to come up for conscription, and a certain amount of political discussion naturally went on along the way and in the evenings. Walking alongside others who felt strongly enough to make the same protest from a differing viewpoint was not much of a problem either, until their appreciation, if still not uncongenial, began to look like going somewhat over the top. All the same, just as it would have been difficult and discourteous to refuse the "petits tours", it was hardly on the cards to turn down glasses of Pernod and slap-up meals, try to evade the odd champagne reception organised by a communist mayor of a small town, or decline ceremoniously presented souvenirs, notably an ashtray (remember those?) from "Oissel-sur-Seine, la cité des fleurs" and a medal "offert par la ville de Louviers" (no-one had quite got round to getting it inscribed on the back).

On the eve of le quatrorze juillet

At the end of a fortnight's trek, the protest was on schedule to culminate as planned in a calculated attempt to gain maximum publicity with a strictly illegal demonstration down the Champs Elysées, challenging the patriotic fervour building up to the French national day. Up until then there had been few or no hassles from the police, and any opponents among the public had kept their distance. Realising that arrests would become inevitable, the demonstrators delegated one of the British to attend a press conference so that their version of what they were doing and why would be heard, whatever else happened. The rest and a larger number of French, (who of course were risking rather more, especially in the case of intending or actual draft-dodgers), proceeded with the demonstration. They were duly scooped in by the forces of law and order, but in a controlled fashion: "Une à la fois, et sans brutalité", an officer was heard to instruct, no doubt with diplomatic considerations in mind.

After a couple of hours spent by the arrestees in a large enough, though bare and overcrowded cage or wild-west-type cell in a police station, another of the British contingent, with about enough knowledge of French to do some interpreting, was summoned to hear their fate. Evidently not wanting to create a set of martyrs or get into international complications, the authorities let them off with a warning that if the offence was repeated, any British who took part would be deported, while the French would have to pay a fine. Since no-one had any ambition to become a martyr and they felt they'd made their point, this was agreed as understood, and the freed protestors returned in modified triumph to the scene of the crime, this time to unwind, reunited with their spokesperson and others. It was not quite all over; a petition against the tests was handed in to the Elysée palace for the attention of the head of state (de Gaulle); it's not known whether he attended to it at all, certainly the tests were far from over.

Thirty years later, the French state embarked on yet another series of nuclear tests in the South Pacific, and found themselves faced with a barrage of opposition from world opinion, on a scale and at a level for which they seemed to be unprepared. The widespread media clamour, diplomatic repercussions, calls for boycotts and mass protests within France and elsewhere contrasted markedly with this small group effort of 1966, perhaps suggesting that the world had moved on in some respects at least. And this time the tests were finally called off.