This blog has already looked at the cost to the Isle of Lewis of the First World War, and also at the situation of Conscientious Objectors (COs) to that conflict, in Britain generally and the London Borough of Ealing more particularly. Up until recently it has looked as though there were few if any Leodhasachs who took the courageous and perilous path of conscientious objection when conscription was introduced in early 1916, although there were many who applied for exemption on other grounds, particularly connected with their occupations: the hardship that would ensue if they were prevented from continuing their normal working lives, and/or the importance of those lives in the national context (e.g. food supply). It is with such cases that the Appeal Tribunal records from Lewis, among the few sets fortuitously to have survived, are mostly concerned. Not all applicants for exemption would have chosen or been allowed to take their cases to appeal if refused at the first hearing.

One young man, however, who was recognised as a "Class: A - Genuine" CO was Donald McLennan (MacLennan), a 20-year-old student from Balallan in the Lochs district. His is one of the only four records that come up on searching for "Stornoway" or "Isle of Lewis" on the nearly 17,500-strong Pearce Register, available via the IWM Lives of the First World War. (This does not necessarily mean there were no others; research on the subject is still on-going, with new names being discovered all the time).

What happened to Donald according to the record is as follows:
The NCC means that Donald would have been granted partial exemption (ECS - Exemption from Combatant Service) by the local tribunal, whether at home or wherever he was studying at the time. His court-martial indicates that this was not acceptable to him, so he may have lodged an appeal for absolute exemption that was refused.


His case came before the MST (Military Service Tribunal) Central Tribunal which was set up at the end of July at Wormwood Scrubs prison in London as part of the evolving policy for dealing with COs nationally. The Central Tribunal found him to be a 'Class: A - Genuine' CO, suitable for referring to the Brace Committee administering the Home Office Scheme under which COs were sent to work camps.


Above: Transcription from the Pearce Register


All are listed as having been born in Lochs, Ross & Cromarty, Scotland.

Donald John b.1895 would have been 21 in 1916 and is therefore the more likely to have been the CO, rather than his younger brother Donald. (It was not unusual, of course, for siblings to share a first given name; they would be called after different people and would be known by different forms of the name, initials or nicknames.)


The other three known COs from Lewis in the First World War were:
More on their stories later.


Postscript
The tragic story of Malcolm Martin is not included with the above, since his appeal was made on the grounds not of conscientious objection but on the basis of his having made his life elsewhere and not having been "ordinarily resident" in Britain at the relevant time for conscription. This was not allowed. He survived the hostilities but was drowned on the Iolaire.

Malcolm Martin, SC33/62/1/34 p2
“The appellant is a shepherd who came to Lewis on a visit shortly before the outbreak of the present war. He was not therefore ‘ordinarily resident’ in Great Britain on August 15 last and the Military Service Act does not apply to him. Further, he was engaged in his occupation as a Shepherd at Punta Arenas, South America and when making said visit to Lewis his intention was and is to return to Punta Arenas where he has a troop of horses and other property – all his property and interests are situated there and Some are now requiring Appellants personal attention”.


As he was not ordinarily resident and his business remained in Argentina, Malcolm applied for absolute exemption on grounds of serious hardship. His appeal was refused on 31 March 1916 “in respect that applicant doesn’t come within the exceptions specified in the first schedule to the Military Service Act 1916”. - from Case Studies on Scotland's People.

Like Donald Maclennan, Malcolm Martin was from Balallan (a place with a certain tradition of dissidence and activism - well within living memory in 1916), so it is is quite probable that they knew each other.

MY MOTTO
Dulce et decorum est pro patria mori
But not being patriotic, I’m afraid I don’t agree.
For if I had a motto I am sure that it would be 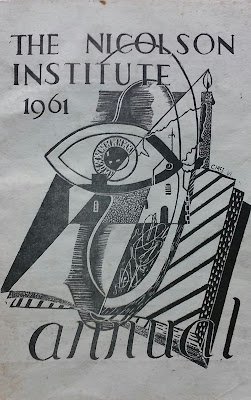 On the other hand:- 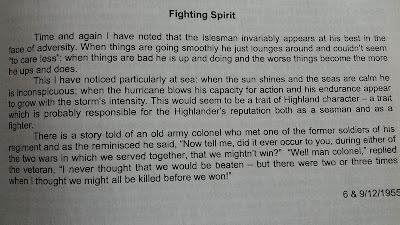 Mind you, in their way, the COs may be said to have had something of the same spirit.
Posted by SmothPubs at 05:42