Adapted from a memoir written initially for the author’s (AC's) family, and later copied to old friends, at least one of about 80 years’ standing.

On joining the R.A.F. I was sent to West Drayton to be kitted out. I little thought then that many years post war, I’d be back there… The next move was to Cardington in Bedfordshire for “square bashing”. There I saw the R100 Zeppelin anchored to its mooring mast. Not many folk can say they have actually seen a Zeppelin. The R101, her sister ship, was destroyed by fire in France with the loss of many lives.

After Cardington came the serious business of training at the R.A.F. wireless school at Yatesbury (Wiltshire). We were probably the last to train there because they then moved to Compton Basset. After attaining the required aped of 20 w.p.m. I was posted to Sullom Voe in the Shetlands. During the night, before we left, some nasty bugger stole the ration money from our uniforms (including mine – simple Simon). All that way with no money, and only the unconsumed portion of the day’s ration (one corned beef sandwich). That was the first time I ever experienced real hunger. On the St. Clair sailing from Aberdeen to Lerwick, an officer who heard of our plight bought us a meal. It tasted like nectar.

When we arrived at Sullom Voe, the camp had not been built, so we were billeted on a troop-ship anchored in the Voe. At that time the R.A.F.’s strength in Shetland was two Gloucester Gladiators based at Sumburgh plus two Londons and two Sunderlands moored in the Voe. I recall one incident when a French destroyer was anchored nearby. The Gladiators were flying their normal patrol, when the French opened fire, thinking they were enemy aircraft. The pilots were not amused. The Shetland workmen soon built huts for us, including a radio room, an ops room, and a transmitting station. There was one other Stornoway lad there with me. He was dead keen to be a w/op air gunner. After his air gunner course and on his first mission, sadly his plane was shot down.

After the Shetlands, believe it or not, my next posting was to Stornoway! I’ve got to say it twice – Oh What a Lovely War! Billeted in the Nissen huts on Anderson Road, across from where the market garden is now and working as NCO i/c (in charge of) the transmitting station at Plasterfield… 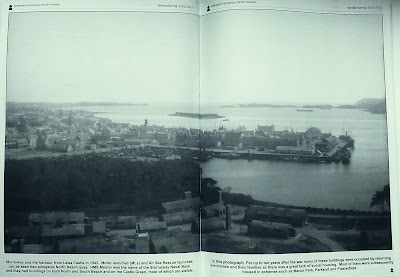 Nothing lasts for ever. After a few months there I was sent on detachment to Benbecula and then came my overseas posting. Ah well, at last they are sending me to fight the Hun and the Jap. Back to England for tropical kit out, thence on to the troopship, one of many ships in a big convoy escorted by the Royal Navy. Through the North Atlantic and its sub-infested waters without incident. Then the South Atlantic and of course the weather is getting warmer until at last we disembark at Capetown [AC’s spelling, consistently, as one word].

Afterthoughts
1. John Bull.
At Yatesbury my pal was an English lad from Windsor and believe it or not his name was John Bull. There we were allowed 48-hour passes. That was OK for those who lived in the south of England, but of course it was no use to me. John invited me back to his home in Windsor. I cannot remember much about it now but one thing has always stuck in my memory. When we were helping out with the washing up John’s father said to me – You obviously have not had much domestic experience, if you always dried your knives with the blade turned that way, your dish towels at home must be in ribbons.
After we passed out at Yatesbury we went our separate ways. John went to somewhere in England and me to the Shetlands. Some time after that, I learned that John was posted to Malta. Malta of course was British, and a very important naval station, but after Italy joined in the war it was bombed over and over again by enemy planes flying  from Sicily and Italy. John Bull was badly injured in one of those air raids and lost both his legs.

2. “Converted” in the Shetlands
In the newly built radio room, the communication receivers were R77s… Stone age stuff when you think of today’s communications. One of our receivers had been to the workshop a few times but it came back with the mechanics saying it was working OK. We at the sharp end would agree it was working, but not OK.
One nightshift I had a go at it, and using simple logic, found one of the valves was faulty. After that the signals officer called me in to ask what my experience was in radio, so I told him about Kenny Bain’s [shop in Stornoway] bikes, gramophones and radios. After a few more questions he said, I’m going to recommend that you be re-mustered to W/om (wireless operator mechanic). That was OK with me because w/om and w/ems were on a higher rate of pay. Normally you needed to go on a conversion course to re-muster. I was then transferred to workshops and transmitters – much better than sitting with earphones listening to dots and dashes..