Part 2, C. To Zululand and back

29th (November 1942) continued.      We were to be flown up country by catalina to man a radio link station at St. Lucia in Zululand. When we got to Congella we found the plans had been changed, and we will now be travelling by train, leaving at 2300h. tonight. We had a lot of time to kill so we went back to Durban. On Marine Parade we saw a miniature railway and from there we went to the Club. There I met Murdo Morrison from Laxdale (the Crackan’s* son). In the evening we went to a concert by the Durban Municipal Orchestra. Then to the YMCA and then to the station to catch our train. We travelled all night and at o630 we stopped at Empangeni for half an hour. It was just a small wayside stop, nothing much to see. When we started off again, progress was very slow, we stopped about every five minutes.

As we progressed into Zululand, I could see signs all around of primitive native life. The countryside is wild but picturesque. Here and there we saw native Kraal village; sometimes bullock carts drawing loads of logs or sugar came to the railway.

[* "The  Cracken" was a baker; "Crackan's biscuits" were well-known onthe Isle of Lewis]

30th      At 1030 we got to Mtubatuba, where we got off the train. This place consists of the station, a post office, 3 shops and some 7 or 8 houses. From there we have to travel by lorry to St. Lucia. The road must be the worst that anyone has ever driven on. It winds through jungle all the way. Nothing more than a track, and for us in the back, that 18 miles was torture. At times the 60 gallon drums of petrol in the back jumped up a good six inches.  By the time we reached the St. Lucia Estuary, we were absolutely covered in dust. The estuary had to be crossed by pontoon bridge. When the lorry was duly loaded, we were slowly pulled across to the other side by a gang of scantily clad natives, who chanted songs as they heaved at the ropes. When we got to the other side, we started off again on an equally bad track. On the way we passed a native village of 8 or 9 kraals surrounded by a stockade. 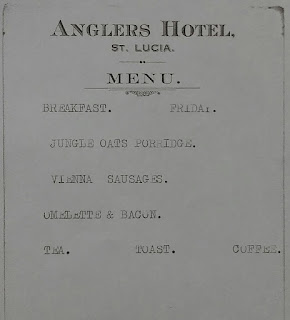 After a short time we stopped at the Estuary Hotel, where we had tea and generally cleaned up. From there we went to the Anglers Hotel, about half a mile away, where we were to live. It is almost unbelievable. Here in the heart of wildest Africa is a real European civilization. How pleasant it was to have some really good food and to have it served up to you on a table with beautiful clean linen and glistening cutlery. To have a nice hot bath and go to bed in a snug little room with a wardrobe and dressing table, snuggled between beautiful, white sheets. It made me realize how much I missed these things. What a marvellous war this is! How pleasant, at the end of the day, instead of going back to a rough and uncomfortable tent, to just go down to the lounge, there to listen to anglers’ tales or tales of a narrow escape from a croc or hippo. To listen to the radio from the depths of a massive armchair, or read a book on the verandah. Yes this is the life for me. The romance of the whole thing fires my imagination, so that I feel I am at last a real “pukka sahib – by gad sir”. Indeed so I am as far as the natives are concerned, they have had to treat whites with the utmost respect all their lives.  (31st here according to typescript, although this is supposed to be November; probably still 30th)  Went to the wireless tender to scout round, then Mtuba to do some shopping. Later went for a walk around the banks of the estuary, and found much of interest. Fruit grows in abundance here. All one has to do is just pluck it off the trees. I always thought pineapples grew on huge trees but now I see they grow almost on the ground.

1st Dec. (First mention of a month – AC).       Went rowing on the lake. It is a huge expanse of water, 60 miles long, I understand. I saw an occasional crocodile on the bank but they did not bother. When I saw some hippos in the distance, I turned and beat a hasty retreat. 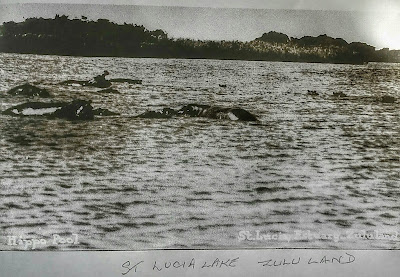 2nd        It may seem from all this that we did no work at all on this detachment but we did actually work some of the time. We operated from a mobile wireless tender at the south end of St. Lucia Lake to act as a link between Durban and a base camp at the north end of the lake. Radio conditions were sometimes very difficult in the jungle terrain. We operated a Canadian Collins transmitter while at the base camp they had a TR4. Today we were able to work Durban OK but not the base camp, because of an electrical storm. This evening there is very heavy rain and lightning.

3rd        It is still raining very heavily. Today we have received word that we are to rejoin our unit at Durban. That was indeed a very short detachment. I’d have been happy to have stayed much longer. Obviously the movement orders arrived sooner than expected.

4th        We were flown back in a Sunderland flying boat which landed on the lake. On the way back we saw a lot of flotsam and wreckage from a ship which had been sunk. There were also some bodies in the water. This brought home to us forcibly the fact that there is a war on. For the past two months it has been more of a holiday for us. One plane circled round and then carried on. Obviously someone else is dealing with this situation. We landed in Durban outer harbour and arrived, very subdued, back at Clairwood camp.

I have no record of events after Durban, but obviously it was troopship again…