Part 3 A. India and Burma


[The troopship] was called the Stirling Castle. More Indian Ocean then the Arabian Sea and onward to Bombay. We had a couple of hours to wait for our train so we just wandered round the streets and ended up in the red light district. Women in cages. Boy what a baptism. It was out of bounds of course but we did not know. What a baptism for us poor innocents. At length from Bombay to Karachi by train, stayed some time at Karachi, and thence to HQ Signals Command at Delhi. I spent between two and three years there as Sgt. i/c [sergeant in charge of] workshop. 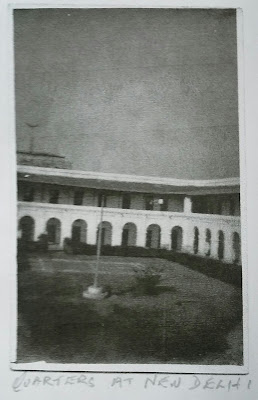 As I remember it I had two corporals and eight a/c or l.a.c. mechanics, one civilian mechanic – a Sikh called Jagut Singh and a Hindu called Shungloo. He had two wives and was always late in the mornings.  The section C.O. (Commanding Officer) was F A I Reid, ex-headmaster of Kyle of Lochalsh school…


While stationed at Delhi I can recall two very pleasant periods of leave spent in the Himalayan foothills, one at Nani Tal (Nainital), the other Simla. There was a short detachment when I travelled with a portable direction finding trailer first on a train to Barrackpore near Calcutta, then it (and I) were shipped to Cox’s Bazaar and then onward to Ramree Island in Burma. Thence back by air to Delhi. On my return I was posted as Sgt. i/c transmitting station. A nice little self-contained unit five miles outside New Delhi, where I remained until final repatriation.

The story of the Burmese trip

There are two systems of direction finding: Adcock, a system with four masts like the one at the Cockle Ebb (on the outskirts of Stornoway); the other is the Bellini-Tosi which has one central mast to support four aerials, north, south, east and west. Bellini-Tosi was the system I had in my two-wheel trailer. I was first sent to the factory where they were made where I had to assemble and calibrate it and the whole thing was packed into a two-wheel trailer. I had to get MV (Motor Vehicle) Section to supply a vehicle to tow it. Then I had to put it on a train to take to a Signals Unit at Calcutta.

Would you know how to put up a 60 ft. mast? I didn’t but I do now! First you lay it assembled on the ground, attach the aerials and support, then you attach a 15 ft. pole to the base of the 60 ft. one. You then raise that one to the vertical position. It has a block and tackle on it and as you lower it to the ground, it pulls the main mast up. You will of course need sufficient helpers to man the guys. That is a piece of brilliant information I’ve never had to use again. When it is all assembled you have to calibrate it using a single generator and compass.

The interesting part was getting it there. It was at the time when the Japs were retreating and the unit it was for had moved on. Then I headed for Chittagong and found they had moved again. Next I headed for Akyab to put it aboard a tramp coaster to take it to Cox’s Bazaar but again they had moved on and I eventually caught up with them at Ramree Island in Burma where I eventually assembled and calibrated it.

While I was there we had a Jap air raid but it was just small bombs which did not do much damage. An interesting thing I saw there was a Buddhist temple with about 100 Buddhas of all sizes all with their heads chopped off by the retreating Japs.
All this time while I was away from my unit I did not get paid so I had a nice little nest egg to get back to. After the war I got the Burma Star medal but it was not down to this adventure, all the troops in Burma got that.